Natalie Egenolf: By letting Tyreek Hill play, NFL continues to prove it only pretends to care about domestic abuse 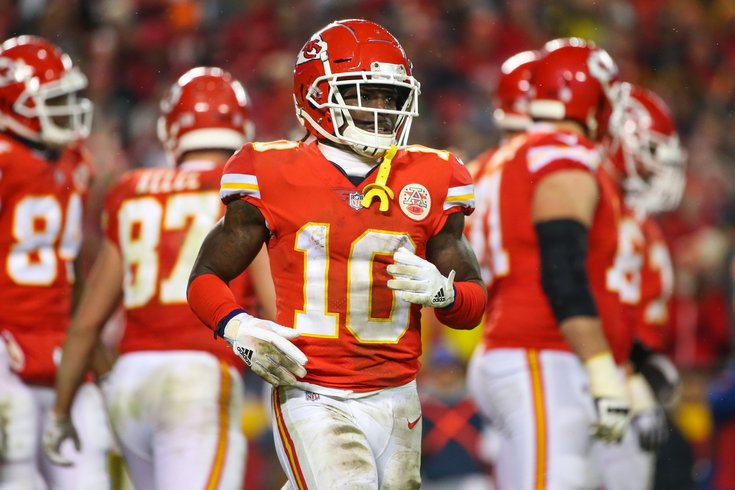 Tyreek Hill is not facing a suspension this season.

Another football season is finally upon us, and while fans around the country begin the countdown to the regular season, another story of domestic abuse in the NFL has gotten buried in a news cycle dump just days before training camp.

It's an embarrassing issue that the NFL can’t seem to get a grasp on. They pretend to care. Yes, I said pretend. Because, let’s be real — the NFL has never cared about domestic violence.

They still don’t and they aren't fooling anyone, which is why the Tyreek Hill case will still linger in our minds when he takes the field, and some fans will have to grapple with their love of the game versus this morality issue.

Hill was cleared of any wrongdoing after a tape surfaced of him physically threatening his fiancée, Crystal Espinal, earlier this year. If you’re not aware of the tape, Espinal is heard accusing Hill of hitting their three-year old son and says their son is "terrified" of Hill. Hill then responds "You need to be terrified of me, too, bitch." (Hill pled guilty in 2014 to choking and punching Espinal when she was pregnant with their child.)

The conversation goes on and there are parts where Hill accuses Espinal of lying, both now and in 2014. No one will ever know the intimate details of their relationship; however, I have to wonder how the verbal threat of violence is not enough to violate the NFL’s personal conduct policy.

It was only one year ago that Deborah Epstein, professor of law and co-director of the Georgetown University Law Center’s Domestic Violence Clinic, and Susan Else, former president of the National Network to End Domestic Violence, resigned from the NFL Players Association’s commission on domestic violence. The commission was founded in 2015 in an attempt to try and tackle the issue after the Ray Rice video surfaced. Epstein wrote an op-ed for The Washington Post and cited her resignation was due to being part of a lip service organization, saying:

“When I was asked to join the commission, I told NFLPA Executive Director DeMaurice Smith that I was leery of associating with an organization that might just be paying lip service to the defining issue of my career — so that, in essence, the NFLPA could say it was confronting domestic violence abuses long enough for the Rice story to fall out of the news cycle. Smith assured me, repeatedly, that this commission would be a serious working group and that our efforts would help produce necessary reforms. But clearly that has not been the case. Authorizing a single study, and then burying it through a confidentiality agreement and shelving its recommendations does not constitute meaningful reform. Because I care deeply about violence against women in the NFL and beyond, I can no longer continue to be part of a commission that is essentially a fig leaf.” [Washington Post]

A fig leaf it will continue to be.

Only three weeks ago, the MLB suspended Phillies outfielder Odubel Herrera for 85 games after he was arrested for an alleged domestic violence incident on Memorial Day Weekend in Atlantic City. His girlfriend dropped the charges, but an MLB investigation decided the incident was enough to warrant a suspension for the remainder of the season without pay.

The court of public opinion will have their minds made up about Herrera if he returns to the MLB, but without a conviction this punishment at the very least sends a message to other players that there will be consequences for their actions.

Given that example from another professional sports league, how is it remotely possible for the NFL to say they care about domestic violence when Tyreek Hill’s on-tape verbal threat of assault against his fiancée warrants nothing? Not even a fine? There has to be a better way in the NFL.

They could at least pretend by setting some tangible example, since the commission set up by the NFLPA has been exposed to be nothing more than a “fig leaf."

Alas, another NFL season is indeed upon us and it seems to be business as usual.

I suppose we’ll look forward to the teams wearing pink in October as their tribute to women.

Where to get help: