The half-acre parcel overlooking the Brandywine Creek was sold for $1 to the Delaware Nation group based in Anadarko, Oklahoma 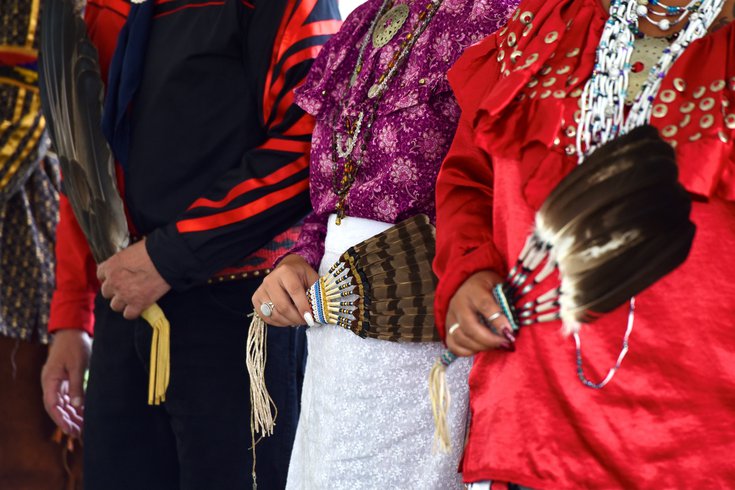 The only Native American burial site in Chester County has been returned to Anadarko, Oklahoma's Delaware Nation, one group representing descendants of the Lenape. Picture of members of the Delaware Tribe of Indians from Bartlesville, Oklahoma, who visited New Jersey in 2021.

The only Native American burial ground in Chester County has been returned to one of the many groups representing the descendants of the Lenape tribe.

The half-acre in Newlin Township, which until last month belonged to Carol McCloskey, was sold to the Delaware Nation based in Anadarko, Oklahoma for $1, according to Chester County property records. McCloskey had been trying to donate the land to Native Americans since last year.

“I find peace in knowing that the land will always belong to its rightful owners,” McCloskey told the Inquirer. “I knew that this day would come, but I had no idea how long it would take.”

Roughly 30 members of the tribe were buried on the grassy knoll overlooking the West Branch of the Brandywine Creek with their heads facing east, in accordance with the Lenape's traditional funeral customs.

After most members of the tribe were forced to flee their homeland, the burial site was rediscovered by white explorers in the nineteenth century. Some of the graves were dug up and at least one of the bodies was taken to Swarthmore College in 1899.

The land was recognized by the Chester County Historical Society in 1909, when a marker was placed on the site.

Two other Lenape historical sites are located less than a mile away. "Indian Rock," which sits near Northbrook Road, was a landmark that tribe members used to stake their claim to the area. There are also markers highlighting the former residence and grave site of "Indian Hannah." She was the last member of the tribe in Chester County and died in 1802.

McCloskey bought the site in 1987 as part of a larger parcel of land, much of which has been converted into subdivisions.

However, this last section of the parcel has a conservation easement, which means the land can't be developed and its taxes only amount to a few dollars a year. McCloskey decided to donate the site, but found it was a surprisingly difficult task.

After publicizing her desire to donate the plot, a large number of groups claiming Native American heritage reached out to her about taking the property. She had trouble verifying which groups were legitimate and which of them should be the site's rightful owner.

There are many different groups scattered across North America that have Lenape heritage.

Some, like the Anadarko tribe, call themselves the "Delaware," a term imposed on the tribe by European explorers. The moniker comes from the river, which was named for Thomas West, 3rd Baron De La Warr, who was once a governor of colonial Virginia.

As the Lenape and other indigenous people of the Eastern Seaboard were continually pushed west by Euro-American settlers, the tribe splintered. Today, the largest populations are in Oklahoma, Ontario and Wisconsin.

There were some members of the tribe who managed to stay in their historic homeland around what's now Delaware, Southeast Pennsylvania, New Jersey and the New York City area.

The Nanticoke Lenni-Lenape are clustered in Bridgeton in Cumberland County and Cheswold and Millsboro, which are both in Downstate Delaware.

The tribe is a confederation between the Nanticokes of the lower Delmarva Peninsula and the Lenape in northern Delaware and South Jersey. Many members of the tribe have heritage from both groups.

There's also the Ramapo Munsee Lenape Nation, which exists in Northwest Jersey and Upstate New York. When they had a pow wow last year, members of the Delaware Tribe of Indians – another group from Oklahoma based in Bartlesville, which is about a three-hour drive from Anadarko – came to participate.

Although the local tribes are recognized by New Jersey and Delaware's state governments, they are not federally recognized, which the groups in Oklahoma and Wisconsin are.

The Anadarko tribe did not immediately respond to a request for comment on Thursday.