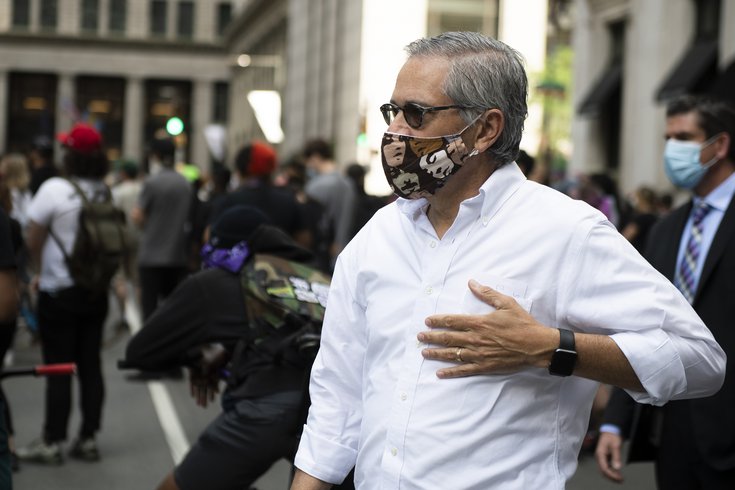 His election as the city's lead prosecutor was the focus of PBS' "Philly D.A.," an eight-part docuseries that is now among 60 nominees for the 82nd Annual Peabody Awards. The annual awards recognize media projects that focus on issues facing marginalized communities.

"Following yet another turbulent year, Peabody is proud to honor an array of stories that poignantly and powerfully help us make sense of the challenges we face as a nation and world," Peabody Executive Director Jeffrey Jones said. "Demonstrating the immense power of stories, these nominees exposed our societal failures and celebrated the best of human spirit. They are all worthy of recognition, and Peabody is proud to celebrate them."

"Philly D.A." took an in-depth look at Krasner's goals as Philadelphia's district attorney, examining his decisions to work with criminologists and other policing experts in his effort to reduce the prison population.

In his first year in office, Krasner reduced the prison population from 6,500 to 4,700, which advocates lauded as a delivery on his promise for justice reform. His opponents claimed it would lead to an influx of violent crime in the city.

Krasner has long scrutinized the Philadelphia Police Department, first as a civil rights lawyer and then as district attorney. In particular, he set out to end what he has described as a "corrupt" influence of the Fraternal Order of Police on the city and its government.

"As riveting as any TV show, this eight-part documentary introduces Larry Krasner, who spent 30 years fighting the district attorney's office as a civil rights lawyer before he was elected to the position himself — and thus faces the challenge of his life, trying to change the system from within," Peabody's description of the nominee reads.

The docuseries premiered on PBS in April 2021, but it did not appear within the Philadelphia market until after the city's general election concluded in November. Krasner was re-elected, defeating Chuck Peruto.

Ahmir "Questlove" Thompson has had a busy awards season. His directorial debut, "Summer of Soul (...Or, When the Revolution Could Not Be Televised)" has earned The Roots' drummer his first Academy Award, his 18th Grammy Award and six Critics Choice Awards, among others.

His documentary revisiting the "forgotten" 1969 Harlem Cultural Festival has now earned him a Peabody Award nomination as well. The "seminal celebration of Black history, music, and fashion," as Peabody puts it, has led to a resurgence of interest in the festival, which occurred during the summer of 1969.

The film featured live performances by Sly & The Family Stone, Nina Simone, Stevie Wonder and several other high-profile musicians and artists. The footage, which was mostly lost to history until Thompson joined the project, was preserved in stunning quality.

The festival will return to Harlem in 2023 at Marcus Garvey Park, Billboard reported, after co-founders Musa Jackson, Nikoa Evans and Yvonne McNair decided that it was important to "reimagine" the original 1969 festival and celebrate Black culture in a new way.

Thirty Peabody Award winners will be announced during a multi-day celebration from June 6-9. Winners will be revealed on Peabody's social media platforms with a short video posted between noon and 1:30 p.m. each day. These include Peabody's Twitter, Instagram, Facebook and YouTube accounts, as well as on its website.

The full list of Peabody Award nominees are listed below.

• "Summer of Soul (...Or, When the Revolution Could Not Be Televised)"