But the red-colored creature still needs a name. Football fans are being asked for suggestions 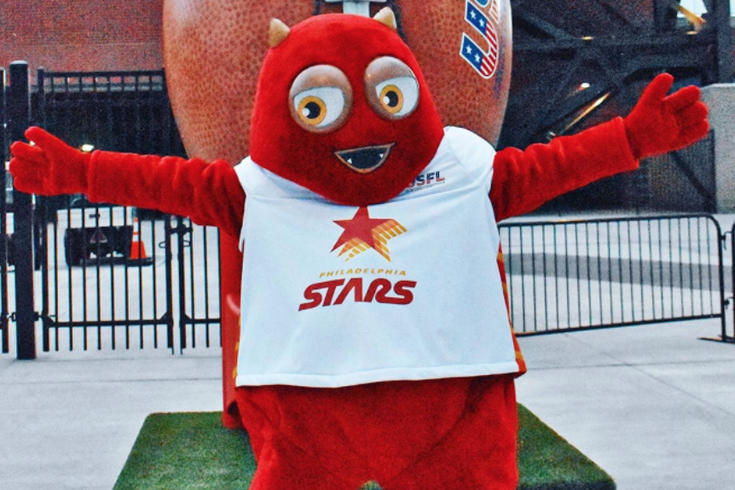 The Philadelphia Stars' new mascot will make its debut during the team's season opener against the New Orleans Breakers on Sunday.

The Philadelphia Stars will return to the field this weekend for the first time in nearly 40 years when a revamped version of the United States Football League kicks off.

Their return means the city is getting another mascot, and it's one that likely will remind sports fans of a few familiar faces.

The USFL revealed its mascots for all eight franchises Monday, and the Stars' mascot pulls from the appearance and behavior of the Phillie Phanatic and Gritty.

The mascot, who hasn't been given a name yet, is a red-colored creature with two tiny horns and a small mouth.

Like the Phanatic and Gritty, the mascot has massive eyes and is heavy-set. It also reps its team's uniform top – a white jersey with the Stars' logo across the front, a USFL patch on the top-right corner and the No. 0 on the back.

In the video, the mascot dances and spins around a bit before breaking out its own version of the stomach thrust that the Phanatic and Gritty are known to do. It also throws in a little twerk, a sure sign that it will fit in well.

What should we name the USFL’s clear best mascot!? ⬇️ pic.twitter.com/yrxqZ2OjFn

The Stars are now asking fans to provide possible names for their new mascot.

College football coach Jim Mora Jr. — whose father coached the original Stars team to the 1984 USFL championship — recommended "Mills," an ode to Stars linebacker Sam Mills, who went on to have a strong NFL career with the Panthers and Saints.

Whatever the mascot's name ends up being, this character could be enough of a reason for fans to tune into a Stars game this season. Who knows if the team will be any good, but if the entertainment includes a goofy mascot doing antics on the sideline, then sign me up.

The Stars will kick off their season against the New Orleans Breakers. at 4 p.m. Sunday on USA Network. Every game will be played in Birmingham, Alabama. Games also will air on FOX, FS1, NBC and Peacock.