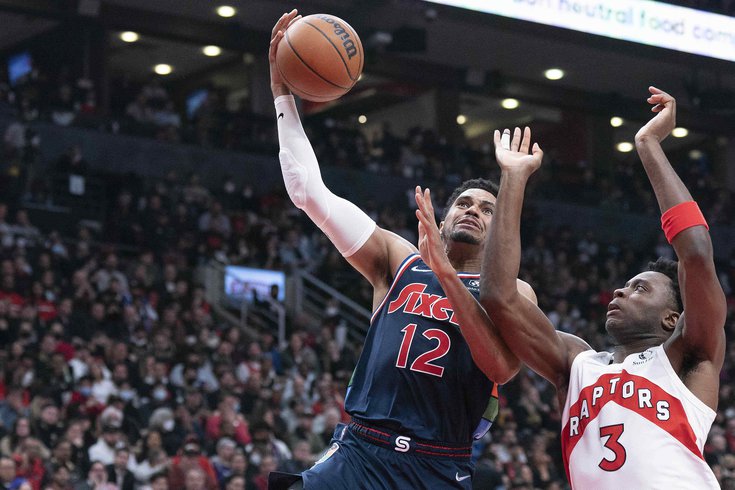 Tobias Harris drives to the basket against Toronto.

Philadelphia's biggest free agency domino fell on Thursday, when James Harden made the choice to opt out of the final year of his contract. All reliable intel suggests that Harden is going to take a fairly sizable pay cut in order to help the Sixers build the best team possible, clearing the way for a more interesting summer than anyone could have anticipated.

And now there's another wrinkle — according to ESPN's Brian Windhorst, the possibility for another big move is on the table. In an appearance on Thursday morning, Windhorst brought up Tobias Harris as a name being heard around the league:

I don't think Philly will be done. We are hearing a lot about Tobias Harris in the trade market, so even after Philly looks at addressing some holes in free agency that this new contract from Harden opens, it wouldn't surprise me if they look to do more work on their roster to build more around Harden and Embiid. [ESPN]

There are some obvious disclaimers here, namely that Windhorst isn't reporting any specific trade is in the works or under evaluation. But considering Windhorst's recent track record as it pertains to the Sixers specifically, he's someone whose insight deserves to be taken seriously when it comes to the team at the moment.

As we discussed on Wednesday, moving Harris just to move him isn't strictly necessary to improve the team the way it might have seemed a couple of years ago. Miscast and underperforming in a version of the team that brought the worst out of everybody in 2019-20, Harris has since found his footing in different setups with the Sixers. He made a push for an All-Star appearance in 2020-21, and after a tough start last season, Harris found comfort in his role playing off of the Embiid/Harden combination in the middle of the floor. Harris shot 40 percent from three in the 24 games following the All-Star break, his three-point volume creeping up to a shade under four attempts per game. That number climbed to 4.75 per game in the playoffs, Harris managing a 39 percent mark from deep across 12 games in the postseason.

"This is like the first time in my career that catch and shoot was like an emphasis for me. Whereas in past years prior, it was more, I'd catch the ball, isolate, wait, hold. It was just evaluating how the be more efficient in the role," Harris said in mid-April. "That was a big emphasis from the All-Star break, was catching that ball and shooting quick. For me, that was an adjustment, but there's a lot of extra hours in the gym and hard work of adjusting to it, being able to let it fly. For me, I'm in a great rhythm, great groove right now."

Though most of the Sixers ended the season with little to celebrate on defense, Harris can lay a claim to legitimate improvement there, having guarded a range of players from DeMar DeRozan to Karl-Anthony Towns to Pascal Siakam to Jimmy Butler, with varying degrees of success against each. With fewer responsibilities to initiate on offense, Harris put that extra energy to good use on the other end, providing Philadelphia's best hope against an opponent's best players on a lot of nights.

If Harris was able to do all of that on even a semi-consistent basis for a group that looks to be on the verge of adding an impact piece or two, the amount of money owed to him over the next two seasons might not be thought about as much. But there are multiple factors to consider, from what they might be able to bring back in return for him to whether he is interested in playing the role he'll be asked to play here in the first place.

The Kings' rumored interest brings those factors into focus. Harrison Barnes is a slightly better and more willing shooter than Harris, a more consistent defender against wing-sized players, and he has been more comfortable in a role where he is simply being asked to be in the right spot rather than having a desire to run the offense. But Barnes is also a less versatile offensive player, one whose success depends more on the people setting him up. Do you gain more from having a hand-in-glove fit with less offensive utility, or a player with slightly more offensive versatility but less comfort in the role you want him to play? The answer probably changes based on the game, the opponent, and the lineup around them, with each having pros and cons situationally.

The order of operations for Philadelphia's hiring process has led to a lot of discussions about the relationship between Doc Rivers and Daryl Morey, noting the unusual situation of a coach being hired before the high-powered exec. Comparatively, little time has been spent on the idea that he inherited Harris at his current price point, and deciding who to give major money to and when is basically the No. 1 job of any NBA executive. There may not be an executive in the league who cares more about possessing top-end star power than Morey. He is the guy who has been seen around Philadelphia playing tennis with his star center and showing up on the runway to greet Harden upon his arrival, having re-secured the player who helped build his reputation.

It's not to say he dislikes Harris or doesn't value what he contributes to the team, only to suggest that Harris being the highest-paid guy on the team is something he has undoubtedly thought about. When the Sixers were engaged in a game of chicken with the Nets at the deadline, Philadelphia's willingness and ability to move on from Harris might as well have been put on a billboard. Brooklyn was told in no uncertain terms that Philadelphia would find a way to get Harden in the summer whether they dealt with them or not, and though it didn't end up being necessary, it showed the difference between being valued and being essential, with Harris falling in the former category.

None of that is to say Harris is going to be dealt this summer. Leading into and coming out of Harden's big decision, the messaging on Philadelphia's end has been fairly consistent. They're not making moves (and don't need to make moves) strictly to clear space. As a product of what looks to be a significant pay cut for Harden, the Sixers are expecting to have access to the non-taxpayer mid-level exception, the bi-annual exception, and some wiggle room for sign-and-trades without needing to simply offload parts. While there's a level of, "I'll believe it when I see it" when it comes to the math there, the willingness to take less from their star free agent would uncomplicate a lot of things for the front office.

But as with the rest of the offseason to date, exploring Harris' value is worth the effort even if it ends with Philadelphia looking at what's out there and deciding it's better to simply keep Harris in town. There are a decent amount of teams around the league who would have been happy to get De'Anthony Melton for the cost of a late first and a player who likely won't play this season, with apologies to Danny Green and his rehab optimism. The Sixers were the team that ultimately got that deal done, because Philadelphia's front office has spent the offseason searching far and wide for ways to bolster their rotation. You can't figure out what players are worth if you just sit in your home office and talk amongst yourselves about possibilities. Talking with teams about Harris or Matisse Thybulle might not lead to the Sixers acquiring another star, but it keeps the door of possibility open, and that's the gig in a nutshell.

We'll see if all of this smoke ultimately amounts to anything, but with two Harris rumors in two consecutive days in late June, expect the stove to stay hot this summer.