Contract negotiations between SEPTA and Transport Workers Union Local 234 are continuing Monday night with less than an hour to go before the midnight strike deadline set by the union.

For now, "all city bus, subway and trolley service remains on regular schedules.," SEPTA said in a statement released about 10:30 p.m. Monday night.

Local 234 has pledged to strike at 12:01 a.m. Tuesday — the minute after their current contract expires.

"SEPTA and the Transport Workers Union Local 234 continue negotiations on a new contract, with the hope of avoiding a service disruption for the thousands of riders who depend on City Transit Division services," the statement said. "Progress has been reported in the talks, and both parties have agreed to continue negotiations in an effort to reach an agreement that is fair to employees, customers and the taxpayers."

SEPTA said will immediately notify riders of any change in service status.

The union said late Monday that talks were "still going, but slow."

A strike would shut down the SEPTA's bus, subway and trolley routes throughout Philadelphia. Regional Rail service, which is operated by a separate union, would remain operational.

Late Monday afternoon, SEPTA spokeswoman Carla Showell-Lee described negotiations as progressing, but said there are still many unresolved issues. She declined to say whether an agreement was imminent, nor would she elaborate on sticking points.

"I can't say where we are right now," Showell-Lee told reporters. "We have a few hours left. The bottom line is both sides are communicating. Whenever you're talking, that's a good step in the right direction."

Local 234 represents some 5,700 SEPTA workers. A strike would affect hundreds of thousands of commuters who rely on SEPTA to transport them to work, school or elsewhere.

Showell-Lee said both Mayor Jim Kenney and Gov. Tom Wolf had spoken with negotiators, urging them to remain at the bargaining table. Showell-Lee encouraged Local 234 to working even if a contract is not reached by the strike deadline. 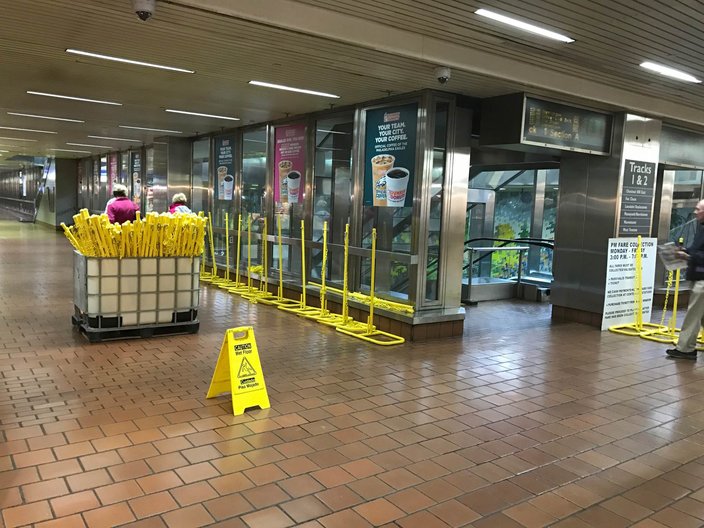 Equipment that will be used to keep commuters in line sits on the concourse at SEPTA's Jefferson Station last week. A possible strike by the union representing bus, subway and trolley workers will likely lead to overcrowding on Regional Rail, which is not affected by the strike threat. To ensure their safety and to avoid platform crowding, riders will be asked to wait in line on the concourses of its busiest stations, SEPTA said..

"Too much is at stake for either side to fail to fully engage in the negotiating process," Showell-Lee said. "SEPTA's negotiating team is committed to staying at the table to advance discussions and reach an agreement. For the sake of the thousands of riders who would be severely negatively impacted by a strike, we hope the union will do the same."

Negotiators have been working to close a divide on several issues, including contributions to pensions and health care insurance, plus work rules.

The two sides returned to the negotiating table Monday morning following a session that lasted deep into Sunday night.

It remains unclear whether Local 234 would strike if an agreement is close, but not secured, as the strike deadline passes. Local 234 officials did not return a request for comment made Monday morning.

A strike would leave hundreds of thousands of commuters scrambling to find alternative travel routes, a scenario that is likely to create significant roadway congestion throughout Center City. Transit strikes in both 2009 and 2005 did just that.

All transit service will stop at midnight, regardless of where any bus, trolley or subway is along its route. Buses will return SEPTA's depots. Showell-Lee stressed that riders should be aware of that possibility and continue checking SEPTA's website for updates.

"We ask that our riders continue making plans for travel alternatives to prepare themselves for the possibility of a significant service disruption," Showell-Lee said.

City offices and schools will remain open and operate on standard schedules, regardless of a strike. All city employees are expected to maintain their typical work hours or used accrued leave time to cover any absences. Free shuttles will transport city employees along the Broad Street and Market-Frankford lines.

School District of Philadelphia students who rely on SEPTA for transportation will receive an excused absence, but a note from a parent or guardian is necessary. Yellow bus service will continue operating its normal schedule, but some delays might occur.