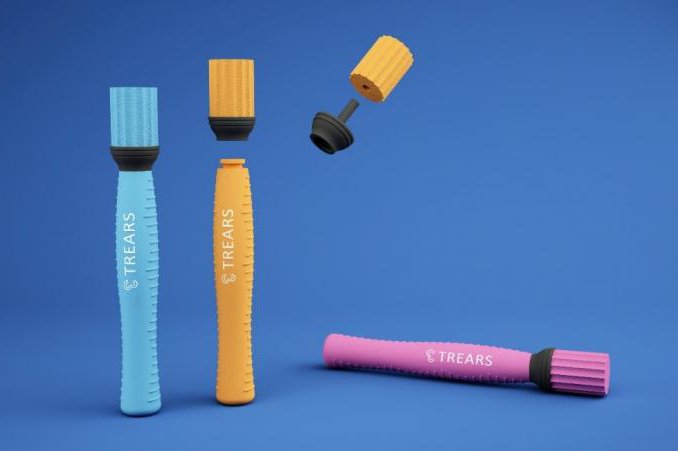 Dr. Andres Herane-Vives founded the company Trears to help bring his novel device to market. It was designed to more easily measure stress hormones in earwax.

Dr. Andres Herane-Vives of King's College London has designed a novel device that can measure cortisol levels in earwax samplings.

Cortisol, your "fight-or-flight" hormone, plays an important role in how the body reacts to stress, and is a possible biomarker for depression.

High levels of cortisol and other stress hormones are known to raise our risk of depression, anxiety and heart disease, and can cause digestive problems, headaches, memory problems and weight gain, according to the Mayo Clinic.

Cortisol levels can be difficult to measure, though.

"Cortisol sampling is notoriously difficult, as levels of the hormone can fluctuate, so a sample might not be an accurate reflection of a person's chronic cortisol levels. Moreover, sampling methods themselves can induce stress and influence the results," said Dr. Herane-Vives, who is also an honorary staff member of the Institute of Cognitive Neuroscience at the University College London.

Cortisol levels are most commonly measured with hair samples, but there are several limitations to this method.

Unfortunately, the hormone levels in hair tend to fluctuate and some people don't have enough hair for a reliable sample, he explained. Cortisol levels in earwax, however, appear to be more stable.

The new device also makes it easier to acquire a sample because it can be administered easily at home without the need of medical supervision.

It is designed to work like a cotton swab, but with a built-in brake that keeps the swab from being inserted too deeply into the ear causing damage, he said.

Dr. Herane-Vives drew inspiration for his device from the natural properties of bees' honeycomb. Like honeycomb, earwax is resistant to bacterial contamination, reducing the risk for potential contamination during shipment to a laboratory for testing.

The effectiveness of the device was recently tested in a study published in the journal Heliyon. For the pilot study, he led a team of researchers from the UK, Chile and Germany. The team tested different cortisol sampling techniques on 37 study participants.

First, they used a standard syringe procedure to collect earwax, which can be a painful experience. Then a month later, they used the same technique on one ear and the novel device on the other. The participants were able to administer the novel device themselves.

The researchers also took hair and blood samples from all of the participants.

Overall, earwax samples yielded more cortisol than the hair samples. And Herane-Vives' device was found to be the fastest and possibly cheapest method.

In another recent study, the novel device was rated by participants as a more comfortable alternative to traditional techniques.

Dr. Herane-Vives founded the company Trears to help bring his device to market with the help of the UCL Hatchery startup incubator.

The device also has the potential to measure glucose or COVID-19 antibodies, he said.