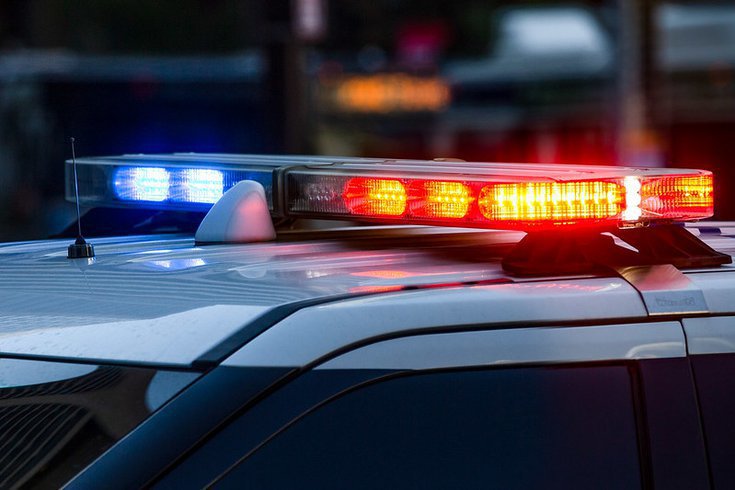 Edward Cagney Mathews will be detained until his harassment trial begins, a New Jersey judge ordered Wednesday. Above, Mount Laurel police stand outside Cagney's home on July 5 after protesters gathered in response to his racist rant against a Black neighbor.

The risk of Edward Cagney Mathews missing his court date was too high to allow his release, Cook said, citing 11 missed court dates on his record. Cook also factored Mathews' 20 prior convictions, including an obstruction of justice conviction, WHYY reported.

Mathews' attorney, Anthony Rizzo, pushed for his release on the condition that Mathews not enter the Essex Place condominium development where he lives.

The video was posted on Facebook two days later and went viral, getting nearly 300,000 views and causing an uproar in the community.

Mathews initially was charged with harassment and biased intimidation and allowed to return to his home. Hundreds of people protested outside of his home on July 5. He eventually was taken into custody after additional charges were filed.

On Wednesday, Burlington County Assistant Prosecutor Jamie Hutchinson said residents have accused Mathews of smearing feces, breaking car windows and sending threatening notes wrapped around rocks, according to WHYY. The FBI verified the writing on one of the notes as Mathews', Hutchinson said.

Mathew's attorney denied those claims, citing a lack of evidence.

The July 2 incident began when Mathews allegedly tried to break into the home of LeRon Brown, president of the homeowners' association. Tambe stepped in to diffuse the situation, and Mathews targeted his anger toward him, police said.

The video shows Mathews directing a string of racial slurs and threats at Tambe. It also shows him chest-bumping, spitting at and trying to lick Tambe, a 25-year-old senior airman in the U.S. Air Force.

Mathews also boasted to Tambe that he ran HOA board members and Black residents out of the neighborhood, claiming the Mount Laurel Police couldn't do anything about it, NBC10 reported. A police officer showed up near the end of the incident and ordered Mathews to go home.

Mathews has been in custody since his July 5 arrest. The charges against him include fourth-degree harassment, bias crime with purpose to intimidate, harassment and trespassing.

Mathews later apologized for his actions and said he was drunk at the time.

"I did not mean this," Mathews told NBC10. "It was a lapse of judgment at a moment at my weakest point and my anger got the best of me."

Mathews has seven days to appeal the Cook's decision. His next court date is Aug. 25.

Police are asking anyone with information on Mathews to contact them at tips@mountlaurelpd.org or (856) 234-1414, extension 1599. The Burlington County Prosecutor's Office can be reached at tips@co.burlington.nj.us.