Restrictions implemented to stop spread of the virus and declining birth rates could be some potential causes, experts say 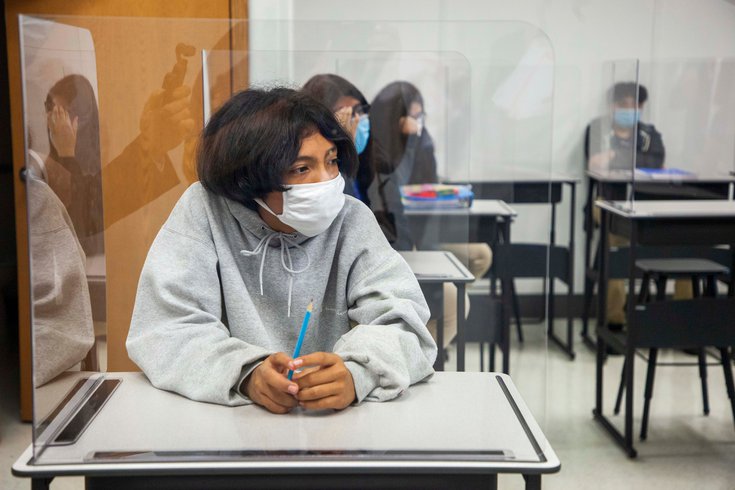 Between October 2019 and October 2021, enrollment in New Jersey public schools declined by more than 18,000 students. In the photo above, Lakewood Middle School students wear masks and sit behind polycarbonate shields on their desks on Sept. 8, 2020.

Enrollment in New Jersey's traditional public schools fell by about 18,000 in the two years since the pandemic led to school closures and other classroom disruptions, according to new enrollment data from the state's Department of Education.

The losses came in the state's urban centers and suburban districts alike. In October, Passaic reported 800 fewer students enrolled in its schools compared to two years prior. In Toms River, the loss exceeded 600. Atlantic City's enrollment declined by more than 400, as it did in the South Orange-Maplewood district. Edgewater's enrollment slumped by nearly 300 students, 30% of its 2019 school population.

The figures mirror a national trend, with public school enrollment plunging by at least 1.2 million nationwide during the pandemic, according to an enrollment tracker from conservative think tank American Enterprise Institute. Though the Garden State's public school losses are not as dramatic as those in other states — New York City public school enrollment dropped 5% — the two-year drop is the largest New Jersey has seen in recent memory.

Decreases are not unprecedented: From September 2016 to September 2018, enrollment in New Jersey's traditional public schools tumbled nearly 14,000. And year-over-year enrollment changes for the last decade have been negative for all but two years.

It's unclear how much COVID restrictions fueled the enrollment drop. Newark, the state's largest school district, kept its mask mandate for months after the state said districts could allow kids to go maskless and its enrollment grew in the last two years by nearly 4,000.

But critics of COVID-19 measures implemented in schools across the nation starting in early 2020 — mandatory masking, remote learning, quarantining — say those changes prompted parents to take their children out of public schools and enroll them elsewhere, or home-school them.

A spokesman for teachers union the New Jersey Education Association cautioned there could be other reasons for declining enrollment, like steadily declining birth rates seen nationwide.

The enrollment figures, though newly published by state education officials, are from reports public school districts submit to the state each October, and it's possible enrollment could have rebounded in some districts since then. Mike Kenny, the spokesman for Toms River schools, said the 14,000-student district in Ocean County has gained 200 students since October.

Kenny said it would be difficult to cite any reasons for the 2019-2021 decrease, adding it would be "unlikely" to quickly recover the 600 students lost since 2019.

"We're currently trending upward, and our enrollment/demographic data shows us leveling off to slightly increasing from our current levels over the next five years," he said.

The Department of Education has previously reported a 33,000-student drop between the 2018-19 and 2020-21 school years. Those figures were based on district enrollment reports from June of those years.

New Jersey had a total of 1,320,225 students enrolled in traditional public schools in October 2019. The state's first coronavirus case was identified in March 2020, and Gov. Phil Murphy ordered public schools to begin remote learning that month.

The drop in enrollment at traditional public schools came as charter schools saw enrollment rise almost 6%, from 55,604 in October 2019 to 58,777 last October.

The 800-student drop in Passaic's school district, which educates about 13,000 students in 18 schools, was the largest in the state. Three Ocean County districts — Toms River, Lakewood, and Jackson Township — lost about 600 each, with Lakewood's loss representing 11% of its 2019 enrollment. In Montclair, there were 542 fewer students starting the current school year compared to pre-pandemic numbers, an 8% drop.

Overall, enrollment at New Jersey's traditional public schools dropped 1.4% over the last two years. The decrease from the prior two-year period was 0.02%.

A state Department of Education spokesman said he could not speculate on what drove the drop.

"I think it's hard that the districts were in a difficult spot last year, attempting to make the best of a very tricky situation in terms of prioritizing student health and safety with in-person learning," Farrie said.

With fewer COVID restrictions this year, she added, "some of those fears will wash away and hopefully we start to see enrollments rebound."

"I don't think the lesson there is 'people hate masks, and therefore they won't be coming back to school,'" he said. "But I do think that masks are indicative of greater changes to the school day, a longer, more permanent deviation from normalcy, and that I do think is at the root of these enrollment declines."

Steve Baker, the New Jersey Education Association spokesman, said declining birth rates could also explain why enrollment in New Jersey public schools fell, and he bristled at the notion that enrollment drops mean parents have pulled their children out of public schools.

"It seems like a pretty politically convenient interpretation that might be ignoring a much more obvious underlying cause," he said. "What if there are just fewer school-aged kids each year?"

Brooke Rigilano and her husband removed their five children from Runnemede public schools last year over pandemic rules and disruptions. Rigilano said she did not like the masks, contact tracing, and quarantine rules, but continued remote learning became an issue too. The children are all homeschooled now.

"We never thought about homeschooling prior to the pandemic. And when we started homeschooling, we thought: 'When everything settles down and goes back to normal, we can send them back,'" she said. "But everything is not going back to normal. Schools have adjusted everything. Because of the lack of learning during the pandemic, everyone's behind. Instead of helping the kids catch up, I feel like they're lowering the standards."