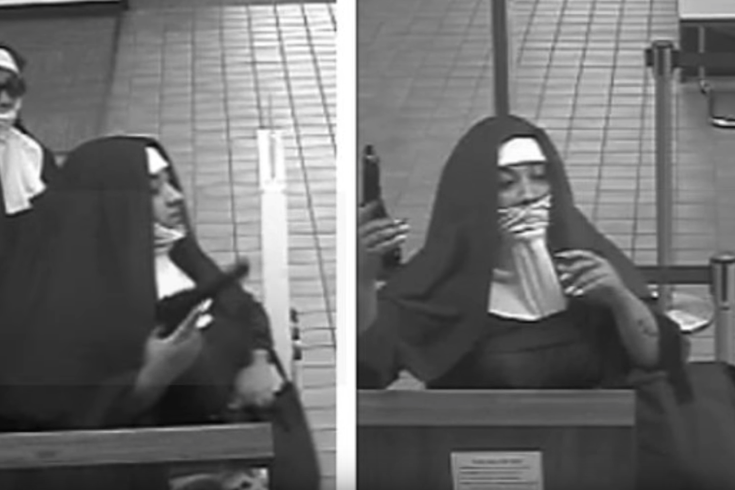 Footage from the first attempted robbery by the duo.

A New Jersey woman was sentenced to 37 months in prison for her involvement in a monthlong crime spree across New Jersey and Pennsylvania in late 2017 where she and another woman were dressed as nuns.

Melisa Aquino Arias, 24, of Passaic received her sentence Wednesday after pleading guilty in June to robbing a bank in Garfield, New Jersey, last September, according to the Associated Press.

The second woman in the heists, Swahilys Pedraza-Rodriguez, 20, of New Haven Connecticut, pleaded guilty and received the same sentence.

Arias also pleaded guilty to conspiring to steal money from an ATM in Scotrun, Pennsylvania, and the women were suspected in an attempted robbery of a bank in Tannersville, Pennsylvania, last August.

The Twitter account for the Philadelphia FBI posted images of the two dressed in nun's habits after the attempted Tannersville robbery:

The two women were arrested in mid-October at a bank in Teaneck, New Jersey, after asking an employee about opening an account. The employee recognized the women and alerted police; they were caught shortly after fleeing the bank.