New 'Made in Chinatown' mob movie is filming in Philly 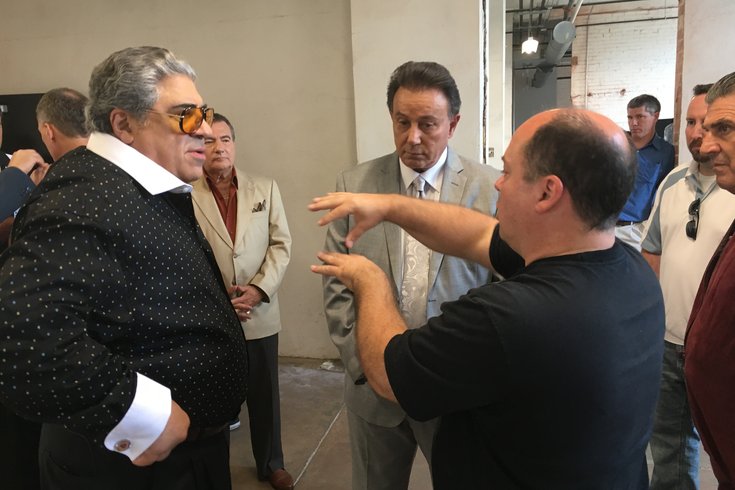 Executive producer Mark V. Wiley talks to Vincent Pastore, Tony Darrow and other cast members on the set of "Made in Chinatown"

Mark V. Wiley, the writer and executive producer of the movie “Made in Chinatown,” traces the project’s genesis back to 1999. Wiley, who has studied the martial arts and written several books about it, was in New York and noticed the manifold cultural differences between the adjoining Manhattan neighborhoods of Chinatown and Little Italy. At one point, the idea occurred to him: “What if a Chinese guy wanted to join the Mafia?"

That's the premise of "Made in Chinatown," a gangster comedy film that's shooting in Philadelphia this month – in Chinatown, South Philly, and various other neighborhoods. PhillyVoice visited the set of “Made in Chinatown” this week, as they shot interior scenes in a multipurpose building in the city’s Callowhill section. We talked to the cast and crew about the film, their goals for it, and what it’s like to shoot a culture-clash gangster comedy here in town.

Wiley wrote the script several years ago, and finally got the funding for the film to go before the cameras this summer. The filmmakers are eying a 2019 release for the project, whose multicultural flavor extends to the cast. The protagonist is Vinny Chow (Jay Kwon) and the cast includes Hong Kong legend Lo Meng (as Triad boss Hung Phat) and the noted martial arts actor James Lew, who doubles on the film as action coordinator.

But also on board are several veterans of “The Sopranos,” including Tony “Paulie Walnuts” Sirico, Vincent “Big Pussy” Pastore, Tony “Larry Boy" Barese Darrow, and Tony Ray Rossi, who played the informant Tony Soprano choked to death in one famous first-season episode.

According to Bobby Samuels, one of the film’s two co-directors (along with Art Camacho) and a Philly native, the film “deals with Chinatown in New York: Italians on one side, Chinese on the other.”

“Basically, it’s a story about an Asian kid who wants to join the mob,” Samuels told PhillyVoice.

While the film is set in New York, the filmmakers opted for using Philadelphia’s Chinatown to stand in, while also filming in South Philly and in some of the other “Italian parts of the city.”

“We wanted to keep it real, so we brought in some Hong Kong guys,” he said.

As for the Mafia side of the film, it was perhaps not surprising that the cast is full of “Sopranos” alums.

The plot of the film has several characters played by men who long portrayed members of Tony Soprano’s entourage vying, at last, to be the boss themselves. Brooklyn mob head Amadore Condimento (Pastore) and Little Italy chieftain Al Capella (Darrow) are fighting for control of New York’s crime rackets, while Vincenzo Cento (Sirico) is the Sicilian "boss of bosses," who arrives to mediate the dispute. 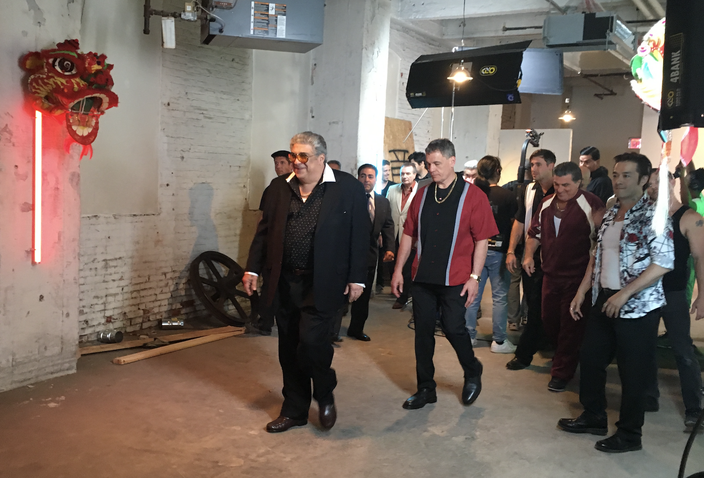 The young Vinny Chow throws a wrench in things when he joins the La Cosa Nostra. Why take such an unusual step? According to writer/producer Wiley, Vinny wants to date an Italian girl who only goes out with made guys.


In “Made in Chinatown,” Pastore and Darrow are again mobsters in the same family, but this time, they don’t quite see eye-to-eye. In the scene shot when PhillyVoice was on set, they’re part of a group of mobsters seen walking towards the camera "Reservoir Dogs"-style, although they end up in an argument with one another.

Pastore was part of one of "The Sopranos’" most memorable arcs, when he wore a wire against Tony and spent a season feeling highly conflicted about it. In “Made in Chinatown,” Pastore returns to the Mafia genre, although this time, he’s based on the other side of Manhattan.

“I got bumped up,” Pastore said of his character in the film.

“I’m the boss of Brooklyn. I run Brooklyn,” he said.

“I got my guys under me – Soda Fountain Eddie, Luigi, and Vito – they’re my crew.”

Basically, it’s a story about an Asian kid who wants to join the mob."

He also assured us that his character in this film, unlike "Big Pussy," won’t be wearing a wire.

The New York native added that he’s always enjoyed coming to Philadelphia. “A lot of 'Soprano' fans in Philly,” he said.

While "Big Pussy" was famously whacked at the end of the second season of "The Sopranos," "Larry Boy" Barese lasted much longer on the show, actually making it to end of the series’ run alive, albeit in jail. Darrow has been in more than 50 films and is one of the few actors to appear on both "The Sopranos" and Martin Scorsese’s “Goodfellas,” but prior to that, he had a successful career as a crooner.

“Before I became an actor, I used to perform at the Latin Casino in Cherry Hill,” Darrow said on the set, referring to the Vegas-style showroom that was a leading area venue in the 1970s. He also favors the Kitchen Consigliere restaurant in Collingswood, N.J.

As for his "Sopranos" experience, Darrow remains proud.

“We all won a [Screen Actors Guild] award for it, as an ensemble, and I mean, how much better can you get than that? I don’t think there’ll ever be another series like that, ever," he said.

Of “Made in Chinatown,” Darrow emphasized the cross-cultural aspect.

“The Chinese factor is sensational,” he said.

“These are all great martial arts guys who know what they’re doing – and then they brought us in. But what I like about it, it’s not just a shoot-em-up killing kind of a movie. It’s more of a comedy – more of a spoof.”

“It’s a fun comedy, with no overt violence,” Samuels said, anticipating it will be rated PG-13.

After “Glass” and “Creed 2” filmed in town earlier this year, “Made in Chinatown” keeps the run going of film productions lensing in Philadelphia, after somewhat of a lull prior to that. And even though the film is set in another city, it was important for both the writer and the co-director to produce the film locally.