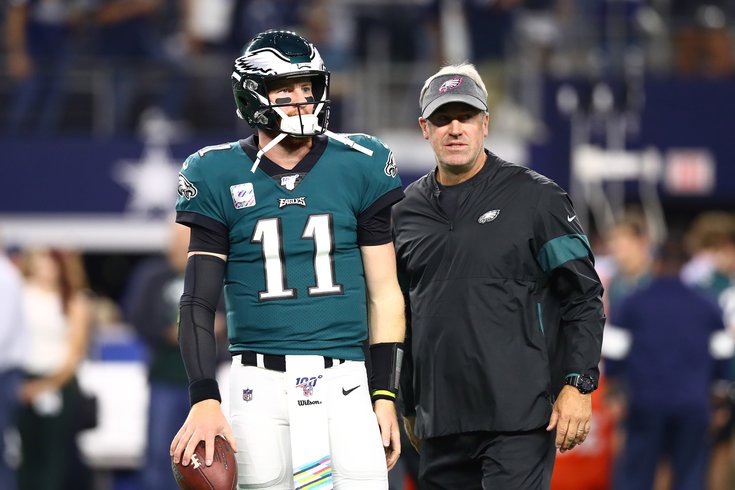 Here's another new feature that will be running this NFL season, looking around the NFC East at the Eagles' divisional rivals. Though there are no 2022 games to go off just right yet, I anticipate there will be a lot of nonsense going on in the most chaotic division in the sport (more so for off-the-field rather than on-the-field reasons).

I'll preview the division's games, look at a couple of storylines and provide some news updates.

Not to just totally be a Philly guy, but I'm taking the Eagles, Jaguars, Titans and Buccaneers straight up. That won't always be the case every week this season. Yes, the Commanders and Giants will likely be bad, but I did predict Dallas to make the postseason as a Wild Card team. The Cowboys, however, are dealing with a potential Tom Brady Revenge Tour and a lingering Dak Prescott injury (more on that in a sec) at the moment.

• It's a shame that the Eagles game is at the same time as the Commanders-Jags game. That truly might be my most anticipated non-Birds game of the entire season. Two former kings of Philly in Jaguars head coach Doug Pederson and Commanders starting quarterback Carson Wentz will square off for the first time ever. Obviously, Pederson and Wentz were electric together in 2017 and then the whole dynamic collapsed midway through the 2020 season.

Wentz should absolutely credit Pederson for some of his early career highs, but I can't imagine he loves the guy who benched him for Jalen Hurts in Green Bay in December 2020. That relationship was as strained as anything by the time Pederson was canned following that disastrous season. Wentz was traded to the Colts two months later. The Wentz era in Indianapolis crashed and burned while Pederson took 2021 off from coaching. Now they're facing each other as they attempt to resurrect their respective careers.

Pederson is now tasked with molding 2021 first-overall pick Trevor Lawrence into a franchise QB in Jacksonville, much like he was when he was brought to Philly in 2016 to help Wentz blossom. Wentz is now captaining the most disastrous organization in North American professional sports. I don't know if this game will be good, bad or some complete weird mix of the two. I do, however, know the takes after the game will be fire.

Imagine telling an Eagles fan before Carson Wentz's first start of the 2018 season that in four years' time, he would be in Washington and Pederson would be in Jacksonville. I'm writing about it clearly, but I still feel like it's not being discussed enough!

• Will the Cowboys continuously feed Ezekiel Elliott even with a very good QB in Prescott (if healthy) and perhaps an even better running back in Tony Pollard on the roster? Eagles fans certainly hope so.

• I've written this a couple of times, but I do love the Brian Daboll hire for the Giants. Going into the 2021 offseason with an opening at head coach, I wanted to see the Eagles pursue Daboll. Daboll, however, remained the Bills' offensive coordinator for another season, finally leaving for a head coaching job this past January. They nailed two first-round picks in Kayvon Thibodeaux and Evan Neal. The vibes still remain in shambles with Daniel "Danny Pennies" Jones at QB though.

Dak Prescott didn’t finish practice and will be listed as such on the practice report because of an ankle issue. The QB insisted he’s fine, not injured and will play without limitation. He blamed the problem on wearing new shoes. Same ankle as injured in 2020. pic.twitter.com/phrNZVlp9e

"My 'I'm fine' statement is raising a lot of questions already answered by my statement."

As ESPN's Ed Werder notes, this is the same ankle that Prescott fractured and dislocated in the 2020 season, causing him to play in only five games that year. Casually saying something like this just a couple of days before the Week 1 kickoff is raising all sorts of red flags for me.

• Russell Wilson... almost a Commander or a Giant? In a new report from ESPN's Brady Anderson about the Broncos acquiring Wilson this offseason, the writer mentions that both Washington and New York were calling Seattle about a potential Wilson deal:

The Seahawks received calls from the Broncos and several other teams, including the Saints, New York Giants and Washington Commanders. They knew Wilson wanted Denver, according to a front-office source, but kept New Orleans involved in the bidding so the Broncos would have to compete against another offer. [ESPN]

The Eagles lucked out big time that Wilson didn't land in their division, which is just crappy enough to keep them in playoff contention late into almost every season.