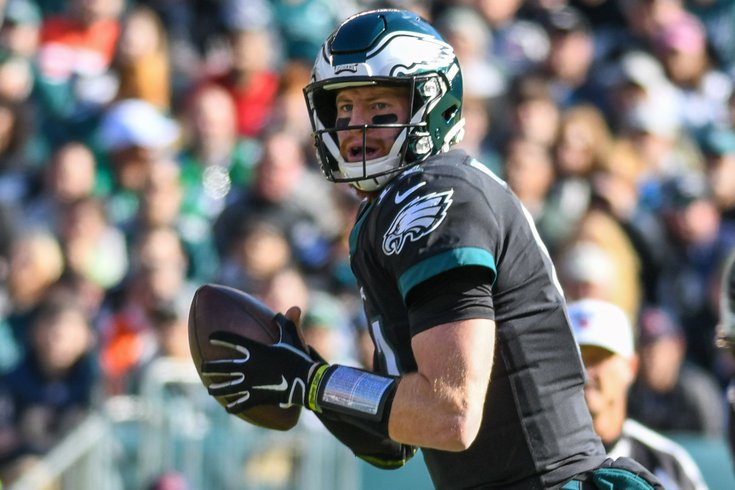 UPDATE [11:48 a.m.] — Almost as soon as I hit publish on this, the Eagles traded Carson Wentz to the Colts for a 2021 third-round pick and a conditional second-round pick in 2022, according to Adam Schefter.

Philadelphia has agreed to trade Carson Wentz to the Indianapolis Colts in exchange for a 2021 third-round pick and a conditional 2022 second-round pick that could turn into a first, league sources tell @mortreport and me.

Here's how that conditional pick can convert...

The conditional second-rounder in 2022 becomes a first-rounder if Wentz plays 75 percent of the snaps or 70 percent and the team makes the playoffs. https://t.co/quAYwcz7bd

So, it turns out the Colts' offer wasn't as good as had been previously reported. More coming soon...

The Carson Wentz trade drama is nearing the end of another week without a resolution, and at this point there have been so many reports that our heads are spinning. In fact, just recapping them here would be an entire story on its own, so we'll dive right into the latest.

[But first, a note to our readers: Why do we keep writing about all these reports when none have been right yet? Well, for a couple reasons. For starters, they do better than almost anything else we write, so there's clearly an interest from our readers. Second, one of these reports is eventually going to be right, and we want to make sure we have that covered. And finally, we try to do as good a job as we can framing these rumors and putting them into context that can inform the readers, beyond just the cursory "some guy said this." So if you're mad that you're getting another dose of Wentz rumors on this snowy Thursday, we apologize. But it's the biggest sports story in the city at the moment, so we're going to cover the hell out of it. OK, back to Wentz...]

On Wednesday, a day after Sports Illustrated's Albert Breer said the Bears were the frontrunners to land the Eagles QB, Les Bowen of the Philadelphia Inquirer reported that the Eagles, with Wentz seemingly not wanting to be dealt to Chicago, would likely be forced take the best offer from the Colts, and then would draft a quarterback with the sixth overall pick.

Spoke with NFL management source (not from Eagles) about the Wentz melodrama. His viewpoint: If Wentz doesn’t want the Bears, Bears aren’t gonna trade for him. Eventually the Eagles take whatever Indy is offering, maybe a second plus something. Also, Eagles draft a QB 6th overall

We wrote yesterday about the last line of that tweet, specifically why drafting a quarterback with the sixth pick would be a mistake. But now let's examine the rest of Bowen's report, which he elaborated on in a longer story for Inquirer.com. And, just a warning, it ain't great for the Eagles...

But an NFL management source with experience in such negotiations said he thinks the Bears are unlikely to trade for Wentz unless he is fully onboard; the source said he thinks it is more likely the Eagles will end up having to take whatever Indianapolis is offering, before the March 19 deadline that requires a $10 million Wentz bonus payment, because that is where Wentz wants to go.

“In the end, Indy will probably get [Wentz] for below market value, because it seems like he only wants to play in Indy,” the source said. “This desire to only play in Indy has scared other teams off. ... The Eagles will end up trading him and drafting a quarterback.”  [inquirer.com]

That middle paragraph in there is the most important. And the scariest for Eagles fans.

As recently as last week, there were reports that Howie Roseman was looking for, and very well could receive, at least a first-round pick for Wentz, plus some more. Now, it's looking more and more like that was never actually an option and was likely a trumped-up narrative being championed by Roseman himself in an effort to create a bidding war.

We're beginning to see why he was doing that.

Between the report that Wentz only wants to go to the Colts and this one from Bowen saying that the Colts' offer is much less than Roseman is looking for, whatever bidding war Roseman was hoping to incite never really materialized. Worse than that, if this source is to be believed, the Colts' offer isn't just worse than what Roseman thinks is fair, it's considerably worse — and it's worse than the previously reported offer of two second-round picks.

It appears the narrative here has flipped, as has the power in the negotiations.

At first, it seemed to be Roseman driving the ship, with reports looking like the Eagles were going to get a steal for Wentz and a deal was close to being finalized. But as the days wore on, it became clearer and clearer that the offers being reported weren't real — otherwise, a trade would have been finalized.

Now, we're likely hearing the other side of things, with these leaks possibly coming from the Colts in an effort to drive down Roseman's demands (or from Wentz's side in an effort to try to force his way to Indy and avoid a trade to the Bears).

Whether or not you think this latest deal is worth it for a QB who finished last season as one of the worst in the NFL, there is one thing that seems clear: these negotiations are starting to get away from Roseman. And if he doesn't act soon — especially before the Bears find a QB elsewhere and there's really only one interested party — he risks losing any kind of leverage.

According to The Athletic's Zak Keefer, the Colts and Eagles have been in discussions this whole time, but Indianapolis GM Chris Ballard reportedly hasn't increased his offer much from where it started when negotiations began.

While it's been quiet, Eagles and Colts have continued trade talks for Carson Wentz. One important aspect of this, I'm told, is Indy hasn't significantly changed its offer from where it started more than a week ago. For the most part, Colts aren't budging.

Clearly, they can see that the Eagles are desperate, and with that $10 million roster bonus looming in just about a month, they know Roseman and Co. can't keep this dance going forever. That, combined with Wentz's desire to play there (and not Chicago) is likely the biggest reason the Colts haven't budged from their initial offer — and why, according to Bowen, they believe "probably don’t need to do so."