For Flyers, a lot more changes are ahead as team pushes to 'win now' 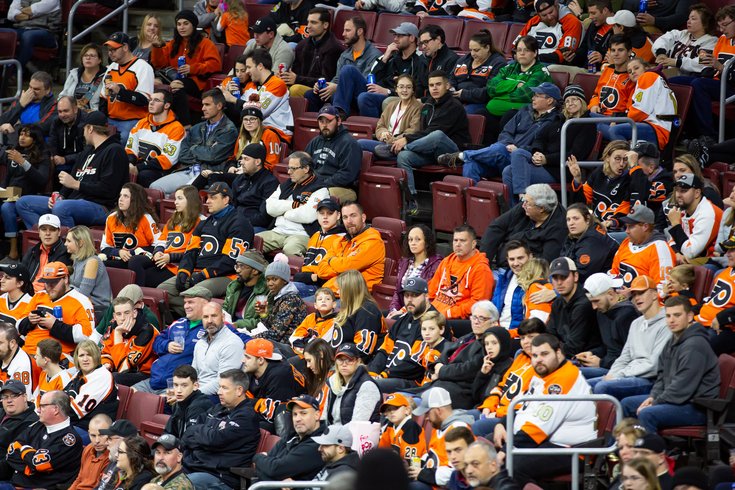 Philadelphia Flyers fans during a game against the Arizona Coyotes at the Wells Fargo Center in South Philadelphia.

Why did the Flyers fire Ron Hextall as their GM?

Answers came Tuesday in a joint press conference with President Paul Holmgren and Comcast Spectacor CEO Dave Scott, but only if you venture to read between the lines.

The general theme of the presser was that the Flyers wanted to win now, not years from now, and they had grown impatient with Hextall's slow, deliberate and futuristic mentality.

"The bottom line is we thought we needed to make more progress," Scott said. "For me, it boiled down to one question: did I think we could do better as a team now, not two years form now, but now, and the answer to that question was yes."

The farm system is a bright spot, but for whatever reason, the core pieces that have been the meat of the Flyers roster for years now are not winning enough games, and have not competed for a Stanley Cup, really, for nearly a decade.

"We had 98 points last year," Holgren said. "We were a playoff team, we got beat in a good series against Pittsburgh in six games, we thought the next step was to get better. We are a quarter of the way into the season and where we are as compared to the last five [first] quarters under Ron we are kind of the same.

Philadelphia is 10-11-2, and on pace for around 90 points — which would likely leave them out of the playoff picture.

Here's how the Flyers have performed during Hextall's tenure. You can see, there has been little improvement:

There hasn't been improvement. A lot of parties can be held responsible for that, including the leaders on the ice and the coaching staff. The release of Hextall seems justified from that standpoint. However, in the press statement issued on Monday, the Flyers said they let Hextall go because he did not share the same philosophy the organization wished to hold going forward.

When pressed by reporters to explain that difference, or what the team calls its philosophy right now, Holmgren had trouble coming up with a cohesive response.

"Without being specific, " Holgren said, "when I say Ron — and give him credit he was unyielding in his approach — are there things he could have done, I don't know, to make them better? I don't know that. But I think he had his plans and he was sticking to them. You can slice and dice that anyway you want. There are some things I am not going to disclose because its proprietary information and I'll leave it at that."

Did they disagree about Dave Hakstol as head coach? Did they disagree on the development of Carter Hart? Were there trades left on the table? We'll likely never know — but there was some catalyst for this. Clearly the Flyers knew Hextall was planning to play a long game, but for whatever reason, the last straw came this week.

"The players know, the coaches know, we all know it's about winning and we haven't been winning enough games," Holmgren said.

Hakstol, by the way, was said to be safe several times during the press conference.

"My feeling right now is under the circumstances with the injuries, particularly to our goaltenders, you can question it if you want, but I think the coaching staff has done a decent job in the situation that they're in."

A change has been made. But Holgren and Scott seemed to emphasize how much they like having their core — Claude Giroux, Wayne Simmons, Jake Voracek, Sean Couturier and others — in addition to their depth and youth. So what will a new GM be tasked with doing exactly?

"You have to look at everything," Scott said, "and we are very focused on the trade deadline on February 25. There could be a lot of opportunities out there and frankly we don't want to miss out."

Flyers fans, whether they supported Hextall or not, should be happy in hearing what they heard Tuesday. The Flyers front office is fed up (a big dip in attendance and interest can do that) and wants to win, and win now.

What this team will look like on February 26 is anyone's guess, but it could be a completely different world in Flyers land. Be prepared.

"I have no worry," Holmgren said when asked about the loss of fan support. "Flyers fans will be there when it counts."