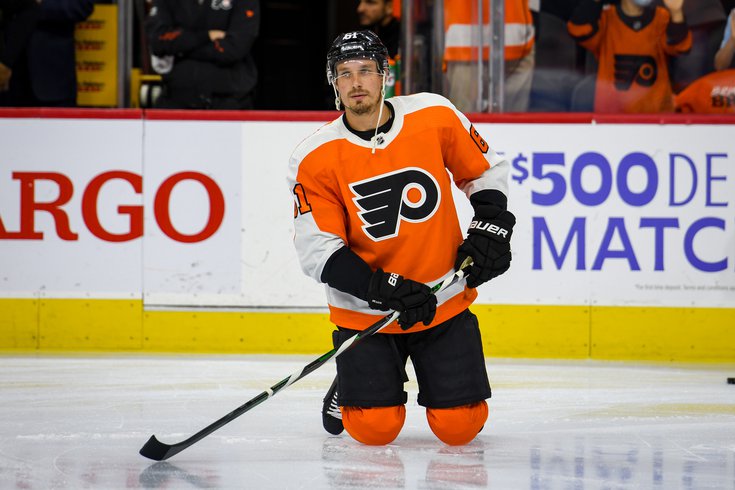 Veteran defenseman Justin Braun is reportedly returning to the Flyers.

UPDATE [5:17 p.m.] — The Flyers seemed to have snuck one more deal in before the 3 p.m. ET deadline, sending forward Derick Brassard to Edmonton, according to The Athletic's Charlie O'Connor.

Can confirm Derick Brassard has been traded to Edmonton. Not sure on return yet.

Can report the return for Brassard is a 4th round pick in 2023.

Brassard will likely be a depth forward and veteran presence for the Oilers, who as of Monday hold third place in the Pacific Division. He brings a wealth of playoff experience, having been to the Stanley Cup Final with the Rangers in 2014 and the Eastern Conference Final several other times – Rangers in 2015, the Ottawa Senators in 2017, and the New York Islanders in 2020.

Brassard has six goals and 10 assists in 31 games played this season, but a nagging hip injury has pulled him in and out of the lineup several times. He returned for good on Feb. 26 and played every game up to Sunday's 2-1 win over the Isles, where he centered a line with Cam Atkinson and James van Riemsdyk.

UPDATE [12:50 p.m.] — Justin Braun has been dealt to the New York Rangers, per TSN and The Athletic's Pierre LeBrun.

The Flyers are getting a 2023 third-round draft pick in return and won't retain any salary on the 35-year old defenseman's expiring contract. Braun carries a cap hit of $1.8 million.

Pending the official trade call, but Rangers get Justin Braun from the Flyers in exchange for a 3rd RD pick in '23.
No salary retention.

The Flyers held Braun out of the lineup for Sunday's game against the Islanders. It was plain to see why.

"There’s been a lot of teams calling on Justin," general manager Chuck Fletcher said before the Flyers' 2-1 win. "We’ll see what that means over the next day, whether we move him or not. He plays really hard. He’s a guy who blocks shots and takes hits. I just thought it would be prudent to at least resolve this over the next 24 hours and just hold him out for today."

Turns out it means the veteran blue-liner leaving Broad Street for Broadway.

He's spent the past three seasons with the Flyers, and has been a relatively reliable middle-bottom pairing defenseman, even with the way this season has gone.

The Rangers are second in the Metro Division at 40-18-5 (85 points), and Braun figures to give them another steady option behind Adam Fox, Ryan Lindgren, K'Andre Miller, and Jacob Trouba.

The Flyers now have three third-rounders in the 2023 draft between their own, the Giroux trade, and now Monday's trade for Braun. They have no '23 second-rounder right now because of last summer's trade for Ristolainen.

The end off the Claude Giroux era has brought with it five points over Philly's last four games — and it has the lowly rebuilding Flyers with the sixth best NHL draft lottery odds.

There is no reason for the Flyers to be trying to win at this point in the season, with just 20 wins to 31 losses and 11 more setbacks on overtime. Giroux was the first domino to fall, but with the NHL's trade deadline set to pass Monday afternoon at 3 p.m., Chuck Fletcher and company would be silly not to field calls to try and get younger and flush with assets while he still can.

Philadelphia already extended an expiring contract in D-man Rasmus Ristolainen last week, a signal that they aren't quite willing to sell the farm. With some (unfounded?) optimism that they may return to contention next season, who might they be willing to trade on Monday?

Defenseman Justin Braun seems likely to be moved (he was held out of the lineup Sunday), but it might be some of the younger guys who net the biggest return. For better or for worse, the front office seems to be hesitant to move them right now. Here's SportsNet's Jeff Marek with more on that potential:

“Speaking of the Philadelphia Flyers, the Giroux news is the big one of the day, and there has been interest in other players for Chuck Fletcher’s team. We think about a couple defensemen, specifically Travis Sanheim, we think of Ivan Provorov as well. Travis Konecny. I don’t get the sense that the Philadelphia Flyers are in any hurry to make decisions on these players. I mean a big offer can blow a general manager away but it sounds like all these will be very much summer decisions for the Flyers.” [SportsNet]

Clearly, there is a lot up in the air. For the sake of interested and loyal Flyers fans, let's hope Monday's trade deadline helps to provide a little more insight as to just exactly what the future of this hockey team is.

"It’s really the time of the year when you look at your unrestricted free agents when you’re out of it and you try to get as many young assets as you can," Fletcher told the media this weekend. "I’ve talked to a lot of teams about hockey trades and things like that. Typically, teams aren’t looking to pull a good player off their team to get a good player. They want to give you picks and prospects to get more players, so they can win a Cup. Certainly we will do what we can at the deadline."

As we wait for news to break, follow along right here with our open thread and live stream with all the latest rumors, takes and updates just below throughout the day: