NHL trade rumors: Are Flyers too cash-strapped to make a deadline deal? 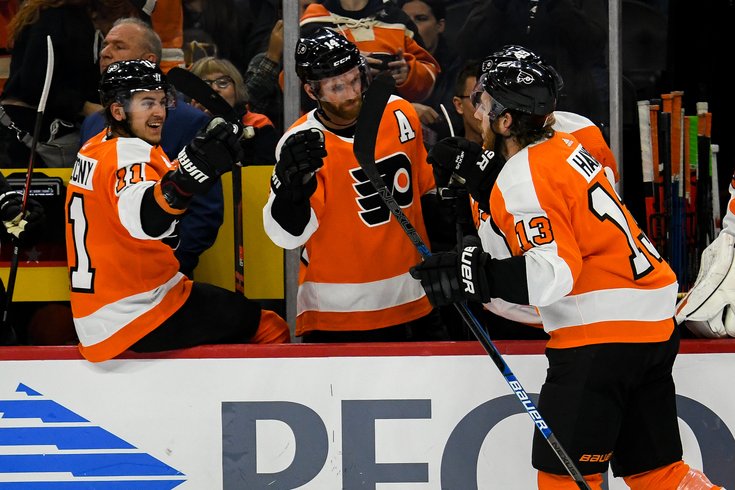 Kevin Hayes high-fiving teammates while celebrating his goal during the Philadelphia Flyers game against the Vegas Golden Knights at the Wells Fargo Center in Philadelphia on October 21, 2019. (Kate Frese)

Flyers fans are used to seeing their team half pregnant around this time of year.

Never the worst in the league, but also far from the best, Philly's beloved hockey team is usually just on the cusp of making a push for the playoffs at deadline time. Rarely have they been clear contenders — at least in recent years.

But after a pair of impressive back-to-back wins over the Blue Jackets to sweep the season series, the Flyers have 75 points and look to be firmly in the Metropolitan Division's playoff picture, with their eyes on the Capitals (80 points) and Penguins (80 points) for the top of the division.

The NHL trade deadline is Monday. They have never been more primed to make a push.

Unfortunately, as Section 215's Kevin Lagowski will explain below, GM Chuck Fletcher will need to get creative. Currently, the Flyers have just around $1.2 million in cap space, which means it'll cost Philly a little more than most teams to acquire game-changing talent on the cheap.

The most likely way that anything is going to get done is for the Flyers to convince a trade partner to eat some of their outgoing player’s salary. And you can do that by making them an offer they can’t refuse.

Whether it be picks or prospects, there’s not much that should be off the table for the Flyers at this deadline. Joel Farabee has now established himself as a part of the big club, and so he can no longer be considered a prospect. He’s not going anywhere. Nor should Morgan Frost or Cam York. Other than that, though, all bets could be off. Nay, they SHOULD be off if the right deal comes along.

There have been multiple trades in the NHL this week as teams are getting a jump on the deadline and squeezing a few extra games out of their new acquisitions. It’s a strategy I advocated over a week ago when discussing why the Flyers should pursue Chris Kreider.

And though Kreider (and some other interesting players) remain available, the price now seems like it will go sky high. Look no further than the returns that teams have been getting this week. High draft picks are flowing. Kreider and others will not come cheap. [Section 215]

If they want to bring in someone like Kreider, they'll need to wave goodbye to someone important. There could be a little pain, as the Flyers are quite high on their current crop of prospects. But that's what contending is about.

Which is why former star winger Jeff Carter is once again the subject of trade rumors in Philadelphia. The Flyers can lessen the prospect price by looking to acquire older (Carter is 35) and more expensive (he has a cap hit of $5.2 million) players. It's a strategy laid out by NBC Sports' Jordan Hall.

That is most significant as it relates to the possibility of the Flyers adding Carter for their playoff push. The Flyers have just over $2 million in cap space. Even with Los Angeles retaining 50 percent of Carter's cap hit, the Flyers would have to do some juggling. And then the fact that Carter has two more years left on his deal might make things less appealing for the Flyers.

However, there are reasons why the Flyers are probably peeking in at Carter's availability. The center is a two-time Stanley Cup champion, four-time 30-plus goal-scorer and understands the pressure of playing in Philly. Returning to the city during a playoff race would only rejuvenate Carter, who could help the Flyers' depth down the middle and be a positive influence on the team's younger bottom-six forwards. Not to mention the former Flyer has 17 goals this season and is projected to finish with 24. [NBC Sports Philadelphia]

Dave Issac from the Courier Post admits it will be hard for the Flyers even if they go the route of targeting a much cheaper player.

Even Ottawa’s Jean-Gabriel Pageau, the Senators’ top center, carries a cap hit of $3.1 million so the Flyers would need Ottawa to eat some salary there. The Flyers reportedly don’t want to trade their first-round pick for Pageau as a rental, though, so that price is too rich for Fletcher’s blood at this point.

Perhaps the Flyers look at a player like Anaheim’s Derek Grant, a center who can play wing who is a pending unrestricted free agent at age 29 and has a $700,000 cap hit. He has a career-high 14 goals this season, including three on the penalty kill, and has been used heavily in defensive situations at even strength. [Courierpostonline.com]

The Flyers have the weekend to crunch the numbers, make trade offers, negotiate and make decisions as to how they can improve their hockey team heading into the stretch run. The trade deadline will pass on Monday at 3 p.m.

There seems to exist a strong possibility that they stand pat, and hope that perhaps returns of Nolan Patrick and Shayne Gostisbehere (both tuning up their games after missing time with the NHL club in Lehigh Valley) can provide a boost. As could, theoretically, turning back to a top prospect like Morgan Frost (who has 24 points in 33 games with the Phantoms).

We'll get a much clearer picture of what Fletcher and the rest of the Flyers' front office will use as their strategy for the remaining 21 games this season, but it is clear that the team has more potential and is playing better than it has in quite a few years.

Will they give the team the proper kind of reinforcements to close the deal, get home ice advantage and make a deep playoff run?

We have three days to find out.