No, Cindy Bass won't have 'blood on her hands' if bulletproof-glass bill passes

The councilwoman's stop-and-go store bill is tricky and necessary, but compromises still need to be struck 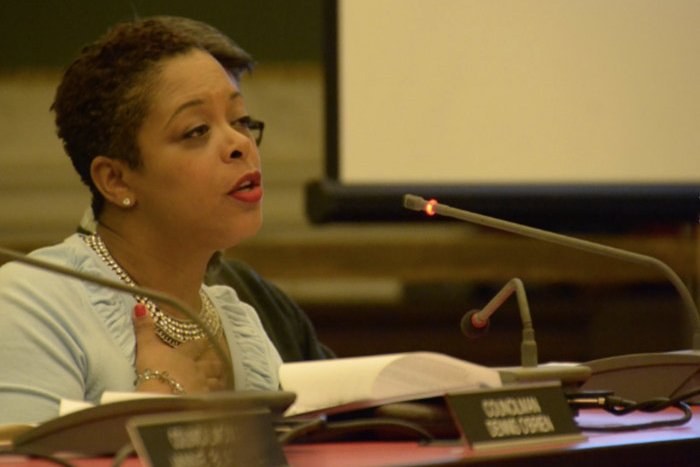 When I first heard about City Councilwoman Cindy Bass’s push to force some Philadelphia corner stores to remove bulletproof glass, one image immediately came to mind.

Omar Little, the bad-ass gangsta who robbed drug dealers in a more-than-loosely-based-on-reality Baltimore, walks into a corner store to get a soft pack of Newport cigarettes.

As he stands on the customer side of the bulletproof glass, a bell sounds in the background indicating that someone else has entered the store. Omar looks over. He sees a little kid named Kenard and goes back about his business of sliding cash through the tray.

Within seconds, a gunshot echoes off the walls (and bulletproof glass). Omar falls to the ground, dead, gunshot to the head. The shopkeeper screams. Kenard points the gun in her direction. Instead of firing at her through bulletproof glass, he drops the gun on the ground and flees.

The vignette may be fictional, but it seamlessly slides into the realm of reality as most situations on that fine program did.

It guided my initial reaction to Bass’s push, which aligned with the seeming majority of public opinion , including the shopkeepers and at least one of her council peers, City Councilman David Oh who called the measure “troubling.”

It also led me to buy into another angle of criticism: If shopkeepers are scared of their customers in Philadelphia’s rougher neighborhoods, just sell the shops to people who live in the community and there's no need to hide behind bulletproof glass to protect themselves.

"If these stores sold hypodermic needles, there’d be outrage, there’d be people screaming to ‘Shut 'em down.’ But with crack pipes, it’s OK?" – Councilwoman Cindy Bass

After careful consideration, Council’s Committee on Public Health and Human Services sent the measure to City Council for a vote possibly later this week.

It’ll surely be a heated Council meeting if past behavior is any predictor.

Folks, the critics’ concerns are nothing short of valid. To say this is a matter of life and death – unlike many times when that phrase is trotted out – is not all that much of an exaggeration.

But rather than blasting the measure and claiming the councilwoman would have “blood on her hands” as others have done, I asked Bass on Friday to explain where she’s coming from with it.

What she said put things into proper perspective.

Hearing her out instead of rushing to judgment was only fair because – having covered the Germantown portion of her Eighth Councilmanic District in the past – I’ve seen firsthand what kind of nuisances these places can become for neighbors and passersby.

She said more than two years of research – and “20-plus years” of exposure to stop and go's – went into the proposal.

“It’s not something that I’ve taken on lightly,” she explained.

No, she doesn’t want to remove bulletproof glass from all such businesses. The measure would not require small businesses to remove the glass.

Over the next few years, L&I would check businesses licensed to sell alcohol, a bathroom and seating for 30 to eat. You know, to make sure they're already in compliance with the law, something state inspectors would be doing if they weren't so understaffed.

The purpose? Getting these sorts of establishments “to change their business model.” She said she's focused on places that sell beer, mini-shot bottles and drug paraphernalia in the same store where children are buying “chips, candy and snacks” around the time most people are grabbing breakfast.

“What I want to communicate to people is that these are beer/deli type places,” said Bass, noting the bill would merely bring the city in line with state laws and regulations. “About 90 percent (of these establishments) in my district (with restaurant licensure) don’t even sell food.

“They sell other products that can be turned into street drugs, like cold medications. They sell crack pipes. If these stores sold hypodermic needles, there’d be outrage, there’d be people screaming to ‘Shut 'em down.’ But with crack pipes, it’s OK? That should tell you something.”

“I’m not asking anybody to take my word for it. I’m asking them to go and see it for themselves." – Cindy Bass

It tells me a couple things. 1) These aren’t role-model businesses. 2) Some are breaking the rules. 3) I also would protest these businesses if my child was forced to shop amid such squalor.

“I believe this is the right thing to do for the communities," she said. "We want businesses thriving in our neighborhoods. I’m not trying to shut businesses down.

"The last thing I want are a bunch of empty storefronts, but they need to change their business model," she said. "These are businesses pushing addictive behavior – whether that’s drugs or alcohol – and we have to call that out.”

Getting a little heated, she offered a vignette when I broached the criticisms.

She shared that a local television reporter steered her in the direction of a business near Broad and Susquehenna so she could see “what a great job this shop is doing” as she pushed the bill forward.

So, she went there at 9 a.m. the next day. There, she said, she saw a man who was already visibly intoxicated “hustling up money to get more beer.” That wasn’t the worst part.

“Someone was inside the store selling drugs, a straight-up street-corner pharmaceutical representative,” she said. “I couldn’t believe (the reporter) came in and didn’t see everything I saw.”

Then, she walked to a nearby business that did not have bulletproof glass. It was, she said, a clean business with no drug sales, no loitering, people sitting in booths eating.

“I’m not asking anybody to take my word for it,” she said. “I’m asking them to go and see it for themselves. Once they see it, they’ll get where I’m coming from.

“When we clean that up, you see an immediate change in feel of the neighborhood. Closing them down is not the option we want, though in some cases, it might be appropriate after L&I gets in (and sees what’s going on). You can’t say that’s not appropriate across the board.”

With the vote potentially coming on Thursday, Bass thinks she has enough support to get it passed but will continue working to shore up backing this week.

Here's the rub: It is possible – like I do – to agree with everything Bass says about the need to clean up nuisance businesses.

How can anybody (shopkeepers included) argue against protecting kids grabbing a bag of Fritos from seeing some loud drunk hitting up folks for cash so he can top his beer off with a few hits from a crack pipe?

By the same token, though, how can you argue against a shopkeeper trying his or her hardest to stay in business – in a respectable fashion – from wanting the extra measure of bulletproof-glass security?

We'd be putting a lot of faith in L&I inspectors to get this right over the next few years as they fan out to these nuisance businesses. The bad businesses need to get smacked around, but the good ones shouldn't get caught in the proverbial crossfire.

Still, it’s an overreaction to say she’d be responsible for any shopkeeper death should her bill pass, that there'd be "blood on her hands." If they were following the laws governing their businesses, the bulletproof glass wouldn't already be there.

It’s also an overreaction to codify the stripping away of that measure of safety for business owners.

If they want it, they should be able to have it, despite how well-meaning residents say it makes them feel deep down inside. Symbolic stands don't stop bullets.

The bad shops do need to change their business models, but there's got to be a happier medium up to, and including, enforcement that would fine and/or shutter them to the brink of permanent closure if they don't play by the rules.

If that's not the better compromise, Council would be well served to figure one out before they rush to vote this week on a well-meaning bill.