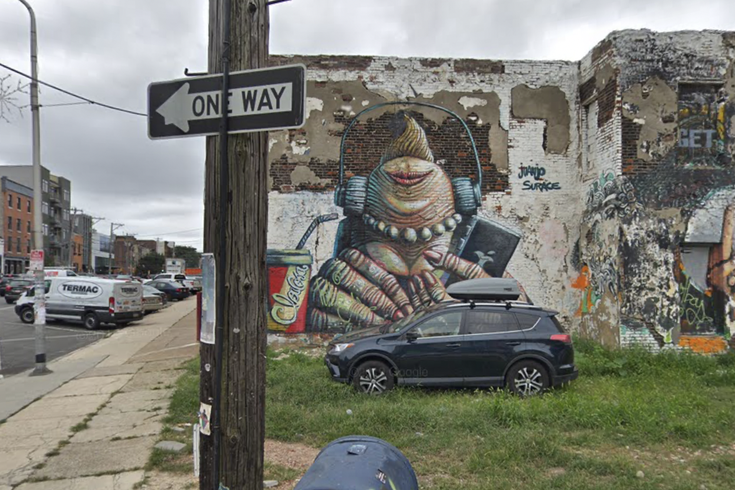 This mural by pop surrealist Juanjo Surace has livened up the southwest corner of 2nd and Poplar streets for several years. The intersection has showcase the work of numerous muralists. Plans for a 5-story mixed-used building are now in the works for the property where Surace and others left their mark.

For much of the last decade, the sunny southwest corner of 2nd and Poplar streets in Northern Liberties has been a canvas for street artists who have helped give the neighborhood its charm. At a busy intersection with the Foodery and Standard Tap, greetings from an alien listening to music with a jumbo soda and fries have been nice.

It looks like the alien mural and a few others at the 828-40 North 2nd. St. will be coming down in the next year as plans take shape for a new mixed-use building.

The Philadelphia Business Journal reported earlier this month that Tower Investments, the development firm led by Bart Blatstein, sold the property to Catalyst City Development for $5 million. Catalyst reportedly will partner with Southwood Properties to demolish the existing structure and build a five-story apartment complex with 9,500 square feet of ground floor retail.

Additional details about the planned project have not yet been revealed. There are no renderings available at this point.

Over the years, a number of street artists have made use of the building that will be torn down.

A vacant three-story building that formerly stood at that corner had a bunch of art on it before the structure was demolished in 2014. That gave way, initially, to a majestic buffalo by Mauro Correro, which eventually was painted over by Argentine pop surrealist Juanjo Surace. It's impossible to ignore the alien with her eyes missing, spindly fingers and rather large chest you'd prefer not to have noticed.

On the far wall, the first art to spring up was an eagle with a totem head over it and a "Respect the Hopi" hashtag, apparently the work of Louis Masai. The California duo Menace Resa later added Benjamin Franklin and some American flag-themed lettering.

Lastly, there is a big rooster and a pair of human hands between these two murals that was painted by Brooklyn's Ru8icon.

OCF Realty has a series of photos showing the progression of the three walls over the years. One the past few years, the murals have all faded considerably.

The redevelopment of certain lots along 2nd Street in Northern Liberties has taken ages, even as the corridor has enjoyed a 20-year run as a neighborhood destination in Philadelphia. Murals like these have contributed to that experience, adding character to stagnant properties in an area whose walkability is sometimes short of ideal.

It's sort of hard to imagine the corner of 2nd and Poplar without street art, but OCF reports work on this project could start as soon as this summer.