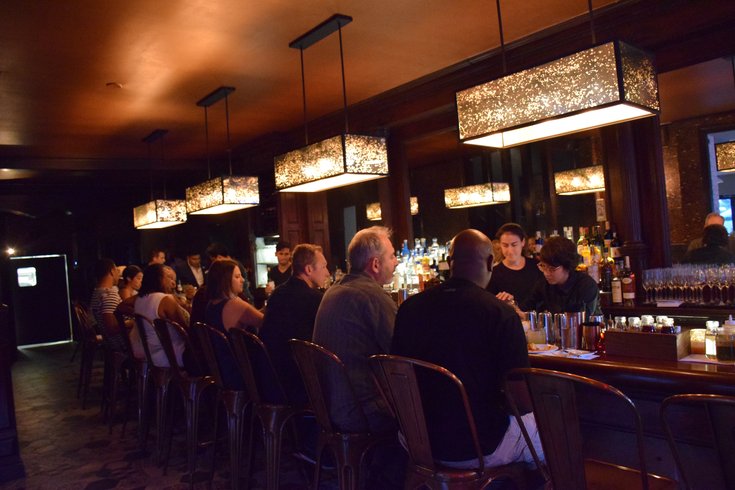 The bar area at Kanella features warm copper hues, like the metallic accents in this cliffside town–themed wallcovering.

Getting Philadelphians and New Yorkers to agree on just about anything is something of an accomplishment, both in general and in the restaurant world. Save for crossovers such as Stephen Starr and Peter Serpico, critical consensus can be hard to come by among the friendly rivals.

New York Times contributor Robert Draper, a GQ correspondent who lives in Washington, D.C., recently enjoyed a "Four-Day Feast in Philadelphia" and went so far as to recommend gorging yourself here as a cure for post-election anxiety. He's not from New York City, but close enough.

"Even leaving aside its indigenous cheesesteak sandwiches and soft pretzels, Philly as a culinary destination feels like an organic accomplishment — the natural outcome of being itself — rather than a banal eventuality of economic development," Draper wrote of Philly's restaurant scene.

Kanella, the rising Greek-Cypriot BYOB in South Philly, was an obvious pick after garnering acknowledgement from Eater as one of the best new restaurants in the United States. Owner Konstantinos Pistillides also recently opened Kanella Grill, a brunch and street food complement, at the restaurant's old location. Draper had this to say:

The food does most of the talking at this spacious, unprepossessing restaurant ... Konstantinos Pitsillides has his priorities right.

At Vedge, where Draper went on a friend's recommendation, the critic shared some skepticism about whether a vegan restaurant could hold its own among the city's best restaurants. Apart from the food, Draper found that Vedge dispelled certain myths about the aura of such establishments.

There is nothing earth-mothery about Vedge’s raffish oak interior, nothing to suggest that excessive wellness is afoot. For that matter, the upmarket clientele in the Midtown Village enclave casually referred to by all as the Gayborhood looked anything but austere.

Next up, Draper checked out East Passyunk Avenue's ITV, an abbreviation for "In the Valley," which is the English translation for the Lenape Indian word "Passyunk."

I took my place at the bar and started with the velvety Green Zebra Farm tomato salad with pistachios and red onions. What then followed was one of the best dishes I would encounter during my stay in Philadelphia: a smoked trout and trout roe lasciviously spread over chewy pumpernickel bread.

Finally, Draper dined at Rittenhouse Square's Vernick, where he found an extensive cocktail list and a simple but enticing menu of savory dishes.

Greg Vernick’s food menu is deceptively straightforward: whole Amish chicken. Pork chop Milanese. Grilled black sea bass. The touch of the well-traveled chef (who has worked in kitchens from Vancouver to Tokyo to Qatar) is famously light, which is not by any means to say dull.

If you're curious about local opinions of Philly's culinary offerings, check out the winners of Eater's annual food and drink awards.