Checking in on the Eagles' overhauled (and overcrowded) wide receiver corps

On Monday, Eagles offensive coordinator Frank Reich was asked about a few of his receivers, which is one of the positions that should produce interesting roster battles come training camp.

Let's take a look at their current depth chart at wideout, which features a change at second-string after what we've seen at OTAs (we'll get to that in a minute):

For now, however, they're still working on getting on the same page. And despite a sloppy drop-filled day at OTAs, Reich believes they'll get better with more time together.

"It's just a lot of reps... It's individual drills. It's find a little time," he said when asked about the challenges of having so many new faces. "It's these guys spending time in the building talking. It's always better to do it, obviously, but it all kind of factors in there. But between all the OTA reps and then you get in training camp, I'm pretty confident we have sufficient time to kind of work out the kinks, get the timing that you want."

According to our own Jimmy Kempski, however, their latest practice didn't look much better than the ones that preceded it. Here's what he had to say in his OTA practice notes for Monday (Jordan Matthews again missed practice with knee tendinitis):

#JimmySays: "It was a very sloppy day for the offense, with a lot of drops by the skill players. The players that I saw drop passes were Nelson Agholor, Trey Burton, Donnel Pumphrey, Billy Brown, Mack Hollins, and Brent Celek. Celek's drop was picked off by Nigel Bradham. There was a light rain, but that shouldn't be much of an excuse."

[NOTE: We'll continue to check back with Jimmy as we get into specific receivers]

Let's take a look at what Reich had to say about his new-look receiving corps – and where returning players like DGB and Nelson Agholor fit in with those guys – heading into the team's third week of OTAs: 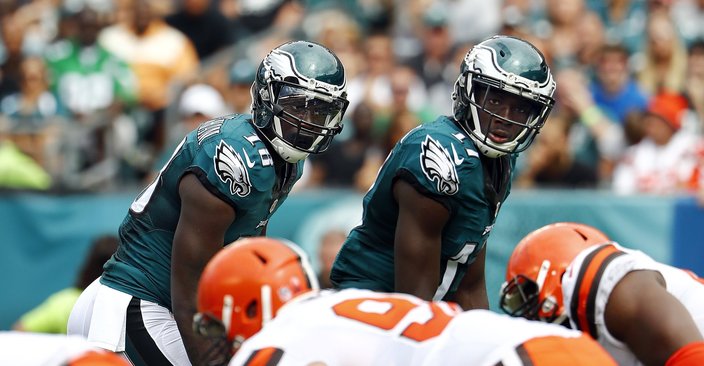 Q. What does WR Dorial Green-Beckham have to show to kind of make sure he has a spot on the team? Because obviously you guys are pretty crowded at wide receiver now...

FRANK REICH: Yeah, it is crowded, and this is the NFL. It's competitive. It's competitive, and that's a position that we needed some more productivity out of this year, and so I think we did a good job of making that a competitive room this year.

So the whole key for receivers is just being playmakers, being consistent, showing you can get open versus press coverage, make plays on third down, make plays in the red zone, find ways to make big chunk plays. In this league it's hard to go – we say it every year – it's hard to go 12, 14 plays all the time. So you've got to stay on the field. You've got to make those plays right on third down, but you've got to find ways to make chunk plays. So who does that consistently? Who can make chunk plays consistently? Who has a knack of making contested catches? And then who has a knack in the red zone?

Q. Did DGB not do enough of that last season?

I think it was a growing process for everybody. First year, first system, rookie quarterback, you know, the whole deal. I thought he did some of that, and I'm encouraged with DGB. I'm a fan. He has traits that are unique in his size and length and his strength. You saw it a few times last year, every now and then when we're watching the clips from last year and you see he's hard to tackle. Once he gets a ball, he's so big and strong, and he's athletic and he's got good feet for a guy that's that big. He's in a good situation and it's going to be a competitive battle.

DGB has all the physical tools to be a big target for Carson Wentz (see what I did there?), but the 6-foot-5 wideout is heading into his third year and has yet to put it all together, not unlike teammate Nelson Agholor. The additions of Shelton Gibson and Mack Hollins in the draft (after the team already added Alshon Jeffery and Torrey Smith in free agency) seemed like a sure sign that the team was reading to move on from either Green-Beckham or Agholor. To this point, however, they've actually been outperforming the rookies in camp ... thanks in part to some less-than-stellar performances from one of the young wideouts (more on that in a second).

So, for now, DGB and Agholor remain the second-string wideouts.

#JimmySays: "Dorial Green-Beckham actually did some nice things today, unlike the first two media-attended practices. He caught three or four passes on slant routes, which is the only good pattern on the route tree that I've seen him run well so far in his time in Philly."

Q. What do you think you're getting in WRs Mack Hollins and Shelton Gibson?

FRANK REICH: Really like the receivers we got. Obviously Gibson, he's got the trait of speed that you just can't buy. That's shown up on the field some. Mack Hollins is kind of a build-the-speed guy with great length and tremendous ball skills. That's flashed already. He's got tremendous ball skills. Very smart, very good feet for a big man. Very excited about his development.

While the two receivers selected in by the Birds in the 2017 NFL Draft may have 'flashed' at camp, it most likely wasn't during one of the practices reporters were allowed to attend. Both of these guys are most likely going to be on the team this year, but it's beginning to look like the majority of their work could come on special teams. The good news is, that's kind of Mack Hollins' thing.

#JimmySays: "I still haven't seen much of anything out of rookie fifth-round pick Shelton Gibson, who has been nearly invisible, though it's worth noting that the media has only attended three of the team's seven practices so far. Today, on one route that I watched the quarterback was able to keep a play alive and Gibson made three different moves on former CFL corner Mitchell White. White was able to stay right in his hip pocket for at least six seconds, which is an eternity. That was less than encouraging."

This one requires a little bit of a preface. Yes, Pumphrey is a rookie running back. And, yes, he broke the NCAA's all-time career rushing record last year. And, again yes, his biggest contribution to the Eagles in 2017 could come in the passing game. And because of that, the Eagles could opt to carry one less slot receiver, especially since they already have another, more-experience pass-catching back in Darren Sproles (not to mention that Pumphrey can also play special teams).

Anyway, back to Reich...

Q. Along those lines, RB Donnel Pumphrey, how do you see him fitting in this year and the role he'll have?

FRANK REICH: He's looked good. Really, you can just tell. Obviously all that productivity he had in college. He came in and it's like, okay, here's a guy, you know, he was a stud in college with all of his productivity. How is he going to fit into a pro system? Can he do it all? He had so much yardage from the backfield – how productive can he be if we move him around and as a pass receiver? And it's early. You don't get too excited about it just yet, but I am excited about his ball skills. I'm excited about his route-running skills. I think he's on the right track.

Given his size, it makes sense to use him in the passing game, allowing him to catch the ball in space and create from there. Too many rushes between the tackles at the NFL level and Pumphrey's shelf life could be quite short. After all, Sproles has never carried the ball more than 100 times in any of his 11 NFL season – his career high came last year when he had 94 rushing attempts. It's why he's still one of the Eagles most dangerous weapons at 33 years old, past the age when most running backs begin to rapidly deteriorate, especially ones of his size.

So while it seems silly to take the NCAA rushing leader and turn him into a hybrid-back, it's not at all. In fact, it's quite the opposite.

Jimmy actually wrote about Pumphrey lining up in the slot earlier on Monday. You can read that full story, here, but here's just a little snippet:

#JimmySays: "In the Andy Reid years, the Eagles were effective when they used two-running back sets, most notably with Brian Westbrook and Correll Buckhalter. It appears that they are now exploring similar possibilities with Pumphrey early this offseason, even using the 5'9, 170 pound Pumphrey alongside the Eagles' other diminutive back, Darren Sproles."