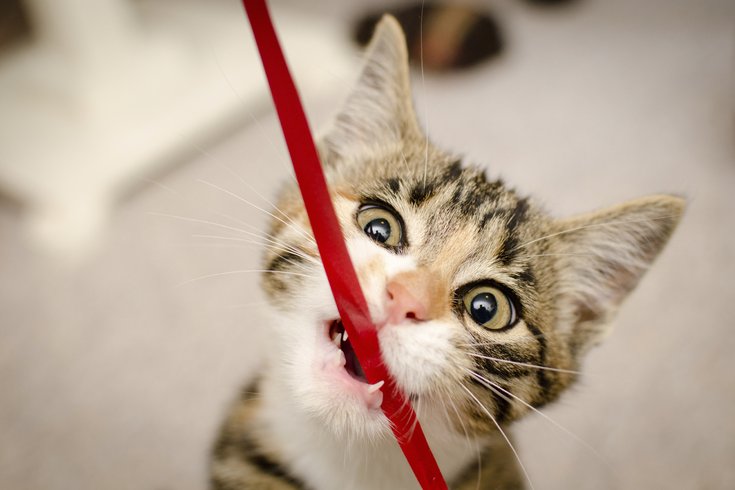 It'll be easier to celebrate Sixers wins this season if your cat loses a few pounds first.

Although fantasy sports company Monster Roster, who we profiled back in April, has been working out of the Sixers' new Camden facility for some time now, the organization officially opened its 8,000 square-foot start-up incubator, The Sixers Innovation Lab Crafted by Kimball, on Tuesday.

While it's located just a short walk from where Joel Embiid and the rest of the Sixers practice, the four companies introduced on Tuesday, which range from exports to pet care, have, for the most part, very little to do with what's taking place around the rest of the facility.

“Since the announcement of the Sixers Innovation Lab Crafted by Kimball, we’ve seen hundreds of applications from ambitious startups around the world interested in joining our lab team here,” said Seth Berger, the former founder and CEO of AND1 who now serves as Sixers Innovation Lab Managing Director. “The four companies we welcome into our lab today are entrepreneurs who have demonstrated the most innovative thinking, strategic planning, vision and most importantly, heart. Our goal is to remove the ‘noise’ that drowns so many startups, and give them the resources to focus on what they do best, innovating and thinking consumer-first.”

One of the newly-announced companies, however, could potentially help out cat-owning Sixers fans across the region this season.

With every reason to believe that they'll win more games than they have in quite a few years, fans could find themselves wanting to #RaiseTheCat much more often. The phenomenon, which spread rapidly over social media thanks to help from Ben Simmons and Twitter user @GipperGrove during the team's red-hot January.

As a cat owner, I can attest to the fact that lifting one's cat can be difficult, especially if you have one that prefers not to be raised over – the scratch marks on my arm will prove this is a real thing. But it can also be a problem if your cat is – how do I say this without being offensive? – a little big-boned.

Give your #cat the thrill of the hunt! Give wild play everyday with #NoBowl pic.twitter.com/IUcmluMSDQ

Founded in 2014 by Dr. Elizabeth Bales, a Chestnut Hill native and graduate of The University of Pennsylvania School of Veterinary Medicine, Doc & Phoebe's Cat Co. has made national news and won several awards for its NoBowl Feeding System, a system that not only helps your cat keep his or her weight in check, but also helps prevent bad behavior as well.

Here's more from the press release:

The innovative, award-winning, feeding system has taken the $66-billion-dollar pet food industry by storm, and is currently utilized by over 15,000 cats around the world. Prior to joining the Sixers Innovation Lab Crafted by Kimball, the product has been chronicled by FOX News, Business Insider, The New York Times, and Daily Mail. Formerly branded as The NoBowl Feeding System, Doc & Phoebe’s Cat Co. has been awarded the International Cat Care’s “Cat-Friendly Award,” was named the “Best New Cat Product” at 2016 Super Zoo, and is celebrated by veterinarians and feline behaviorists around the globe as the correct way to feed cats.

The company was founded in 2014 by University of Pennsylvania School of Veterinary Medicine 2000, Middlebury College 1995 alumna and Chestnut Hill, Pennsylvania native, Dr. Elizabeth Bales; who developed the product as a solution to the epidemic of cat behavior problems she recognized over 17 years as a practicing veterinarian. For more information, visit DocAndPhoebe.com or follow Doc & Phoebe’s Cat Co. on social media at via  Twitter (@DocAndPhoebe), Facebook, YouTube and Instagram (@DocAndPhoebe).

We wrote about Dr. Bales and her NoBowl Feeding System last year after her Kickstarter campaign surpassed it's fundraising goal.

And given how often my full-figured female cat is likely to be raised throughout the season, I may have to give Doc and Phoebe's method a try.

Here's a look at what those two companies do (according to the press release the Sixers sent out).

U GIT GUD is an online, hyper-improvement training platform providing professional, amateur and beginner esports players with (patent-pending) dynamic analytics and personalized recommendations with insightful videos from some of the top esports players in the world.

The company was founded in 2017 by Cornell Alumni (2013), Shinggo Lu and Alan Liang. The 26-year-olds hail from Iowa City, Iowa and Champaign, Illinois, respectively. For more information visit UGITGUD.com or follow U GIT GUD on social media via Twitter (@UGITGUD) and Facebook.

Live Life Nice is a cause-driven digital media company with a simple mission: to inspire people to “Be Nice, Do Nice.”  Through original, moving content, Live Life Nice will launch a social movement embarking on a quest to infuse and highlight positive news into society. Featuring compelling video content and the compassionate, engaged consumers it galvanizes, Live Life Nice provides an opportunity for cause-minded brands to integrate directly into captivating, poignant and accessible stories.

The company was founded in 2014 by Voorhees, New Jersey native Christian Crosby, the In-Arena Game Day Host for the Philadelphia 76ers between 2014 and 2017. Crosby began his career with the iconic team at 18 as a trampoline dunker, in-game performer and media personality. For more information, go to LiveLifeNice.com or follow Live Life Nice on Twitter (@LiveLifeNice), Facebook and Instagram (@LiveLifeNice).