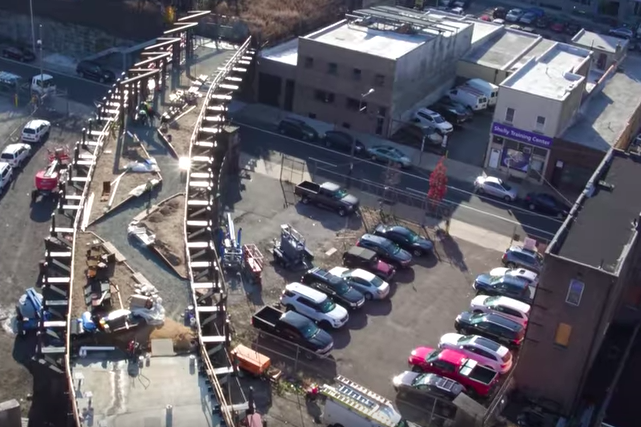 A portion of the city's upcoming rail park is shown in a shot captured by Philly By Drone in November. The first phase of the project will open later than expected, the Center City District said on Tuesday.

The first phase of the Philadelphia Rail Park will open later than planned.

The Center City District, which has led fundraising efforts for the much-anticipated park along an abandoned railway, said on Tuesday that the project's first phase won't open for another few months because a pedestrian bridge over 13th Street needs to be replaced.

A portion of the structural beams buried about a foot below ground were found to be rusted and corroded during the renovation process. As a result, the district said the 130-year-old bridge will need to be rebuilt for "safety and ongoing maintenance reasons."

The unveiling had been slated for February.

The Center City District now anticipates the park will open to the public sometime in the spring of 2018, according to a press release from the organization.

The park's first phase, a $10.3 million endeavor, will run along an elevated quarter-mile stretch of the former Reading Railroad viaduct between 13th Street and the south side of Callowhill Street. The railway was first built for passenger and freight trains in the 1890s and is owned by SEPTA, which is leasing it out to the Center City District until construction is complete.

“While this unanticipated delay in the opening of the Rail Park is disappointing, the good news is that it will enable us to open the park at the very best time of year,” Paul R. Levy, the Center City District's president and CEO, said in a statement.

The Center City District plans to select a contractor by late February to reconstruct a bridge along the viaduct that runs over 13th Street.

The replacement bridge will include new steel support beams and concrete decking placed on top of existing stone retaining walls. Steel girders that currently project above walking level will be removed, restored and put back in place on top of the new bridge, officials said.

The girders will be used to frame walkways and create large planters for trees and shrubs for a look that will be substantially similar to what was originally designed as the primary public entrance to the park at 13th and Noble streets.

In the meantime, the project's main contractor, AP Construction, will provide finishing touches that include installing benches, walkways, lighting and completing the renovation of Noble Street from Broad to 12th Street. By early spring, crews plan to finish landscaping work and have all park walkways and benches installed on the elevated viaduct.

Ultimately, the Center City District plans to extend the park by adding another mile along the viaduct to Fairmount Avenue and Ninth Street.

The district then hopes to shift construction westward through a below-street-level stretch known as The Viaduct and an underground section known as The Tunnel. Plans call for a three-mile-long park ending in Brewerytown, near the Philadelphia Museum of Art, Boathouse Row and the Philadelphia Zoo.