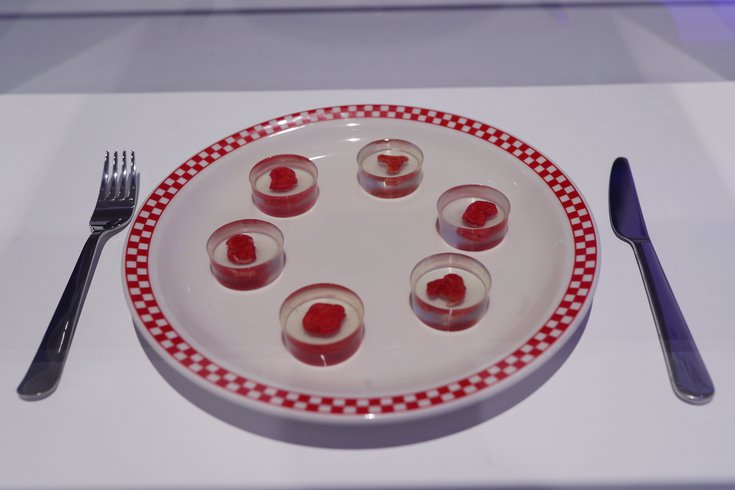 'Ouroboros Steak' by Orkan Telhan, showing steaks grown from human cells, is sparking controversy while on display at London's Design Museum. The piece originally was commissioned for the Philadelphia Museum of Art.

An art piece depicting miniature steaks made from human cells commissioned for the Philadelphia Museum of Art in 2019 caused an uproar on the internet only after it went on display in London.

Some are saying the artwork comes too close to promoting cannibalism for their tastes. But the artist, a professor at the University of Pennsylvania, intended the piece to be satire, the Inquirer reported this week..

Creator Orkan Telhan, who is both an artist and associate professor at Penn, was asked to make the work for the art museum's "Designs for Different Futures" exhibit, which was on display in 2019.

The piece is titled "Ouroboros Steak" and Telhan presents it as a "DIY meal kit" for replicating your own cells for consumption.

It was created while considering climate change's negative impact on food production in the future, and meant as a criticism of the rising popularity of vegetarian lab-grown meats.

Telhan, who named the piece after the ancient symbol of a snake that is eating its own tail, sees his work as a commentary on a future where meat production and other climate change-causing factors have caused so much damage to the environment that the scarcity of food has created a need for human steaks, he told the New York Times.

It's similar to a concern raised in the past week week after California Water Futures began trading their stocks, speculating that one day water will become an increasingly scarce resource worldwide, due to climate change, to the point that if becomes a valuable and traceable commodity.

A spoof promotional website created accompany "Ouroboros Steak" reads, "Growing yourself ensures that you and your loved ones always know the origin of your food, how it has been raised and that its cells were acquired ethically and consensually."

Telhan even created a fake Twitter for the project that posts made-up inspirational quotes from food celebrities, like Guy Fieri, to promote its "sustainability" product.

“Cooking is all about people. Food is maybe the only universal thing that really has the power to bring everyone together. No matter what culture, everywhere around the world, people get together to eat”, Guy Fieri#cultivatedmeat #cleanmeat #kitchentissueengineering pic.twitter.com/R0gdC5jkJ5

The artwork received little, if any, criticisms of the ethical nature of the project while on display in Philadelphia. It arrived at London's Design Museum in October 2020., and there, things started to change.

"Ouroboros Steak" was nominated for an aware, launching the piece into the spotlight. Subsequently, FOX News wrote about the display earlier this fall, and that's where the internet first got its hands it.

Some social media users said it promoted cannibalism, others just said it was gross. Mixed among them were those who seemed to get it and said the human steaks made them think – just as the satirical artwork intended.

"I'm grossed out, fascinated and hungry all at once," said another.

"Breakfast Before Extinction, indeed. Bravo. So necessary. The mirror. The kit. Everyone relax, for '..there are no plans to bring meat made from human cells to market'," said one Twitter user, quoting the New York Times piece.