On the Parkway, tens of thousands get to glimpse Francis

"We felt he was looking our way the whole time," said one pilgrim. "I think a lot of people felt the same way." 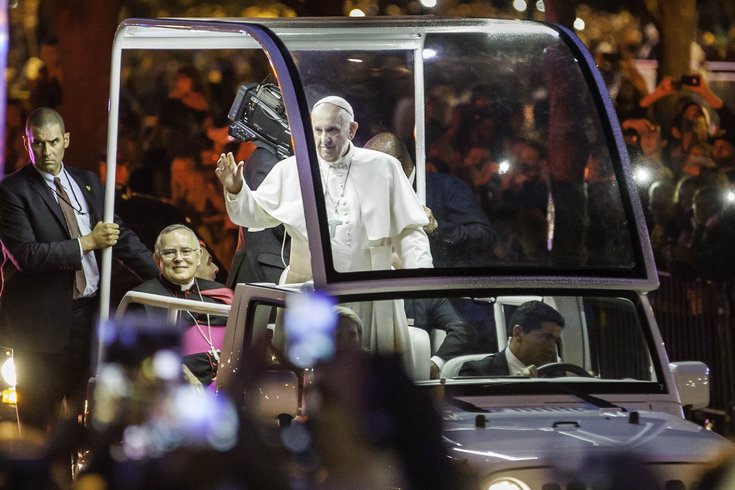 Pope Francis waves from the popemobile during the Papal Parade at the Festival of Families on Saturday, Sept. 26, 2015, along Benjamin Franklin Parkway in Center City Philadelphia.

Pope Francis thrilled those who waited for hours on the Benjamin Franklin Parkway with an illuminated ride in his popemobile on Saturday night, waving to tens of thousands during a papal parade.

And he wowed them.

Darryl Mack of Torresdale held his 12-year-old son, Nicholas, on his shoulders, as Francis drove by.

Darryl, who stood alongside his wife, Andrea, called it "the chance of a lifetime."

"Jesus represented on Earth," Keeney said. "When he was coming down, the sound of the crowd was incredible. It was a high-pitched scream. It was pretty amazing."

His wife, Lorey, came to the Parkway in 1979, when Pope John Paul II celebrated Mass for a million pilgrims on Logan Circle. That was a more solemn event, she said.

"I don't remember them having a festival," she said.

Franklin Stockdale of Punxsutawney, Pa. stood alongside his friend Jon Williams, of Havertown, as Pope Francis came by.

"We felt he was looking our way the whole time," Stockdale said. "I think a lot of people felt the same way." 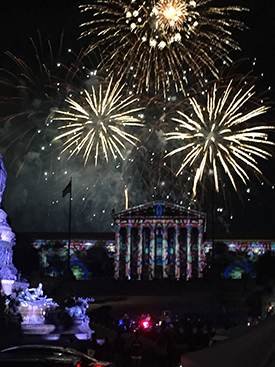 But for Williams, nothing compared to seeing Pope Francis in Philadelphia.

"This is ... different because it's in my hometown," Williams said. "It not all the way across the world. I never thought anything like this would happen here."

The pontiff rode along the Parkway before the start of the Festival of Families, which included musical performances by the Sisters Sledge and The Fray.

Many of the faithful waited for hours and hours to catch a too-brief look at the pope during the parade.

Maria Socorro-Martinez, of Grand Rapids Michigan, arrived on the Parkway at 9 a.m. Saturday. But this wasn't her first experience in a large crowd. 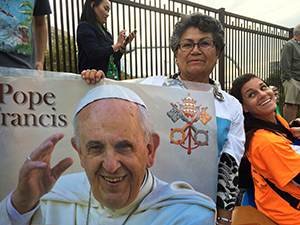 Socorro-Martinez, pictured left, traveled to New York earlier this week, where she saw Pope Francis during a parade at Central Park.

"I got a picture off him waving when he was getting out at Central Park," she said.

Here, she held a huge sign depicting Pope Francis. Seeing him, she said, is "the biggest blessing ever."

"I will yell until he hears me," she said earlier in the day.

The pope will greet the crowd from the popemobile on a parade up and down the Parkway before taking the stage at the festival.

Bob Burns, of Chanassen, Minn., awaited Pope Francis' arrival on the Parkway near 20th Street with his wife, Ashley, and their six-month-old daughter, Gianna.

"We were here for the World Meeting of Families," Burns said. "We obviously wanted to be able to see Pope Francis in person and attend Mass tomorrow. That's the highlight of the week."

Burns, who, at age 21, saw Pope John Paul II in Rome, said it "awesome" to see the head of the Catholic Church.

"I cried," Burns said. "When you're near someone who lives what he preaches, it's powerful."

Chris Annd, a native of India who now lives in Washington, has waited on the Parkway for five hours to see Pope Francis.

"I'm so excited," Annd said. "As a Christian person, to get a glimpse of the pope would be great."

Martin Hanley traveled from Green Castle, Indiana for the opportunity to see the leader of the Roman Catholic Church.

Hanley previously traveled to the Vatican where he went to St. Peter's Basilica, but a cardinal served Mass.

He said he has struggled to imagine what it will be like to see Pope Francis. But he knows it will be impactful.

"You can trace him back to Saint Peter and back to Christ," Hanley said. "That lineage is strong. It's unthinkable, I guess, to try to imagine. It will be pretty incredible." 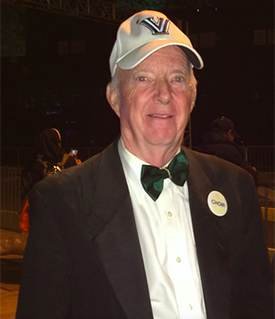 For Jack McMenamin, 69,  of Philadelphia, this was an opportunity to celebrate his faith with a second pope in Philadelphia.

McMenamin, left, sang with a choir for Pope John Paul II  when he came to Philadelphia in 1979. He waited in the Parkway Saturday for a glimpse of Pope Francis wearing the same choir button on his lapel he wore then.

"This has been, for me, at night, just an amazing experience," he said. "From the size of the crowd, everyone has just been calm. It's really amazing."

Mike and Marie Gill, both 60, from Drexel Hill, also saw Pope John Paul II during his visit, but couldn't resist waiting hours for a glimpse of the pontiff.

"This is just fabulous," Mike Gill said. "It was totally worth the wait. I didn't think we were even going to see him."

Even the young at heart are aiming for a pristine view, with several children who have climbed the trees along the Parkway to get a better view.

Those who don't see the pope on the Parkway may have to settle for a his image – on a keepsake.

Various types of memorabilia are available at an official merchandise stand near 20th Street. Items include Pope Francis prayer cards, rosaries and T-shirts.

"They seem to like the Pope doll," said Bill Gwynn, who was manning the stand. "That's somewhat campy."