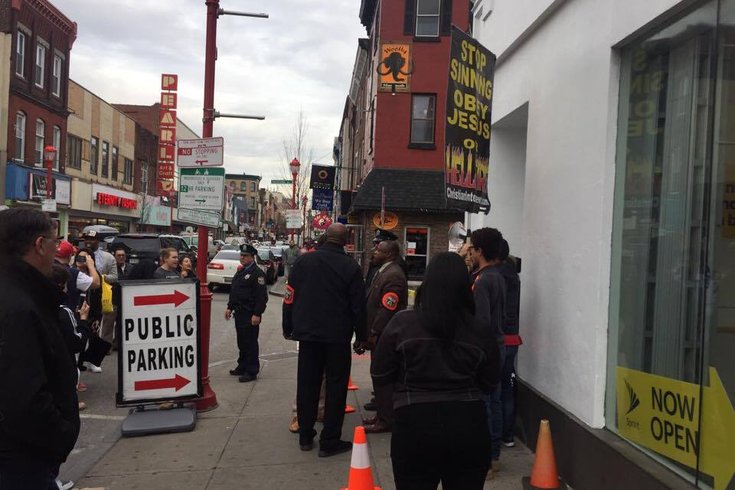 The demonstration took place on the 400 block of South Street across from the Mardi Gras celebration at the New Orleans-themed bar Fat Tuesday. The man holding the megaphone, protected by a heavy police presence, would only identify himself as "Pastor Aiden" and said he was trying to get people to stop sinning so they wouldn't "go to hell."

Asked why he was targeting the bar, he said it was because the Bible says “drunks go to hell.”

Behind him, a member of his small entourage held up a sign listing the targets of his street-side sermon. Included among them were gays, Muslims, drunks, "whores" and Pope Francis.

Pastor Aiden's blasted his message through a megaphone, drawing the ire of many who openly – and creatively – denounced his rhetoric as hateful.

One woman danced in the street, shaking her butt up and down as others cheered. Another tried getting those on the sidewalks and sitting on the deck of Fat Tuesday's to collectively shout "woo" to drown him out.

Others were less polite, like one man who positioned himself as close to Pastor Aiden as the Philadelphia Police Department's civil affairs officers would allow and shouted "f---ing scumbag" in the pastor's face.

Huge police presence outside Fat Tuesday on south street as preacher spouts off against "sinners" pic.twitter.com/RHDfXOXtfU

Allitia DiBernardo of Queen Village said when she heard an anti-gay rally was being held in her neighborhood, she showed up with a giant rainbow flag draped around her neck. 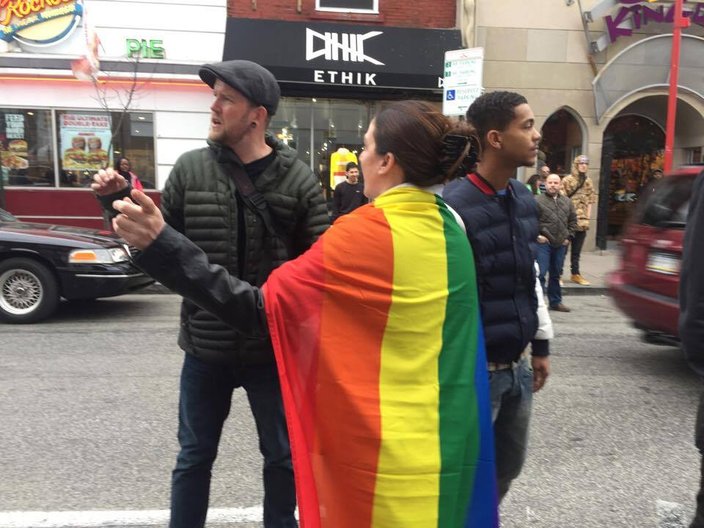 Allitia DiBernardo, of Queen Village, shows off the rainbow flag she brought to demonstrate against a self-described 'pastor' holding a protest outside Fat Tuesdays on South Street.

James Linnon rode by on is bike earlier and came back to stop and see what was going on. He said that it was important for "even the most despicable types" to have the platform of free speech.

"I don't think there's necessarily any wisdom I can gain" from the pastor's preachings, Linnon said. However, he said it was great to see how the protest brought everyone together against the man's message.

Others disagreed the pastor should be permitted to say the things he was shouting into the megaphone. Alex McKinley, 24, of Philadelphia, was among the people who tried getting in the face of Pastor Aiden. The demonstration made him sick to his stomach, he said.

"For some reason they're saying this is free speech, but it's 100 percent a hate crime," McKinley said.