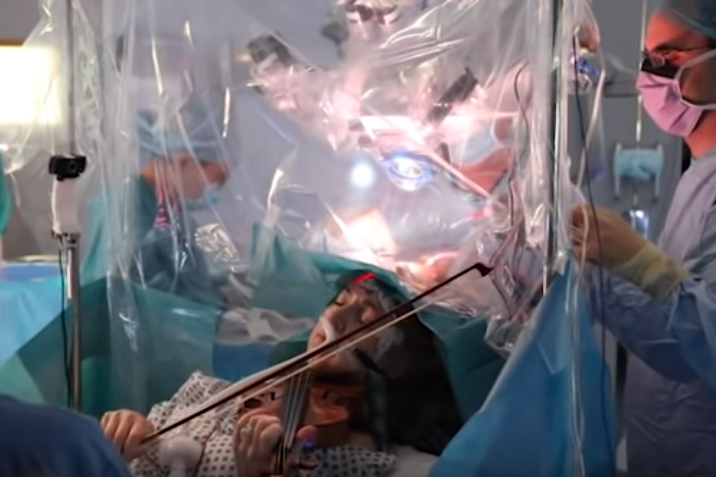 Dagmar Turner, a classically-trained violinist, plays her instrument as she undergoes brain surgery to remove a tumor at King's College Hospital in London.

Most people wouldn't dream of playing an instrument during brain surgery. But if you're a musician hoping to maintain your ability to play, it just might be the thing you need.

Dagmar Turner, a classically-trained violinist, played the string instrument while doctors at King's College Hospital in London operated to remove a tumor located in the right frontal lobe of her brain.

The tumor's location was close to areas of the brain responsible for managing and coordinating fine motor skills of the hand — a necessary skill for a violinist. If those areas were removed or damaged, Turner's talents, among other important skills, could become permanently affected.

It's not uncommon for patients to be awake during brain surgery, also known as awake craniotomies. It can be necessary in order to ensure no important areas of the brain are affected during surgery.

Turner, 53, was diagnosed with a large grade 2 glioma in 2013 and underwent chemotherapy. When doctors recommended to remove it last fall, Turner agreed, but under one condition — she wanted to maintain her violin skills. She approached Dr. Keyoumars Ashkan, a consulting neurosurgeon at King's College, to discuss her options.

Dr. Ashkan and his neurosurgical team came up with a plan to ensure the safe keeping of Turner's ability to play. Prior to the surgery, they spent two hours mapping her brain in order to identify areas that were imperative to playing the violin, as well as language and movement. Turner went under anesthesia for the surgery and was awoken mid-procedure to play the violin as the team carefully removed the tumor.

While playing an instrument during an awake craniotomy is unusual, Turner isn't the first. In 2018, a brain cancer patient played guitar as doctors at the MD Anderson Cancer Center performed surgery.