Payton Gendron, charged in the shooting that killed 10 Black people on Saturday, also shared anti-Semitic beliefs in his document 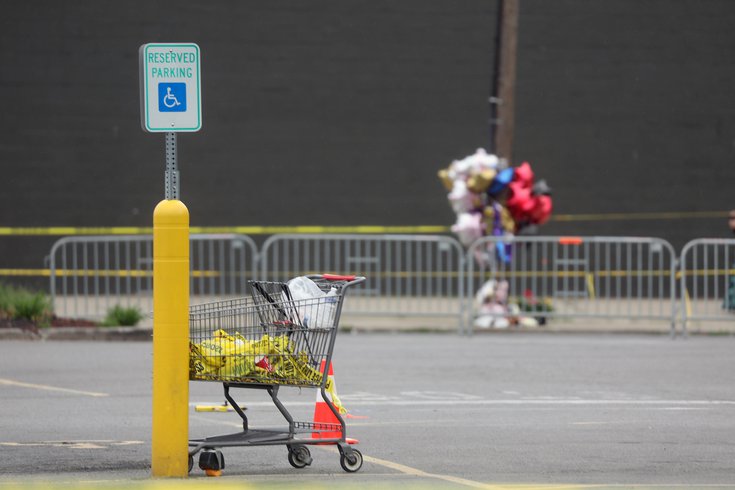 A grocery cart is shown in the parking lot of Tops Friendly Market in Buffalo, New York, where 18-year-old Payton Gendron is charged with killing 10 Black people and wounding three others in a racially motivated attack. Gendron shared a manifesto that also included anti-Semitic beliefs and referenced Orthodox Jewish communities in New Jersey.

The 18-year-old gunman who opened fire at a Buffalo supermarket on Saturday afternoon, killing 10 Black people in a racially motivated rampage, referenced three New Jersey towns in a 180-page manifesto that he disseminated prior to the shooting.

The Hasidic Jewish communities in Lakewood, Toms River and Jersey City were specifically mentioned in gunman Payton Gendron's writings about anti-Semitism, part of a larger document expounding on the alleged racial motivations of the deadly attack.

Lakewood and Toms River are in Ocean County, while Jersey City is in Hudson County. All three communities have growing Orthodox Jewish populations.

"Once we learned of the mention we reached out to our communities," Ocean County Sheriff Michael Mastronardy said Monday, via the Toms River Patch.

There were no specific threats made toward any of the New Jersey communities noted in the manifesto.

Gendron targeted Tops Friendly Market, located in a predominantly Black neighborhood in Buffalo, around 2:30 p.m. on Saturday. Dressed in military gear and armed with an AR-15-style rifle, Gendron wore a tactical helmet equipped with a camera that livestreamed the brutal attack on Twitch.

Police said Gendron, a New York native, began firing in the parking lot of the market and killed three people, including a security guard, before entering the store. He then walked through the aisles searching for Black shoppers to shoot. At one point, Gendron allegedly pointed his gun at a white person hiding behind a checkout counter, only to apologize and move on, the Associated Press reported.

Twitch removed video of the incident within minutes of the recording, but portions of the video continued circulating online in the aftermath of the shooting.

When police confronted Gendron at the scene, he allegedly pointed his rifle at his own neck before surrendering and dropping the weapon. In all, 13 people were wounded or killed in the shooting on Saturday afternoon.

Gendron's manifesto, posted online shortly before the incident, has circulated widely in the days since his attack and paints a picture of a radicalized teen who became a proponent of the Great Replacement Theory. The conspiracy is rooted in the belief that demographic trends are wiping out white populations in a deliberate plot to replace them with immigrants and ethnic minorities.

The same hateful beliefs have been used to justify previous mass shootings in Pittsburgh, San Diego, El Paso and New Zealand. Much like the gunman who targeted Pittsburgh's Tree of Life synagogue in Oct. 2018, killing 11 people and wounding six others, Gendron espoused anti-Semitism and wrote about it in his manifesto.

"I wish all Jews to HELL!" Gendron wrote in a portion of the document shared by The Lakewood Scoop. "Go back to hell where you came from DEMON!"

In another section, Gendron wrote about the Hasidic Jewish communities.

"Indeed, the whole story of Hasidic community growth and its impact on some established neighborhoods has been pretty much ignored by the mainstream press. Hasidic activities in Brooklyn, in Jersey City, in New York exurb Bloomingburg and Lakewood and Toms River, New Jersey are deplorable, and attempts by local communities to fight back are regularly met with claims that the locals are anti-Semites."

Lakewood has been the center of two discrimination lawsuits in recent years. The New Jersey Attorney General's Office alleged that the adjacent community of Jackson Township has used selective local laws to push out Orthodox Jews and limit their religious activities.

Last month, a wave of anti-Semitic attacks occurred in Lakewood and Jackson, where two Hasidic Jews were deliberately hit with cars and a third was attacked and stabbed, according to Ocean County prosecutors. Dion Marsh, 27, of Manchester, has been charged with bias crimes, terrorism and federal hate crimes.

In February, a snow plow driver notably faced a criminal probe after he shared a video on Facebook that showed him casting a wave of snow and ice from his plow onto two Orthodox Jewish men, who were walking along a roadway in Lakewood. The plow driver's employer, Waste Management, fired him after learning of the video, but there have not been any updates on the criminal investigation.

Gendron was arraigned in court on Saturday amid an ongoing investigation into the Buffalo shooting. He pleaded not guilty.

The security guard at Tops Friendly Market has been identified as Aaron Salter, a retired police officer who confronted Gendron and fired his weapon at him. Gendron was wearing body armor and fired back at Salter, killing him outside the store. Buffalo Police Commissioner Joseph Gramaglia said he believes Salter prevented further carnage and loss of life by attempting to stop Gendron.

Investigators believe Gendron had visited the area of the shooting in early March to scout the grocery store. Gramaglia said Gendron likely planned to continue his rampage at other locations in Buffalo on Saturday, before he was apprehended by police.

Erie County District Attorney John J. Flynn told CNN on Sunday that that prosecutors are examining Gendron's manifesto to potentially build a larger case against him.

"We are obviously going through that with a fine-toothed comb and reviewing that for all evidence that may lead us to besides the manifesto itself," Flynn said. "All the evidence that we ascertain from that manifesto, from wherever that manifesto leads us, other pieces of evidence we already had, we can then use that and develop more charges potentially."