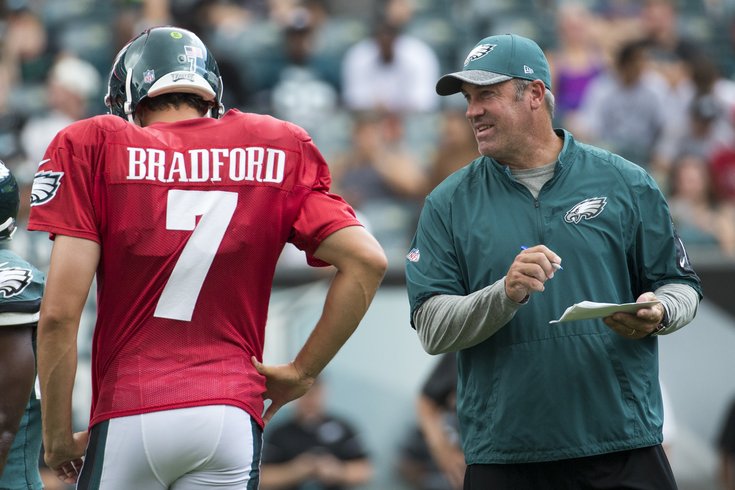 Philadelphia Eagles head coach Doug Pederson, right, talks to quarterback Sam Bradford, who will face his former team for the first time on Sunday after being traded to Minnesota a week before the season.

The next time the Philadelphia Eagles take the field, they’ll be doing so against a quarterback who, less than two months prior, was expected to be on the home sideline when the Minnesota Vikings came to town for their mid-October matchup at the Linc.

Instead, Sam Bradford will be wearing a purple and white uniform and leading the undefeated visiting team out of the tunnel shortly before 1 p.m. — and it shouldn’t just be their defensive line, which leads the NFL in sacks per game, facing an Eagles offensive line without starting right tackle Lane Johnson that causes Eagles coach Doug Pederson to lose some sleep this week.

"He's a sharp kid, a smart kid," Pederson said of Bradford, adding that he's "seeing a lot of the same concepts offensively with them that we did here."

"He's a very accurate thrower. So I'm not surprised [by the Vikings success]. He's got great -- he didn't go to a 1-15 team. He went to a playoff caliber team with a tremendous defense, so that helps as well."

In four starts this season, Bradford has completed over 70 percent of his passes and his 109.8 passer rating is second to only Matt Ryan of the Falcons. He also has six TD passes and is yet to throw an interception on 125 attempts.

After a 3-0 start, Bradford's former team has lost two straight road games in which it was favored. And when asked about the Eagles' obvious regression since they entered the bye week undefeated, the first-year head coach didn’t blame his players as much as he did himself and the rest of the coaching staff.

He also, wisely, gave his opponents some credit.

“I think a little has to do with, number one, there’s more film out there for teams to take a look at you,” Pederson said immediately following his team’s 27-20 loss to Washington. “It comes down to our execution. Again, this goes back to I have to make sure we’re not doing too much offensively. I have to get with [offensive coordinator] Frank Reich and make sure we keep things nice and simple. Basic offense and defense on both sides of the ball, just let our guys play fast. That starts with me and we’ll go back and evaluate that.”

In the Vikings, he’ll have to face a team that not only has two losses to look at on tape, but has also had an extra week to prepare for Carson Wentz and the Eagles offense.

But, especially this week, he also has to worry about Bradford, because the veteran QB may be able to help his defensive teammates just as much as the guys with which he shares the huddle. After all, he spent the entire offseason studying and learning the Eagles playbook.

Pederson, however, doesn’t seem to be concerned by that fact.

On Monday, he shrugged off the notion that Bradford’s familiarity with his system could hurt the offense. In fact, he said he doesn’t care if the opponent has his entire playbook, as long as his players execute — one can’t help but recall Chip Kelly saying similar things almost exactly one year ago.

“One guy has my entire playbook,” Pederson said, presumably talking either in the third person or about Wentz. “One guy.”

And as for whether or not Bradford could meet with Vikings defensive coaches to give them the inside scoop on whatever percentage of the playbook he does know?

“He's got to worry about getting himself ready to play, too,” Pederson added.

"Sam has obviously a good understanding and knowledge of what we do on both sides of the ball. I think where it becomes valuable for a coach ... is just knowing personnel.

Sure, he has a point in that the Eagles offense was about as vanilla as it could be during the preseason, but it’s hard to imagine that Bradford wasn’t privy to the entire thing — after all, he was traded one week before the season opened. Then again, who knows how much Pederson and Reich changed a few things once Wentz was named the starter — and again once they realized that he wouldn’t need much time to transition from the FCS level to the NFL.

If that’s his reasoning, fine. But what you’re about to read, well, it may be a reason for worry.

“We also -- back a few years ago, Donovan [McNabb] was in Washington when we played him and we had a pretty good day,” he said when asked if Bradford’s knowledge of their system would impact how he game-planned for the Vikings. “So listen, I'm not going to change anything. Will we tweak some stuff? Yes. We still have to get ready. This is a great football team coming in here. They are undefeated coming off a bye.

“Sam has obviously a good understanding and knowledge of what we do on both sides of the ball. I think where it becomes valuable for a coach when a player knows you is just knowing personnel. I think just understanding the types of guys that are here. He's been a teammate for a couple years here. I think that becomes more valuable than the Xs and Os. If I know Sam, and I know the quarterback position, he's got to get ready for this defense and get himself ready to go, as well.”

In short, Pederson isn’t worried because: 1. They had success against McNabb after trading him to the Redskins; and 2. Bradford will be too busy getting himself ready to worry about giving some advice to the Vikings defensive staff.

As far as the second reason goes, the Vikings are coming off the bye, so Bradford has had nothing but time. And if I was in his position, I’d make sure I found the time, bye or no bye, to help best prepare my defense for Wentz and the Eagles. After all, the better they’re able to perform, the easier Bradford’s job becomes. Basically, you could consider a convo with defensive coordinator George Edwards as part of Bradford’s preparation. It’s not like the Vikings offense is lighting the world on fire; they’re dead last in total yards, fifth-worst in yards per play and in the bottom half of the league in total* points.

*That number would likely be worse had it not been for their four non-offensive TDs (two by the defense, two by special teams).

But what about that first reason, the one in which he cited the Eagles performance against the McNabb-led Redskins? He’s clearly not remembering that one very well.

Not only did Washington’s defense hold the Birds, who finished the year ranked second and third in the NFL in yards and points, respectively, to a season-low in points during that 17-12 loss — and kept them out of the end zone until late in the fourth quarter — but they also knocked starting quarterback Michael Vick out of the game in the first quarter with a rib injury.

And that was against a Washington team that finished second from last in yards allowed and 11th worst in points against.

This time around, they’ll be facing a much better defense.