Wentz, playing like a seasoned vet, unlike any rookie Pederson's ever seen 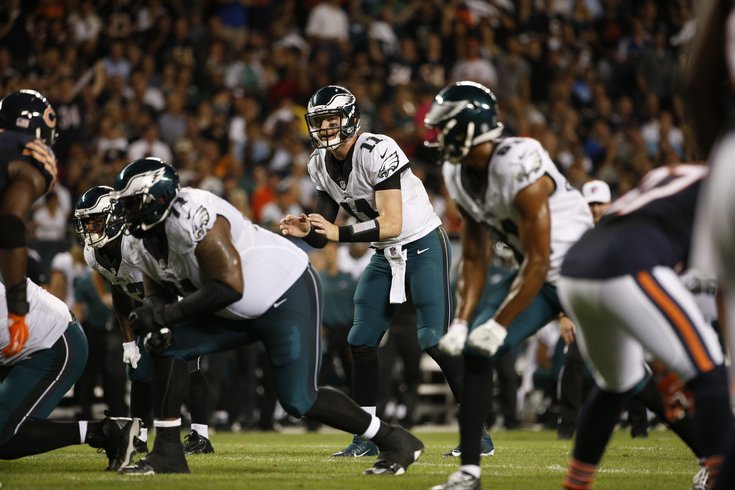 Philadelphia Eagles quarterback Carson Wentz takes a snap during the first half against the Chicago Bears.

Doug Pederson wasn't the greatest NFL quarterback – he'd probably be the first to admit that fact – but he has spent time around some of them throughout his 20 years in the league as a player and coach. Guys like Brett Favre. Dan Marino. We can even throw in Donovan McNabb.

He's also been around some less spectacular players, like Tim Couch and Scott Mitchell. And those in between, like Alex Smith. Essentially, he's seen it all.

That is, of course, until he came in contact with Eagles rookie Carson Wentz, who on Monday night became the first rookie QB since the merger to start a season 2-0 without throwing an interception. In the North Dakota State product, Pederson is seeing the kind of intelligence and poise he would expect from a veteran.

Instead, it's coming from a 24-year-old who prior to taking the field against the Browns had just 39 preseason snaps on his NFL résumé. And that's something the coach hasn't seen before from a rookie.

"Not at the quarterback position," Pederson said Tuesday. "Not at the quarterback position. I had Alex [Smith] in Kansas City. You know, seven-, eight-, nine-year guy at the time. He was that way. Of course, in Green Bay, there were more veteran guys, but this is what I'm seeing out of Carson right now on the sideline. And he and I are dialoguing on the sideline. He's constantly with [offensive coordinator Frank Reich] and with the guys. He's constantly playing the game in his mind, and that's what's given him, I think, an edge when he goes back out on the field, just understanding situations."

So far, those conversations have paid off to the tune of three touchdowns, no interceptions and a 94.1 passer rating, which is tied for 14th best in the NFL with Colts QB Andrew Luck. But for Pederson, it's not the in-game talks that are leading to the rookie's success, but rather it's the fact that they're happening in the first place – they're representative of Wentz's overall maturity level – that suggests there's something greater at work.

"Number one, it's the fact that he's having [these conversations]," he added. "You know, you don't see that all the time. And number two is the depth and just the actual game plan specific things that he's seeing out there on the field. What he's hearing out on the field and coming to us and recommending. He's asking me all the time, what are you thinking on the next series? What are you thinking on the next series? So I give him two or three passes, a run or two in there. And things that we're seeing. At the same time, you know, I want to know what he's thinking because he's the one playing the game."

Because of that, you might think that he would ease Wentz in, maybe limit the playbook slightly to help his quarterback feel more comfortable after having just eight days to prepare for his first NFL start. But that's not what we've seen on the field. Far from it.

When the Eagles offense is on the field, there's no question who is running the show. It's Carson Wentz. And not only has he shown the mental acuity you'd expect out of a veteran, but he's got the arm to make every throw (even if they're occasionally dropped).

"Well, number one, yeah, he's got the length," Pederson said when asked to evaluate Wentz's arm strength. "He's got the long arm kind of wind up that generates a lot of energy, a great lower body. He's got the mechanics and the tools to throw the ball extremely hard. You know, the times that he really sets his feet and steps into his throws, he can really drive the ball to anywhere on the football field. You saw one last night with him on the run. That deep ball to Nelson on the run. I mean, those are just some of the things that he can do because of his size."

When you combine those two things -- the brains and the brawn -- you begin to see why the offensive coaches didn't feel the need to dial things down for their rookie.

"For me and the offensive staff, it's not anything when you start looking at putting gameplans together," he added. "We don't shy away from any throw because he has the ability to [make them all]."

This weekend, Wentz will likely face his toughest test so far when the Steelers come to town.

It will also likely be the defense's toughest as well. They'll have to deal with speedy wideout Antonio Brown and veteran quarterback Ben Roethlisberger, a guy who Wentz has been compared to recently. Does Pederson see the similarities?

"So, yeah, there are a lot of similarities there. The fact that they're both very good throwers outside the pocket is a tribute to both of them."

On Sunday, they'll square off for the first time. By Monday, only one will remain undefeated.