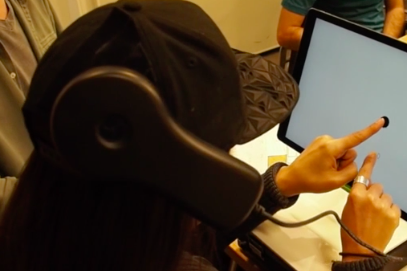 A study led by an incoming neuroscientist at Penn Medicine enabled people with blindness to see shapes by using implanted electrodes to deliver visual information directly to the visual cortex, bypassing the eyes.

Researchers have found a way to bypass damaged eyes and deliver visual information directly to the brain, enabling people who are blind to recognize shapes and letters.

Dr. Daniel Yoshor, the incoming chair of neurosurgery at Penn Medicine, led a research team that used implanted electrodes to deliver visual forms from a camera to the visual cortex, the portion of the brain that processes visual information from the eyes.

Yoshor led the research while at Baylor College of Medicine in Houston. The team's findings are being published in an upcoming edition of the journal Cell.

“When we used electrical stimulation to dynamically trace letters directly on patients’ brains, they were able to ‘see’ the intended letter shapes and could correctly identify different letters,” Yoshor said. “They described seeing glowing spots or lines forming the letters, like skywriting.”

The researchers' method works by stimulating the implanted electrodes in a dynamic sequence that "traces" shapes on the surface of the visual cortex.

Past attempts to stimulate the visual cortex have tried to treat each electrode as a pixel in a visual display, stimulating many of them at once. While participants in these studies could detect spots of light, they were not able to identify visual objects and forms.

In the Baylor study, the investigators stimulated multiple electrodes in sequences, enabling the study participants to perceive shapes and correctly identify them as letters.

“Rather than trying to build shapes from multiple spots of light, we traced outlines,” said researcher Michael Beauchamp, of Baylor. “Our inspiration for this was the idea of tracing a letter in the palm of someone’s hand.” 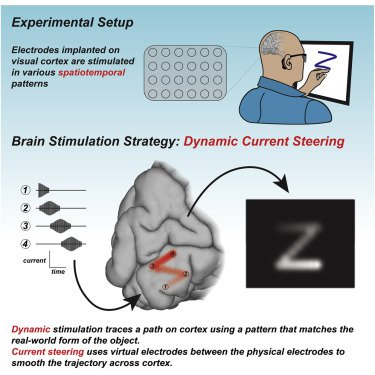 Source/Cell
Further development of this method could allow people with blindness to detect and recognize visual forms using technology that directly inputs visual information to the brain, if they choose to use it. The application would have to be designed on a larger scale.


“The primary visual cortex, where the electrodes were implanted, contains half a billion neurons," Beauchamp said. "In this study we stimulated only a small fraction of these neurons with a handful of electrodes. An important next step will be to work with neuroengineers to develop electrode arrays with thousands of electrodes, allowing us to stimulate more precisely. Together with new hardware, improved stimulation algorithms will help realize the dream of delivering useful visual information to blind people.”

Yoshor, a nationally recognized neuroscientist and neurosurgeon, was appointed chair of the department of neurosurgery at Penn's Perelman School of Medicine in March. As a clinical neurosurgeon, Yoshor focuses on endoscopic pituitary and skull base surgery, as well as brain tumor and epilepsy surgery. His scientific research focuses on mechanisms of sensory processing in human visual cortex.