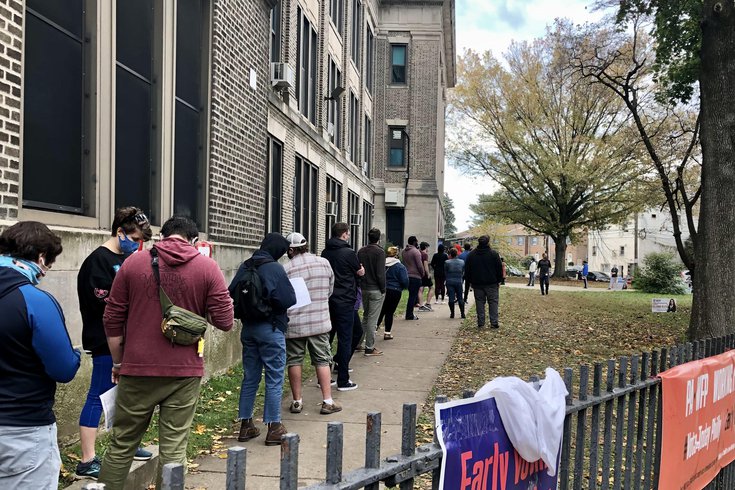 Pennsylvania's young voters are behind other age groups in completing and returning mail-in ballots for the 2020 election, according to the U.S. Elections Project. The photo above shows Philadelphia's early voting location at Roxborough High School on Tuesday afternoon, which was the last day to request mail-in ballots. The line of voters stretched for blocks outside the building.

New data from the U.S. Elections Project indicate that Pennsylvania voters between 18-24 years old are lagging behind in returning their mail-in ballots with one week left before the Nov. 3 election.

The U.S. Elections Project, based out of the University of Florida, collects information from the Pennsylvania Department of State on requested ballots and returned mail-in ballots. The information is broken down by party identification, county and age demographic.

The findings suggest — as expected — that these numbers are predominantly represented by Democratic voters, who had requested 1,906,636 mail-in ballots compared to 761,811 requested by Republican voters. Those affiliated with minor parties requested 24,561 mail-in ballots and voters with no party affiliation requested 325,346 mail-in ballots.

The deadline to request mail-in ballots in Pennsylvania is today.

But the low rate of returned ballots among younger voters is cause for concern among Democrats, as Pennsylvania currently cannot begin tallying mail-in ballots until Election Day. It's one of just four states that will not permit any pre-canvassing of ballots.

The Washington Post Editorial Board highlighted the dangers of this scenario in a pivotal battleground state:

Pennsylvania’s Republican-majority legislature has failed to give the state’s election officials even three days (to pre-canvass), holding out for concessions on other voting procedures from Gov. Tom Wolf (D), who favors pre-processing. The election is next week. There is no more time for this gamesmanship. Republican lawmakers should not insist on getting something in return for doing the right thing. Instead of continuing to worry about what concessions they can extract, they should be terrified that their state will become a laughingstock — or, worse, the central battleground in a scorched-earth post-election war.

The U.S. Supreme Court affirmed a ruling last week that ensures a three-day extension for Pennsylvania vote-by-mail ballots submitted for the general election to arrive at county offices and be counted.

Mail-in and absentee ballots have to be received by election officials by 5 p.m. on Friday, Nov. 6 to be counted. However, any ballots that are mailed must be postmarked by 8 p.m. on Nov. 3 to be valid.

At a rally in Northampton County on Monday, President Donald Trump railed against Wolf and again repeated doubts about the integrity of the election in Philadelphia.

A spokesperson for Wolf called the president's insinuation "an insult to the thousands of state and county employees across Pennsylvania who are diligently preparing for an efficient and accurate vote count."