'Difficult questions must be answered' as shooting investigation gets underway, Mayor Kenney says 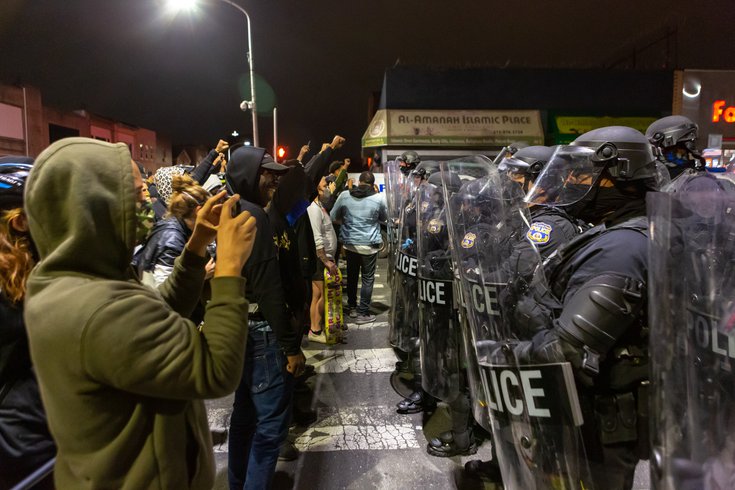 Philadelphia police officers stand in a line at 52nd and Chestnut streets during demonstrations Tuesday, Oct. 27, 2020, following the death of Walter Wallace Jr, who was shot by police a day earlier.

The protests mostly occurred near the 18th District police precinct at 55th and Pine streets and along the 52nd Street commercial corridor. More than 30 people were arrested and 30 officers were injured, according to 6ABC.

The victim, 27-year-old Walter Wallace Jr., was armed with a knife at the scene, according to the Inquirer. Wallace was ordered by police to drop the weapon, but he did not and advanced toward the cops.

A video of the incident can be seen below. Two police officers are pointing their guns at Wallace as he confronts them in the street. The video cuts away as the gunshots are fired.

This can’t be reformed.

Another black man was murdered by the police today. His name is Walter Wallace Jr, 27. He was shot by Philly police. He struggled with mental health problems. His mother witnessed this. pic.twitter.com/T2kJHEOFRv

Wallace was taken to Penn Presbyterian Medical Center, where he died. His father, Walter Wallace Sr., told the Inquirer that he believed his son was shot 10 times by police.

Mayor Jim Kenney and Police Commissioner Danielle Outlaw released statements Monday night saying the shooting is under investigation. They both are expected to meet with the victim's family and community members.

"My prayers are with the family and friends of Walter Wallace," Kenney said. "I have watched the video of this tragic incident and it presents difficult questions that must be answered. I spoke tonight with Mr. Wallace’s family, and will continue to reach out to hear their concerns first-hand, and to answer their questions to the extent that I am able.

"I look forward to a speedy and transparent resolution for the sake of Mr. Wallace, his family, the officers and for Philadelphia."

Hundreds of demonstrators took to the streets in protest.

An officer was hospitalized after being struck by a pickup truck at 52nd and Walnut streets around 12:45 a.m. She reportedly sustained a broken leg.

Cops armed with riot gear, including shields and batons, attempted to disperse the crowd as the situation worsened. Police began blocking off streets to curtail the protests.

Most demonstrators left the area by the early morning hours on Tuesday.

with a group of dozens still in west Philly, about a block from precinct. Police with shields pushed back crowds as ppl threw bottles pic.twitter.com/wRMEBUGNri


Traffic cones, water bottles, fireworks being thrown toward a line of police with riot gear as they push down Pine Street in West Philly. pic.twitter.com/IuU2S5cgQc


#Philadelphia
Demonstrators fight with Philly PD officers as they move in to push the crowd away from the 18th Precinct.

Officers are requesting a megaphone and are preparing to make a second round of arrests.

Outlaw acknowledged the video of the shooting "raises many questions," that must be addressed by an investigation.

"While at the scene this evening, I heard and felt the anger of the community," Outlaw said. "Everyone involved will forever be impacted. I will be leaning on what the investigation gleans to answer the many unanswered questions that exist."

"We intend to go where the facts and law lead us and to do so carefully, without rushing to judgment and without bias of any kind," Krasner said. "In the hours and days following this shooting, we ask Philadelphians to come together to uphold people’s freedom to express themselves peacefully and to reject violence of any kind."