Lawsuit claims use of religious symbol is unconstitutional

A federal lawsuit has been filed against Lehigh County over its use of a Christian symbol in its seal.

The Freedom From Religion Foundation announced earlier this week that it's suing the county on behalf of four residents who say featuring the Latin cross on county documents, government buildings and websites is unconstitutional. 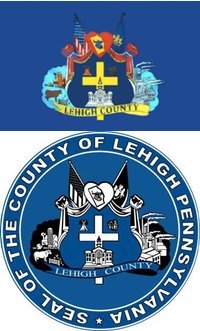 Pictured is the Lehigh County flag (top) and seal (bottom).

“Lehigh County is not a Christian county, it should be equally welcoming to all its citizens regardless of their religion or their reject (sic) of religion," FFRF Co-President Annie Laurie Gaylor said in a statement.

The FFRA said they complained to the county about the seal back in 2014 and again in January 2015, and officials eventually responded by saying the seal includes "more than a dozen" elements and that the cross honors the county's Christian settlers.

But the lawsuit contends that many residents don't view the cross, which is also featured on the county flag, as a tribute to the county's founders.

The suit cites responses the Board of Commissioners received in 2015 when it was putting the seal up for consideration.

“Please do not allow this group of haters to bully you into removing something that stands for freedom," resident Pamela Woods wrote to the board, according to the suit. "The Cross stands for freedom. Jesus Christ came to give freedom. The God haters of this world are taking those freedoms away.”

Lehigh County Solicitor Matthew Sorrentino told Lehigh Valley Live that he had looked at the complaint but wouldn't comment on the pending litigation.

The lawsuit says the four plaintiffs, including one atheist, find the seal offensive and seeks a declaration that the flag is unconstitutional, a permanent injunction to stop the county from using the seal or flag with the cross and nominal damages for the plaintiffs for having their rights violated.

Recent precedent would suggest the lawsuit has a chance. In April, a federal court ruled that the use of a Christian cross in the Los Angeles County seal was unconstitutional.

U.S. District Judge Christina A. Snyder ruled that including the cross "places the county’s power, prestige, and purse behind a single religion."