When was the last time you saw vendors wearing gloves? 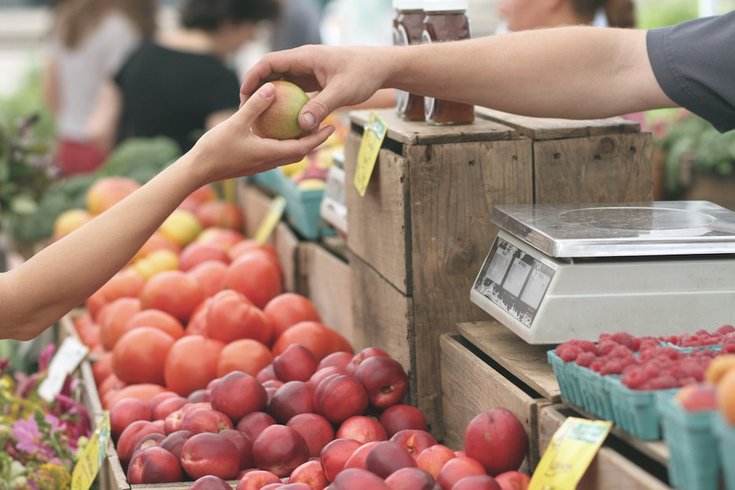 A study found that food safety practices are not up to par at farmers' markets here in Pennsylvania.

Farmers markets are awesome — you get farm-fresh foods without grocery store prices. Plus, they oftentimes pop up in neighborhoods all over Philly, making their convenience an added bonus. It’s a win-win, really.

But what’s one major thing that you don’t see at pop-up farmers markets? Sinks. Meaning, there’s not a whole lot of hand-washing going on between handling cash and vegetables. And we don’t even want to think about farmers markets that sell meat.

A new Penn State University study suggested this is just one of the many risky food safety practices going on at Pennsylvania farmers markets. This five-year study determined that “many vendors at farmers markets take inadequate precautions to prevent the spread of food-borne illnesses, and they should be trained to reduce food-safety risks,” researchers reported.

"The vendors think they are doing a good job, when in reality they are not."
– Cathy Cutter, Penn State professor

To compile their data, researchers assessed food safety practices at state farmers markets by using "direct concealed observations, state sanitarian observations, and self-reported vendor surveys.” The results revealed noteworthy differences between observed vendor food-handling practices — which were seen by by both researchers and state sanitarians — and self-reported practices by the vendors.

"The vendors think they are doing a good job, when in reality they are not. We are not sure why there were such discrepancies. Nevertheless, they need to do better," said Cathy Cutter, professor of food science in the Penn State College of Agricultural Sciences, whose research group conducted the study.

These findings led researchers to believe that a customized food-safety training program offered to farmers market vendors, identifying issues and regulatory requirements for safely selling food, would be an efficient way to nip these issues in the bud.

The specific areas where farmers market vendors are falling short in include: hand washing, personal hygiene and cross-contamination. The use of disposable gloves was another point of concern — less than 24 percent of vendors even had them present at their booths, despite the fact that they were selling and handling ready-to-eat foods, including meat and seafood.

In addition to observing vendor’s practices, researchers examined select samples of leafy green produce and meat obtained from farmers markets in Pennsylvania for things like coliforms, fecal coliforms, Listeria, and E. coli. They discovered both E. coli and Listeria in a concerning number of samples.

While this information definitely is alarming for loyal farmers market shoppers, researchers intend to use this information to improve the operation of agriculture-related business and keep consumers healthy, happy and safe.