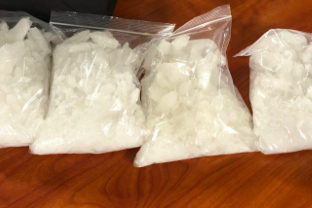 A grand jury investigation uncovered evidence of a meth ring that distributed drugs from Philadelphia to towns in Blair County, Pennsylvania, authorities said. Thirty-two people are facing charges in the bust.

Thirty-two people have been arrested following an investigation into a crystal methamphetamine ring that allegedly trafficked the drug between Philadelphia and Blair County, Pennsylvania, Attorney General Josh Shapiro said.

In an investigation dubbed Operation Ice Breaker, law enforcement officials used wiretaps and a confidential informant to track the distribution and sale of meth in Pennsylvania from mid-2018 through October 2019.

A year-long investigating grand jury found evidence of a network that moved drugs between Philadelphia and Blair County, located about 230 miles west.

The findings of the investigation were presented this week, detailing specific dates of purchase, amounts and interactions between those allegedly involved in the drug ring.

The grand jury determined that similar-sized deliveries occurred every 7 to 10 days. In one year, the meth ring trafficked well over 94,000 doses worth approximately $2,500,000.

"Blair County and much of rural Pennsylvania is suffering under the drug crisis being fueled by organizations like those taken down today," Shapiro said. "These individuals sold thousands of dollars in addictive, life-altering drugs, sometimes in the presence of children. They did not consider how their actions would ravage the lives of their loved ones, their neighborhoods, communities like Altoona, Hollidaysburg, and East Freedom, and families all across Pennsylvania."

The grand jury investigation findings resulted in arrest of 17 individuals including the Philadelphia suppliers and the upper- and mid-level dealers in Blair County. An additional 15 people were arrested for alleged connections to the larger drug organization.

Charges against the defendants are pending.