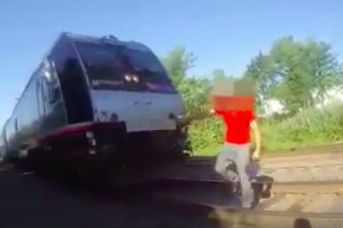 A Perth Amboy police officer rushed to rescue a man from an oncoming NJ Transit train on Thursday, July 19. The incident was captured on Officer Kyle Savoia's body camera.

A New Jersey police officer is being celebrated for his heroism after a body cam video showed him sprinting to the aid of a man who lay motionless on a set of railroad tracks.

Authorities in Perth Amboy, Middlesex County, released the video on Facebook on Tuesday afternoon. The incident occurred last Thursday morning, July 19, when Officer Kyle Savoia was dispatched to the tracks for a welfare check, according to NJ.com.

When Savoia arrived at the tracks, a bystander told him there was a distressed man on the tracks. An approaching train was reportedly barreling ahead – full speed – less than 600 feet away. That's when Savoia took off toward the train.

As Savoia approached the train, he waved it off to slow down and urged the man to move from the tracks. The shocked man profusely thanks Savoia and asks him where he came from.

Authorities said the man was taken to a nearby hospital for evaluation.

"As police officers, our job is to make quick decisions in difficult situations and to act on them," said Savoia, who was sworn in to the Perth Amboy Police Department in January.

"At the end of the day, all that matters is everyone gets home safe."