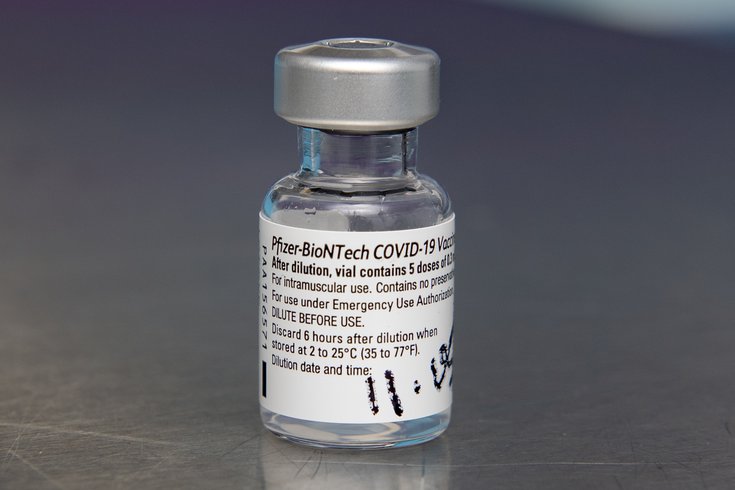 The FDA has authorized Pfizer's COVID-19 vaccine, kicking off a massive effort to inoculate millions of Americans against the coronavirus. Above, a vial of the vaccine in Sheffield, United Kingdom.

Health care workers on the front line of the coronavirus pandemic will soon get a shot in the arm.

In due time, so will millions of Americans.

The U.S. Food and Drug Administration authorized Pfizer's COVID-19 vaccine on Friday, paving the way for a massive, months-long rollout that may finally halt the disastrous health and economic effects of the public health crisis.

A statement released by the FDA said the "totality of evidence provides clear data" that the vaccine, developed with BioNTech, "may be effective at preventing the coronavirus."

"The data also support that the known and potential benefits outweigh the known and potential risks, supporting the vaccine’s use in millions of people 16 years of age and older, including healthy individuals," the statement said. "In making this determination, the FDA can assure the public and medical community that it has conducted a thorough evaluation of the available safety, effectiveness and manufacturing quality information."

The first 6.4 million doses of the two-shot vaccine are expected to be distributed within 24 hours. Pfizer has committed to providing the U.S. with 100 million doses in the months to come, enough to fully vaccinate 50 million people.

Multiple COVID-19 vaccines likely will be needed to bring the coronavirus under control due to production limitations. The sheer volume of need is unprecedented, health experts say.

Pfizer will not be able to supply the U.S. with substantial additional doses until next summer because other countries have bought up most of its supply. But multiple other vaccines are in various stages of the testing and authorization processes.

The FDA also soon will decide whether to approve emergency use authorization for Moderna's COVID-19 vaccine. If authorized, Pfizer and Moderna have enough doses to vaccinate 20 million people by the end of the year.

The U.S. Centers for Disease Control and Prevention has recommended the country's 21 million health care workers and three million nursing home residents be first in line to receive a vaccine, given their vulnerability to the coronavirus. But states ultimately will decide how to distribute their allotments.

Pfizer's vaccine was found to be 95% effective during a clinical trial involving more than 43,000 volunteers. An initial FDA review confirmed it as being safe and highly effective and an independent advisory panel offered its endorsement.

One day later, the FDA authorized it.

"Today's action follows an open and transparent review process that included input from independent scientific and public health experts and a thorough evaluation by the agency's career scientists to ensure this vaccine met FDA's rigorous, scientific standards for safety, effectiveness, and manufacturing quality needed to support emergency use authorization. The tireless work to develop a new vaccine to prevent this novel, serious and life-threatening disease in an expedited timeframe after its emergence is a true testament to scientific innovation and public-private collaboration worldwide."

Though the authorization marks a turning point in the pandemic, a return to normalcy is not imminent. Social distancing, mask-wearing and various restrictions will remain necessary until much of the population is vaccinated, health officials say.

"Bluntly stated, we'll get out of this pandemic faster if we give the vaccine less work to do," A. David Paltiel, a professor at the Yale School of Public Health, told The New York Times earlier this week.

The Times likened the vaccine to a fire hose – it's a major tool against destruction. But the size of the fire is the bigger determinant. And right now, the U.S. is like a wildfire.

According to a study cited by the Times:

• At the current level of infection in the U.S. (about 200,000 confirmed new infections per day), a vaccine that is 95 percent effective — distributed at the expected pace — would still leave a terrible toll in the six months after it was introduced. Almost 10 million or so Americans would contract the virus, and more than 160,000 would die.

• This is far worse than the toll in an alternate universe in which the vaccine was only 50 percent effective but the U.S. had reduced the infection rate to its level in early September (about 35,000 new daily cases). In that scenario, the death toll in the next six months would be kept to about 60,000.

Millions of Americans have lost their jobs and filed for unemployment benefits because of the pandemic and untold numbers of businesses have shuttered forever.

The success of the vaccine – or vaccines – will be dependent not only on its effectiveness, but also the public's willingness to receive it. A Gallup poll last month found that 58% of Americans would get vaccinated, an increase from 50% in September.

A national campaign is expected to be launched to boost public confidence and refute vaccine misinformation. Critically, Facebook has pledged to remove false claims about COVID-19 vaccines.

The FDA grants emergency use authorizations when there are not any adequate, approved and available alternatives. They allow treatments and vaccines to be made available during the emergency without FDA approval, a licensing process, if they demonstrate a favorable benefit-risk assessment.

"Efforts to speed vaccine development have not sacrificed scientific standards or the integrity of our vaccine evaluation process," he said in a statement.

On Tuesday, the Mayo Clinic posted a story debunking common misconceptions about COVID-19 vaccines. Chief among them: that they are not safe because they were developed, tested and authorized so quickly.

"Many pharmaceutical companies have invested signifiant resources into developing COVID-19 vaccines quickly because of the worldwide effects of the pandemic," the Mayo Clinic wrote. "This emergency situation warranted an emergency response. That does not mean the companies bypassed safety protocols or performed inadequate testing."

Pfizer's vaccine did not cause any serious reactions among the 37,000-plus participants who have been tracked for two months after receiving their second dose, according to the FDA's initial review. That's when most vaccinations issues tend to appear, the agency said.

The vaccine's primary side effects are injection-site pain and flu-like symptoms, which tend to last up to two days. They occur most frequently after the second dose.

More than half of adults under the age of 55 experienced fatigue or headaches during the clinical trial. About one-third had chills and muscle pain and 16% developed a fever. Older adults were less likely to experience those side effects.

The Pfizer vaccine contains a small piece of the coronavirus's mRNA that instruct cells to make its distinctive spike protein.

"When a person receives this vaccine, their body produces copies of the spike protein, which does not cause disease, but triggers the immune system to learn to react defensively, producing an immune response against SARS-CoV-2," the FDA said.

During Pfizer's trial, 170 volunteers contracted COVID-19, but only eight of them received the vaccine. The others received a placebo. Still, it remains unclear how long the vaccine will offer immunity, or whether booster shots eventually will be needed.

"We're looking at the best possible data," Dr. Paul Offit, an FDA adviser and an immunology expert at the Children's Hospital of Philadelphia recently told the Associated Press. "People worry, reasonably, how about six months later?"

Distributing the vaccine will bring its own challenges. Pfizer's vaccine must be kept at -94 degrees Fahrenheit, a temperature that requires specialized freezers for storage and lots of dry ice for shipping.

Many hospitals have ultra-cold freezers, but they often use them for other medical purposes, meaning they'll need more storage space, Vox reported. The companies that manufacture such freezers have been preparing for a surge in demand for months.

Still, Alex Esmon, of Thermo Fisher Scientific, which makes ultra-cold freezers, told Vox that a major undertaking may not be necessary for many health systems. Thousands of doses can be kept in a relatively small freezer, allowing hospitals to adjust their needs based on the number of people they anticipate inoculating at one time, he said.

"It doesn't necessarily require a huge-build-out," Esmon said. "It requires the right build-out based on what each clinic and hospital system determines is going to be their need."

Many states reportedly have struggled to prepare for an unprecedented rollout that will require enhanced staffing, an array of infrastructure needs and plenty of funding. They have developed plans without a known launch date and received frequently changing information – including the amount of doses a state initially will receive.

"We heard various numbers, but we don't know exactly how many doses we're going to be getting, which again is why all of our plans are drafts and will continue to evolve, because it will be different depending on the doses we get," Pennsylvania Health Secretary Dr. Rachel Levine told USA Today.

Administering the vaccine will not be a quick process, though states anticipate different endpoints. New Jersey Gov. Phil Murphy wants to inoculate 70% of the state's adult population within six months. In Pennsylvania, Levine expects it to take longer.

"We're going to be rolling the vaccine out through the winter, spring and well into the summer," Levine said. "It's going to take a significant amount of time to vaccinate everyone in Pennsylvania."