Pfizer to seek FDA authorization for COVID-19 vaccine 'within days' 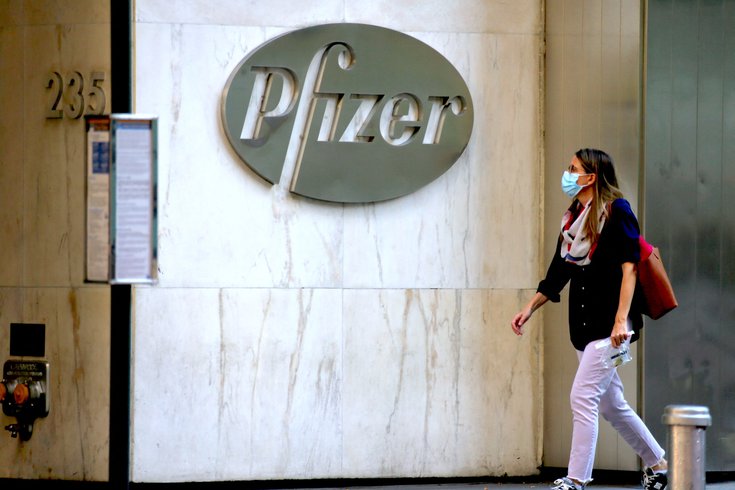 Pfizer expects to produce 50 million doses of its COVID-19 vaccine this year and another 1.3 billion next year. The drugmaker is ready to seek authorization from the FDA.

Pfizer's COVID-19 vaccine candidate is 95% effective against the coronavirus, the U.S. drugmaker announced Wednesday morning, providing a bit of hope as the United States appears headed for more lockdowns.

A final efficacy analysis showed the two-dose vaccine, called BNT162b2, was highly effective 28 days after the first dose and was consistent across all ages, races and ethnicities. The effectiveness for adults over 65 was 94%.

Pfizer and BioNTech, a German company that helped develop the vaccine, have concluded their Phase 3 clinical trial. The companies said they plan to submit an application for emergency use authorization to the U.S. Food and Drug administration "within days."

"The study results mark an important step in this historic eight-month journey to bring forward a vaccine capable of helping to end this devastating pandemic," Pfizer CEO Dr. Abert Bourla said in a statement. "We continue to move at the speed of science to compile all the data collected thus far and share with regulators around the world."

This news comes amid a rapid surge of COVID-19 cases that has prompted many states and cities to enact sweeping new restrictions. Beginning Friday, Philadelphia will ban indoor dining, close some entertainment venues and restrict public gatherings.

"The months ahead are going to look better than the weeks ahead," McClellan said Tuesday at an event hosted by Duke University. "Won't be past this for still months to come. But it will start getting better by early 2021."

Pfizer and BioNTech also said there were no serious safety concerns uncovered during the clinical trial, noting most adverse events resolved shortly after vaccination.

The vaccine also appeared to prevent severe COVID-19 cases. Of the 10 participants who developed a severe illness, nine were in the placebo group. The trial enrolled 43,661 people worldwide.

Overall, there were 170 confirmed coronavirus infections, but the vast majority were from the placebo group. Only eight people who received the vaccine developed COVID-19.

It remains unclear how long the vaccine provides immunity, or whether booster shots will be needed periodically.

Earlier this month, Moderna released its preliminary findings that showed its COVID-19 vaccine was 94.5%. The company also expects to apply for emergency use authorization later this year.

If both vaccines are authorized, there could be two vaccines in place by early next year. The vaccines each use messenger RNA technology — a new approach that uses genetic material to trigger immune antibodies and create proteins that ward off infections.

"These vaccines are going to be approved and then rolled out with basically a few months' worth of data," Dr. Paul Offit, director of the Vaccine Education Center at the Children's Hospital of Philadelphia, told NBC10. "You're not going to do a two-year study to see whether it's effective for two years with more than 200,000 people dying this year" in the U.S.

Pfizer and BioNTech expect to produce 50 million doses this year and up to 1.3 billion in 2021. The vaccine requires a storage temperature of -94 degrees Fahrenheit.

Moderna's vaccine can be stored in a refrigerator for up to a month or stored for up to six months at -4 degrees.