Dalessandro's Steaks ATM among several blown up in Philly 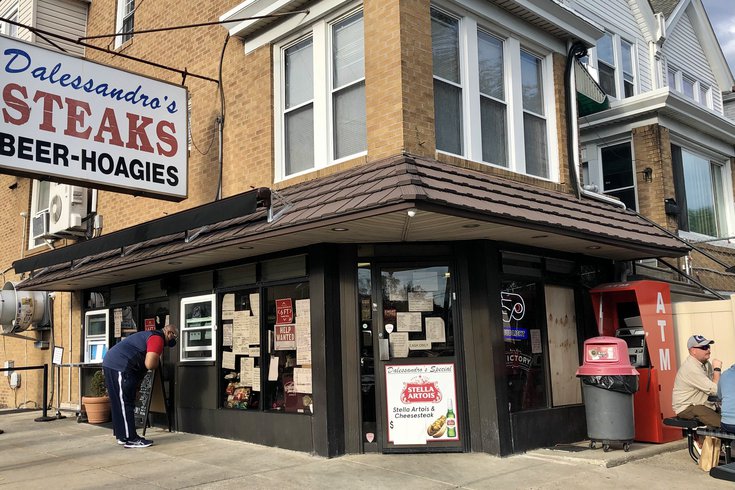 The ATM outside Dalessandro's Steaks, at Henry Avenue and Wendover Street in Roxborough, was one of several around Philly damaged by explosives overnight Monday into Tuesday. The restaurant's ATM is shown on the right of the image above. The blast also broke one of the restaurant's windows, which was still boarded Tuesday afternoon. Dalessandro's remained open for business.

Philadelphia police are investigating a series of ATM explosions that took place overnight.

An ATM located outside of Dalessandro’s Steaks on the 600 block of Wendover Street in Roxborough exploded around 11:50 p.m. Monday.

An ATM located outside of Royal Pizza on the 4200 block of Baltimore Avenue was blown up shortly after 1 a.m. Tuesday. Another machine, outside of the Fresh Grocer on the 5600 block of Chestnut Street, exploded around 2:30 a.m.

Police are also investigating ATM explosions that occurred overnight at SEPTA's Germantown and Chestnut Hill West stations, according to reports by CBS3 and FOX29.

No arrests have been made and no injuries were reported. Bomb squad officials were notified of the incidents and are participating in the investigation. Police have not said whether any cash was taken.

The blasts followed an ATM explosion early Monday morning outside Sammy's Sports Bar at 50th and Market Streets. There, someone retrieved the cash box.

Late last spring, police responded to more than 100 explosions, including about 50 targeting ATMS, amid the civil unrest sparked by the police killing of George Floyd. Police said most of the machines were opened by people who used illegal M100 to M250 devices.