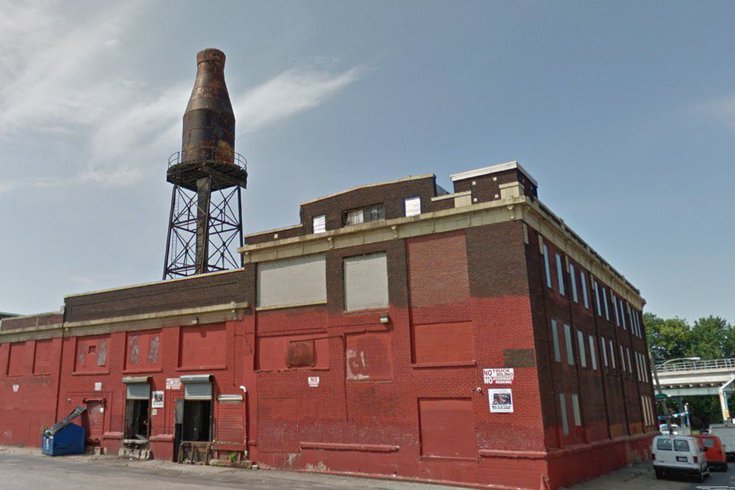 The Harbison's Dairy milk bottle, a large water tower, has been dubbed the 'Eiffel Tower of Kensington.' The iconic structure has been repainted to reflect its historic look.

The Harbison's Dairy milk bottle, an iconic Kensington landmark, has a new look.

The 106-year-old water tower has been repainted white with bold red lettering, taking on its historic look. The refurbished milk bottle, located atop the former dairy plant, is clearly visible from I-95 and the nearby Market-Frankford Line.

Harbison's opened in 1865, producing dairy decades before refrigerators became a common household item. It began closing and selling off its infrastructure in the 1960s.

Friends of the Boyd, a group of preservationists advocating to save the Boyd movie palace, posted a photo of the new-look tower to its Facebook page Thursday.

The preservation group praised Oscar Beisert, leader of the Keeping Society of Philadelphia, who played a large role in getting the tower registered as a local landmark.

Beisert has called the milk bottle the "Eiffel Tower of Kensington" for its recognizability and significance to the neighborhood.

Developers are converting the former dairy plant into a collection of boutique apartments that will maintain the Harbison's name. The milk bottle will remain atop the renovated structure.

"Our vision is to create a place where residents and neighbors alike can find culture and community, all while recognizing the soul and spirit that has made this building so beloved," the developers wrote on the complex's website. "Harbison's Dairy is a home base for those who want more than a place to live, but a place that brings new life."

The website includes a video of the newly painted Milk Bottle, which appears to have been painted within the last two months.

The Philadelphia Historical Commission deemed the milk bottle – and four buildings that were part of the plant – an historic landmark in 2018. The designation preserves structures considered significant to the city's history.

In January, a state-funded restoration project awarded Perrystead Dairy, a Pennsylvania cheesemaker, about $126,000 to install a creamery in the Haribson's plant. However, a lease agreement stalled with the developers.

Perrystead still intends to bring a creamery to the Kensington neighborhood.