What will happen to the Gayborhood mural honoring LGBT activist Gloria Casarez?

The 12th Street Gym building was sold years ago, now for the first time the developer says it wants to preserve the memory of the community icon 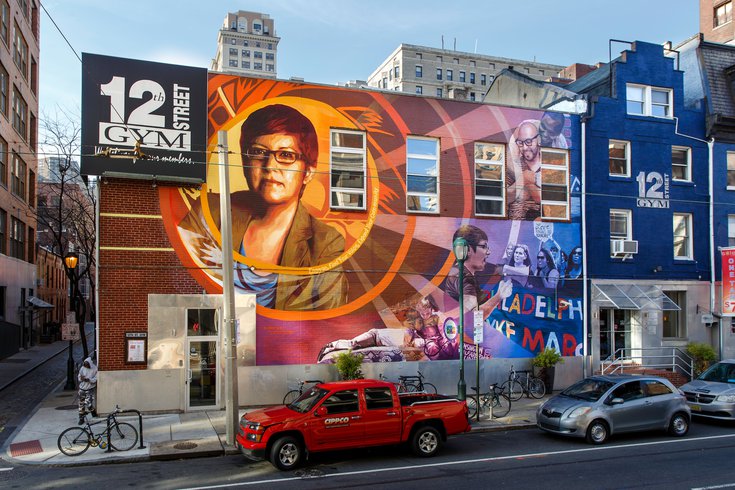 The mural of Gloria Casarez, an LGBT activist, on the front of the former 12th Street Gym in the Gayborhood has faced an uncertain future for years since the gym closed and the building was sold. Now the developer of the property said there are plans to honor Casarez at the site in the future.

When it was announced that the site of the 12th Street Gym had been sold to a New York City developer, not only was the community shocked to see the 30-year-old Gayborhood gym close, a big question loomed about what would happen to the mural of LGBT icon Gloria Casarez painted on the building's facade.

For nearly three years since the gym closed, that uncertainty lingered, but now for the first time there is hope the memorial to Casarez could be preserved – in some way.

Created in 2015 to honor Philadelphia's first director of LGBT Affairs, who died of breast cancer a year earlier at the age of 42, the mural has become an important symbol for the LGBT community, women, community advocates and people of color.

Last month, when Tricia Dressel, Casarez's widow, announced on Facebook that the mural could be destroyed to make room for a new, luxury high rise, there was a mix of outrage and disappointment shared on and off social media.

"So many family and friends helped to paint this mural back in 2015, including my parents (and Gloria's mom, Aunt Theresa and cousin Nancy who we lost in the last few years)," Dressel wrote. "It's painful for me to visualize this mural of Gloria being destroyed."

Christopher Bartlett, executive director of the nearby William Way LGBT Community Center, who is fighting to ensure that the mural remains in the heart of the Gayborhood, said, "We all felt and still feel that the stories of queer Latinx women and other marginalized queers should be centered – literally – in our community and neighborhood to make those stories visible. We want Gloria's mural on 12th Street on Gloria Casarez Way so that a whole new generation of young queers will know the powerful stories of Gloria, one of our most important queer ancestors."

The outpouring of community support prompted Dressel to make a public plea to the developers, Midwood Investment and Development LLC, accompanied by an online petition. Dressel wants the company to either incorporate the existing mural onto the new building or invest in the Philly artists who originally created it – Michelle Angela Ortiz and Briana Dawkins of Mural Arts – to honor Casarez artfully in the same location. 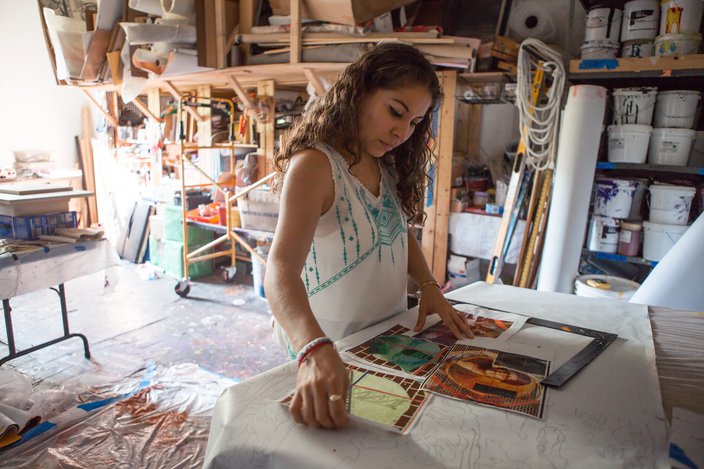 Michelle Angela Ortiz is shown here in her studio working on 'A Tribute to Gloria Casarez' on Aug. 26, 2015.

A spokesperson for Midwood confirmed to the PhillyVoice this week that the company is committed to plans to honor Casarez on the site of the new building:

"Midwood understands the significance of Gloria Casarez, her importance to the LGBTQ community and is dedicated to ensuring her legacy in the community. Midwood is committed to fully funding this effort and is in discussions with the artist of the mural, Michelle Angela Ortiz of Mural Arts Philadelphia, and William Way LGBT Community Center to create a meaningful and prominent way to honor Gloria Casarez on the 12th Street frontage of the new building."

While no further details are available at this time – like specifically whether the same mural will be recreated, and if so, how that might happen on the glass facade featured prominently in the architectural renderings of the new building –  since Midwood acquired the site two years ago, the developer has been in contact with State Rep. Brian Sims, Councilman Mark Squilla and Jane Golden, executive director of Mural Arts to come to an agreement.

Golden confirmed that she's been having conversations with Midwood for the past eight months about an issue that isn't new to the public art program. In fact, Golden has been getting very creative about saving or at least fighting for beloved murals throughout an increasingly gentrified city in recent years.

"So many family and friends helped to paint this mural back in 2015 ... It's painful for me to visualize this mural of Gloria being destroyed." – Tricia Dressel

"This has happened many times before," she admitted. "And as Philadelphia grows and changes, more landmark murals are at risk."

In its history, Mural Arts has created more than 4,000 works of public art in Philly, though only 2,500 remain. "The vast majority of murals are connected in some way to the voice of the community," she said. "They resonate with and represent our citizens. I truly believe our body of work is the autobiography of Philadelphia."

Among the other public artworks to face the wrecking ball are murals honoring jazz icon John Coltrane, community leader Herman Wrice, and Stop the Violence and Colors of Light murals. Each has been demolished to make way for new construction.

Golden said that at a meeting about the Stop the Violence mural, a community leader stood up and said to the developer, "Please know, when these murals go away, we feel like our lives are being erased."

"It was a powerful and poignant statement and shows us that murals are signs that people care, that things can change, and that art can play a powerful and catalytic role in the life of our city," Golden said.

The Casarez mural is symbolic in Erme Maula's life. After moving to Philadelphia in 1992, she came out and got involved in the local LGBT community where she met Casarez, who became both a role model and friend.

"This has happened many times before. And as Philadelphia grows and changes, more landmark murals are at risk." – Jane Golden, Mural Arts

After watching anchors of the Gayborhood close over time, she said having a mural celebrating Casarez, and specifically one that considers the work she did not only for the LGBT community, but also homelessness, anti-poverty and direct-action organizing, means something to a diverse community that faces constant changes and still many challenges.

"Having this mural in the Gayborhood helps preserve the history of the area and reminds people of how it was when we needed to go somewhere to even remotely feel like we were in community," said Maula, who helped to paint this mural along with many others in the community. "Representation matters."

While she and many in the Gayborhood would like to see the mural saved, Muala said that having corporations show solidarity with the community also would go a long way.

"If Midwood really wanted to honor her legacy," she said, "they would keep the mural and build affordable housing."

Also on her wish list: having the new developers financially support local LGBTQ organizations, and provide free space for community groups to meet or have events in the neighborhood.

Whatever happens next, the fact that public art has managed to bring so many people together, both to honor the legacy of a leader who left us too soon, and to attempt to preserve a part of an ever-changing community, is a positive sign, Dressel said.

"I am hopeful that we will come out of this in a way that honors not just Gloria's legacy, but also our Philly community and the young artists, activists and creators," she said, noting that its this new generation "who help reimagine the city landscapes when they add life, light and love to the endless walls of brick, concrete and glass that would surround us without their vision and work."