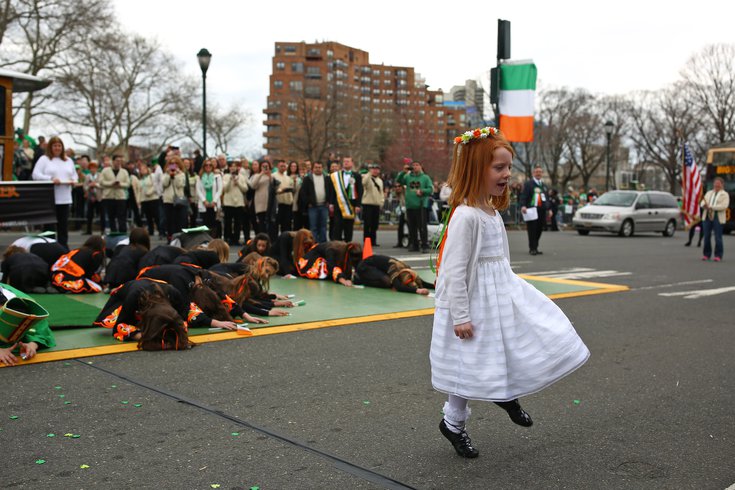 The Philadelphia St. Patrick's Day Parade returns after a two-year hiatus due to COVID-19 on Sunday, March 13. The event will commemorate the 250th anniversary of the parade.

The St. Patrick's Day Parade will return to Philadelphia on Sunday, March 13 after a two-year hiatus due to the COVID-19 pandemic.

The parade was one of the first large-scale events in the city to be canceled when the public health crisis began, and it was called off again in 2021 due to ongoing concerns about the wellbeing of organizers and participants.

Festivities will begin at 9 a.m. with the procession of the grand marshals of the parade. A commemorative mass will be held at 9:15 a.m. at the Saint Patrick's Church at 20th St. and Locust St. Light refreshments will be served before congregants head out to the parade route at 11 a.m.

The parade route will start at 16th St. and JFK Blvd. and continue to Market St. The parade will pass City Hall and head to Front St., eventually ending on Dock St. at Penn's Landing. Performances will be held at Independence Mall.

This year's parade will focus on the event's 250th anniversary, due to the cancellations in 2020 and 2021. The official theme — "250 years of faith, family, friendship, and heritage" — will focus on bringing people closer together.

"The best part of the parade for me is to celebrate and participate with three generations of my family," said Karen Boyce McCollum, 2nd vice president of the St. Patrick's Day Observance Association. "My parents immigrated from Donegal, Ireland and settled here in the Philadelphia region. It has always been a special day for our family and many families in Philadelphia and we have missed it so very much over the past two years."

A large collection of Irish dance troops and heritage organizations will walk along the parade route and perform at Independence Mall.

As the second oldest parade of any kind in the United States, Philadelphia 's St. Patrick's Day celebration has been held annually since 1771. Irish Americans have been observing the holiday in the city since the group first arrived in America, according to parade organizers.

Over the years, the parade's theme has been chosen to reflect the times and commemorate history and heritage. In 2016, the parade honored the 100th anniversary of the 1916 Easter Rising in Dublin, which was fought with the aim of establishing an independent Irish Republic while the United Kingdom was fighting in World War I.

In previous years, thousands of residents have joined the parade route to enjoy singers, Irish dancers, and different speakers. This year, organizers say to expect a crowd, particularly as Philly eases its COVID-19 restrictions.

"We are looking forward to seeing more people than ever along the parade route on Sunday, March 13 for our long-awaited 250th Philadelphia St. Patrick's Day parade," said Joe Fox, president of the St. Patrick's Day Observance Association. "We were disappointed to cancel the parade for the last two years, but now, we are more ready than ever to make it a great parade and a memorable day for all the Irish in the Philadelphia area."

The parade is meant to be a slight return to normalcy, following in-person returns of much of the city's traditions over the past several months like the Mummers' Parade in January.

For those not looking to brave the cold, CW Philly (Channel 57) will air coverage of the parade from 12 until 3 p.m.