A.J. Nola, Aaron's and Austin's father, reps both his sons for Phillies-Padres series

Aaron Nola's brother, Austin, is in town with the Padres this week, but the two are unlikely to face off 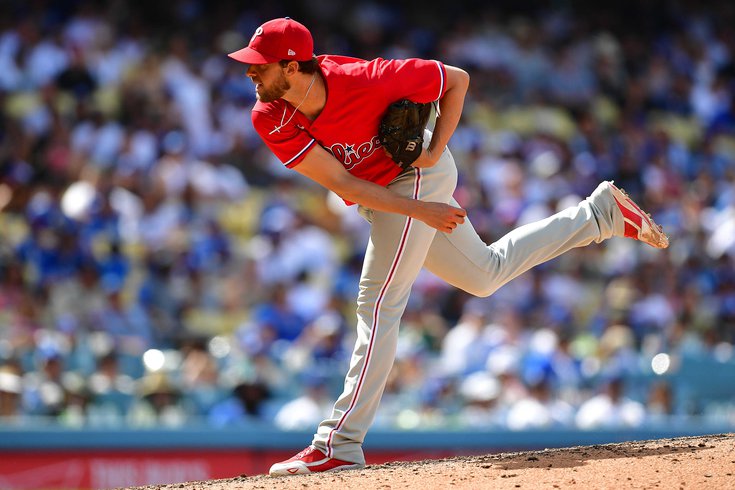 Aaron Nola pitches against the Dodgers out in Los Angeles on May 15, 2022.

The San Diego Padres are in town. So is the Nola family.

Catcher Austin Nola is expected to bat eighth for the Padres Tuesday night. His younger brother, Aaron, probably won't be pitching to him this series after throwing seven innings in Sunday's loss against the Dodgers out in Los Angeles.

Their father, A.J. Nola? Probably just hoping both teams have a good time.

Austin should start for Padres tonight so Dad is wearing Padres on top. He wears Phillies first when Aaron is pitching

“We are living the dream” pic.twitter.com/MUdWrBpiOK

The brothers played each other as major leaguers for the first time last August. Aaron got the start for the Phillies in the second of a three-game series out in San Diego. Austin was behind the plate for the Padres and slotted to bat fifth.

In the bottom of the second, they finally faced off. Aaron immediately won that battle. Three straight fastballs and a strikeout of his older brother. Austin popped out in his next at-bat in the fifth, but drew a walk from Aaron in the seventh as his Padres eventually came out on top 4-3 after 10.

“We're living a dream right now,” A.J. Nola told the San Diego broadcast while his sons faced off last season (via MLB.com). “Words can't describe it right now. I'm just trying to soak it all in and enjoy the moment, because we've been waiting for this since they were little kids.”

Austin, in his fourth major-league season and third in San Diego, is batting .215 with a homer, three doubles, and a .560 OPS through 27 games.

There won't be a Round 2 in Philly this week, but maybe that'll happen again in San Diego when the Phillies head there at the end of next month for a four-game series.

No matter what, you can be sure that A.J. Nola is still living the dream.