Is Bryce Harper on pace to repeat as NL MVP?

He can't field right now, but he sure is hittin' 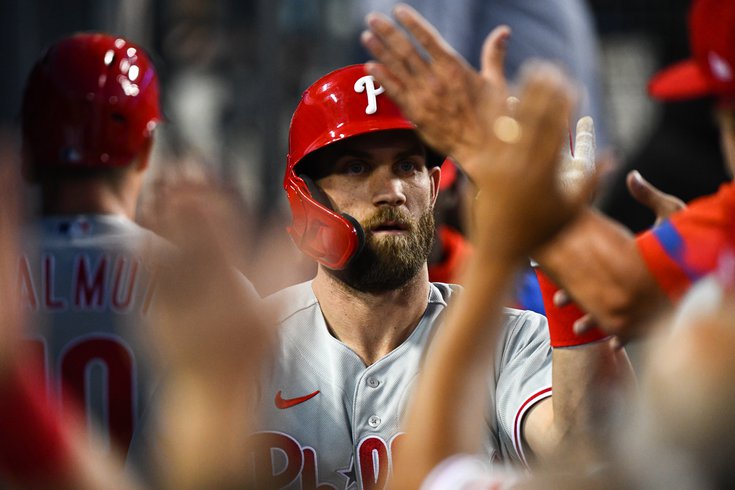 Bryce Harper in the Phillies dugout.

Bryce Harper can't play the field right now because of the UCL tear in his right elbow, but with the way he's swinging the bat, the Phillies can happily live with that.

The reigning NL MVP has been on a tear since being forced to settle in as a full-time DH.

Playing in three of the four-game series out in LA, Harper went 8 for 12 with four doubles, three home runs, and eight runs batted in. And for the month of May so far: A .396 batting average, seven doubles, six home runs, and a staggering 1.351 OPS through 12 games.

The Phillies' offense came alive out west — resulting in the club winning 5 of 7 against Seattle and then the Dodgers — and Harper has been leading the charge in the defense of his MVP crown.

“[Harper] is in a great spot and it’s great to see,” manager Joe Girardi said after Saturday's 12-10 win over Los Angeles in extra (via MLB.com). “Obviously he’s so important to our offense, but we have other guys in good spots too, which is really helping out.”

Does that bode well for Harper in a bid to win his second consecutive NL MVP award and third overall for his career?

Taking stock of how the MVPs of the past 10 years have performed through the first 34 games of their season, he does seem pretty on pace. He's even a bit ahead of what his numbers were this time last year.

Here's a breakdown of how things look with the numbers courtesy of Baseball Reference:

*NOTE: 2014 is not included because Dodgers pitcher Clayton Kershaw won the award.

And because Harper is trying to become the first back-to-back MVP in either league in nearly a decade, let's run his '21 and '22 numbers through 34 games up against the last guy to do it: Miguel Cabrera.

In fairness, prime Miguel Cabrera is a near impossible hitter to keep up with.