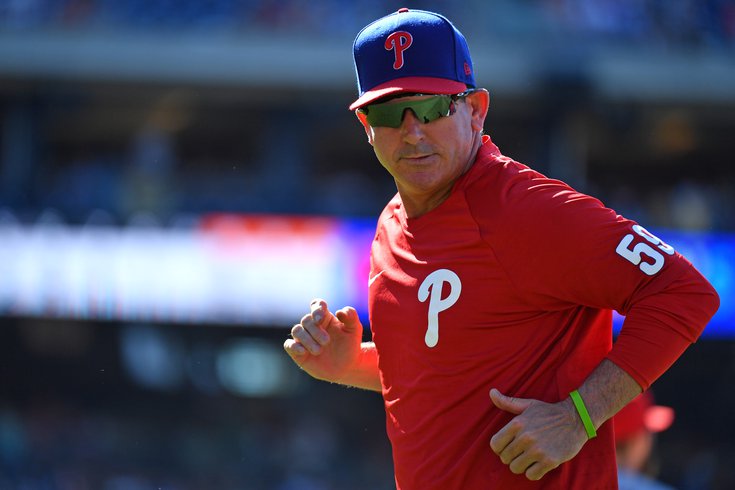 Who's the best manager in the history of Philadelphia sports: Connie Mack or Rob Thomson? Mack is only 3,723 wins ahead of "Topper" when it comes to managerial records, but there's no denying that Thomson's presence as the Phillies' interim manager has given the team a spark, one that it's been desperately missing for more than a decade now.

In a city where Jalen Hurts' passing performances in 7-on-7 practices in early June can dominate the news cycle, it's remarkable the way the Phillies have grabbed Philly sports fans' attention over the last week-plus, especially given how awful they began a 2022 season with playoff expectations. Almost as soon as Philadelphians were ready to tune out baseball in lieu of Spotify playlists at the beach, Thomson and the team have given those people a reason to care about the Phils.

For a 58-year-old Canadian former MLB player, little is known about Thomson in Philly. That doesn't matter if that fire he's lit under this club the last nine games can continue. Yes, the Phillies aren't going to win every series the rest of the season. They're not going to reel off nine-game winning streaks with ease and will eventually fall upon some losing streaks. That does not diminish the energy change that Thomson has brought to this organization.

Perhaps simply being "not Joe Girardi" is reason enough for Thomson to guide the Phillies during this hot stretch. It's a small-sample size in the grind that is an MLB season, but give props where props are due. While late-game bullpen management is key and the Phillies' pen has faired better as of late than they did with Girardi at the helm, I keep coming back to the intangible "vibes" category. Did Girardi make the Philly a terrible place to play? Did the players loathe waking up every day and playing for him? I can't speak to those answers, but maybe a laid-back environment with Thomson at the helm is just what the Phillies needed to get their heads out of their asses and play up to expectations.

It was an unquestionable for decision for me: Thomson is the easy winner of the past week in Philly sports.

A guy the average Philly sports fan didn't know existed two weeks ago now has people dreaming of a Red October. I obviously don't know if the Phils' winning ways will continue, but I do have much more faith in the direction of the '22 squad now with Thomson rather than Girardi. I love the way Thomson has faith in young players, giving Bryson Stott, for instance, a shot to shine the way he has as of late. Mickey Moniak is strugglingly mightily at the plate, but it's best for the future health of the franchise to see if he can make something of his career and Thomson has given him ample reps.

What a novel concept!