5 awards from the Phillies' series win over the Diamondbacks 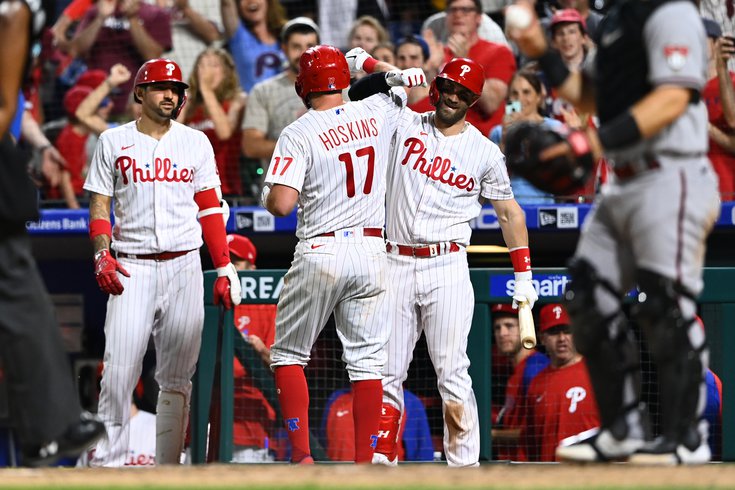 Three series wins in a row? Start saving some PTO for October! A Phillies playoff day game followed by an Eagles-Cowboys Sunday Night Football matchup? This is what the city needs.

The Phils took two of three from the lowly Diamondbacks over the weekend. They're now sitting right at 30-30 at the .500 mark, nine games back of the National League East lead and 3.5 games out of the second Wild Card spot. Are the Phils peaking too early? I'm not quite ready to have that concern troll take, as Phillies fans should soak up this ride and enjoy a summer that should filled with enjoyable baseball.

As I do, I'll give you a quick series recap and hand out five awards to the Phils:

• On Friday, the Phillies narrowly avoided another classic "Phillies" turn of events. The Phils had a 6-1 lead before surrendering four runs in the seventh inning. Seranthony Dominguez, Connor Brogdon and Corey Knebel prevented disaster out of the pen though for a 6-5 win.

• Phillies fans... forget about Sunday. The D-Backs roasted the Phils in a 13-1 blowout that came complete with backup catcher Garrett Stubbs pitching in the ninth inning. Even Rob Thomson can't go undefeated his whole career.

Did the Phillies absolutely loathe Joe Girardi or does Thomson have the best vibes of any manager in the majors? It's just one hot streak and a small-sample size for a lengthy baseball season, but it's impossible for Phillies fans not to be elated at what Thomson's presence has brought over the past nine games.

Give Him the MVP Trophy Again Award: Bryce Harper 🏆

Hey, if you didn't know, there's a guy leading the National League in slugging, OPS and total bases while playing with a torn ligament in elbow. He's Bryce Harper and, if he continues his current path of play and the Phillies can hang around in the playoff race, he should be the first Phillie since Michael Jack Schmidt in 1980 and 1981 to win back-to-back MVPs.

Here's the case for Harper winning MVP once more in 2022: If the Phillies make the playoffs, he's going to be MVP. The #narrative is there given that the Phillies have the longest playoff drought in the National League, got off to a horrendous start to the season under a big-name manager and because Harper is playing through an injury that is keeping him from playing the field. If the Phils are going to make the playoffs and bring postseason baseball back to Philly for the first time in 11 years, it'll be, more than any factor with this club, due to Harper continuing to rake like he has been.

Harper has made even the lowest moments of this Phillies season watchable because magic can happen whenever he steps into the batter's box. Continuing to win as the Phils have been, couple with Harper's power at the plate, could make this a hell of a June and July.

The National League Cy Young Award might be Marlins righty Sandy Alcantara's to lose, but Wheeler is dealing right now just as much as he was in his Cy Young runner-up campaign in 2021. His 2.84 ERA is the second-lowest mark of his career and just a tad behind his 2.78 ERA from last season. His 10.9 strikeouts per nine innings are a career best.

No Phillies player gets more hot and, conversely, more cold than Rhys Hoskins. That's saying a lot for a team that has Kyle Schwarber starting in left field every day. Hoskins went yard twice on Friday night. Over the Phillies' last two series, Hoskins is hitting .360 with an on-base percentage of .429 and a slugging percentage of .760 in 28 plate appearances.

Saying that's a welcomed development for Hoskins would be an understatement. He's still posting career lows in batting average, OBP and slugging. What's troubling is that his plate discipline has fallen off the last two seasons. His on-base percentage is .329 over that span (166 games). It was .368 in 2019-2020 (201 games). Perhaps this hot stretch for Hoskins can continue well into the summer and turnaround what's been a career-worst season.

The most recent 10 games of Stott's major league career, beginning with the first victory in the Phils' recent nine-game winning streak: batting average of .333 and a Harper-esque 1.094 OPS.

Surprise: it's almost as if having a manager who puts their faith in the young guys can pay dividends!

It's an extremely, extremely low bar to clear, but Stott could end up as the Phillies' best positional player first-round pick since Chase Utley in 2000.

The Phillies kick off a three-game home set with the Marlins on Monday night. Miami currently has a record of 27-31. Alcantara will be on the mound for the Fish against Aaron Nola.