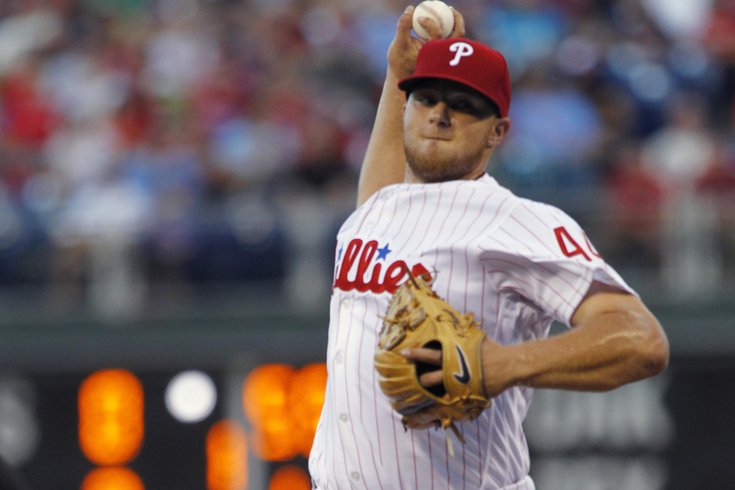 Frank Herrman was the latest pitcher summoned from Allentown on Wednesday afternoon, joining the nearly endless supply of relievers that have traveled the Northeast Extension of the Philadelphia Turnpike this summer.

And what in the world ever happened to Dalier Hinojosa?

The Phillies have had to have an almost constant line change of relievers every few weeks because, lately, the young starting pitching has been unreliable.

In the last three weeks, a 19-game span beginning on July 27, the Phillies haven’t had a single starting pitcher give them seven innings. In the last week, they’ve hardly gone more than four or five.

Phillies starters have a ghastly 7.06 ERA during that three-week period. The result has been more work from the taxed, ever-changing ‘pen.

“We just need our starters to get out of that rut now where we’re not getting six, seven, eight innings,” manager Pete Mackanin said before the game. “We’re trying to develop nine-inning pitchers. Too many high counts early in the game.”

Three starts into his big league career, Jake Thompson has yet to deliver more than five innings in a game. The rookie right-hander had trouble finding the strike zone and when he did, the Dodgers didn’t miss, as the Phillies pitching woes continued in a 7-2 defeat on Wednesday night at Citizens Bank Park.

Thompson, the 22-year-old acquired in last year’s Cole Hamels’ trade who had been dominating in the International League in June and July, has an 8.79 ERA after his first three major league games. After allowing each of the first two batters to reach in the fourth inning of Wednesday’s game, on a single and a walk, Thompson fell behind to Adrian Gonzalez.

Thompson tried to sneak a 91-MPH fastball by Gonzalez on a 3-1 pitch. Gonzalez made like teammate Chase Utley a night earlier and annihilated it for the first of two home runs on the night.

"It was supposed to be a two-seamer away and it was a two-seamer right down the middle," Thompson said. "Not a good idea to him. I just (have to work on) keeping the ball down."

Two batters after Gonzalez’s first home run turned a 1-0 deficit into a 3-1 Dodgers lead, Thompson was visited on the mound by pitching coach Bob McClure. Of the first 69 pitches Thompson threw in the game’s first 3 1/3 innings, only 33 were strikes.

Thompson would walk another batter (he had four on the night) and serve up another home run (a two-run shot to Justin Turner) before his night was deemed over at five less than spectacular innings.

In his first three games since making his own way down from Allentown, Thompson has allowed three home runs, walked nine, and struck out 11 in 14 1/3 innings.

"The interesting thing is that he doesn’t walk that many people, but he’s got 9 in 14 innings," Mackanin said. "I attribute that to the fact he’s 22 years old and his first go-around at the big league level. Pitching is all about repeating your mechanics and making good pitches. In time, he’ll get there."

Thompson was able to stay confident following his latest shaky effort because he remembers his first three starts at Triple-A Lehigh Valley this season: he took a 6.16 ERA into May. His ERA shrunk to 2.50 by the time he left Allentown for Philadelphia.

"It's kind of how pitching goes," Thompson said. "Every now and then you struggle with stuff. I dealt with it in Lehigh. I had a terrible first month of the season, partially due to the same thing -- erratic fastball command. We'll get in the bullpen and get it ironed out."

With Aaron Nola (out for the season following a visit with Dr. James Andrews) and Zach Eflin (very likely out for the rest of 2016, too, with knee tendinitis and a stress fracture in his right foot, with Vince Velasquez’s workload likely leading to being shut down at some point in the next month, it’s difficult to imagine the Phillies starting pitching problems will get any easier in the season’s final six weeks.

“This just reinforces that we're always going to have pitching depth and pitchers at the big league level that are ready to take the ball, and pitchers at the Triple-A that are ready to take the ball,” general manager Matt Klentak said on Wednesday afternoon. “Because for four months, this team's starting rotation was about as healthy as any starting rotation in baseball, and for the last two, three weeks it's been something less than that. That's kind of the nature of our game.”

In addition to injuries to Nola and Eflin, former No.1 overall pick Mark Appel had an incomplete 2016 when he had to undergo season-ending elbow surgery in June, after uneven results at Triple. In the season’s first month, veteran Charlie Morton was lost for the year with a hamstring injury.

With the uncertainty of young pitching, and the fragile state of pitchers’ arms in general, the Phillies are likely to shop for starting pitching on the free agent market despite the presence of five promising pitchers in their rotation earlier this month.

“We still have six weeks left to go in the season,” Klentak said. “Medically, whether it’s Eflin or Nola, we still have time. We need to figure some more things out. The honest answer is I think it’s fairly reasonable to expect that every offseason we’ll be looking to add starting pitching depth.

“It could be a veteran starter, it could be Triple-A depth, it could be multi-year contracts, it could be a swingman, there’s a lot of different ways to skin that cat. But I think realistically this offseason will be no different than any other. We’ll always be looking for starting pitching.”

Joseph's home run landed in the second deck of seats in left field and made it a 5-2 Dodgers lead.

"I wish the bases were loaded on that at the time," Mackanin quipped afterward.

Mackanin, like everyone else in the ballpark, didn't quickly forget what happened after Joseph's home run in the sixth inning: each of the next three batters reached (Maikel Franco, Carlos Ruiz, and Freddy Galvis hit consecutive singles) but the Phillies failed to score. Bases loaded, no one out ... no runs.

After Galvis's single loaded the bases, Phillies batters hit three consecutive fly balls to the outfield. Franco probably should have scored on the first, a ball hit to right fielder Josh Reddick.

Franco isn't exactly the fastest of base runners, but Reddick's throw went into second base, not headed toward home plate.

"You stay heads up and the minute you see that ball go into second base, you score," Mackanin said. "He just shut it down a little bit early."