But given the COVID-19 outbreak, is it even ethical for Dominguez to have elective surgery now? 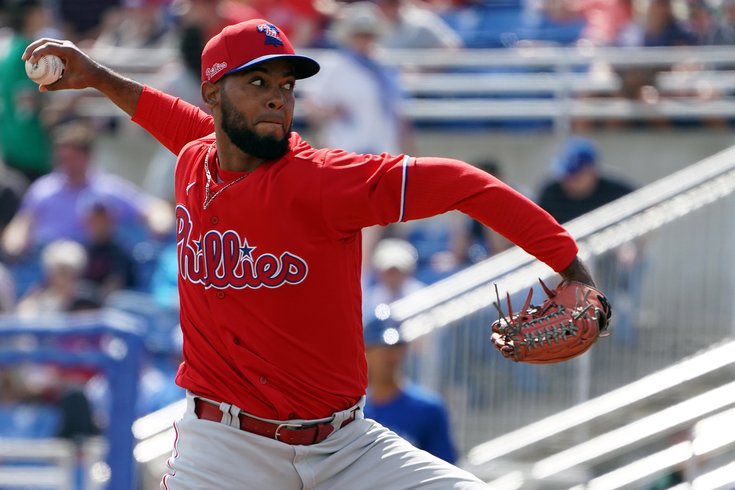 Just a few short weeks ago, albeit in much different times, things were looking up for Phillies reliever Seranthony Dominguez. After spending the second half of last season resting his ailing elbow in the hopes of avoiding Tommy John surgery and being able to pitch in 2020, Dominguez was back on the hill for the Phillies in spring training and hoping to return to his 2018 form, when he looked dominant as the team's closer.

Then spring training — and the entire sports world — came to a crashing halt after just two scoreless innings for Dominguez.

And now, with the entire season in limbo, he could be headed for that Tommy John surgery after all. According to reports, at least one doctor has suggested to Dominguez that he get the surgery, which typically comes with a year-long recovery, now. However, the 25-year-old reliever hasn't decided what he wants to do.

Here's more from Scott Lauber of The Philadelphia Daily News:

No matter how long it takes for the 2020 baseball season to begin, it might be much longer before Seranthony Dominguez pitches again.

It has been suggested to Dominguez that he undergo a reconstruction of the ulnar collateral ligament in his right elbow, a source close to the Phillies reliever said Monday evening. The procedure, commonly known as Tommy John surgery, typically sidelines a pitcher for at least 12 months.

But Dominguez has not yet decided whether to go through with it. Tests aren’t conclusive for a tear in the ligament, according to the source, so Dominguez has returned to the Dominican Republic with plans to rest his arm while baseball is shut down by the coronavirus pandemic. When (or if?) the Phillies resume spring training, he intends to go for additional testing to determine if there has been improvement.  [inquirer.com]

Last June, when he first hurt his elbow, Dr. James Andrews suggested a course of platelet-rich plasma injection and rehab over surgery and based on his performance this spring, it seemed like that had done the trick. However, Dominguez felt "tightness" in his elbow after his final outing of the spring against Toronto and ultimately went for an MRI after the pain didn't subside.

It's likely the results of that MRI that led his doctor to suggest surgery to repair his ulnar collateral ligament (UCL), which by having now would at least give Dominguez a chance to be ready for the start of the 2021 season, or at least close to it.

And that's a shame for Dominguez, who was looking close to healthy. In 2018, he broke out with 16 saves and a 2.95 ERA in 53 appearances. In 2019, he took a step back as he lost the closer job to Hector Neris and appeared in just 24 games (4.01 ERA) before the elbow injured derailed his season.

The issue for Dominguez now involves more than just the decision of whether or not to have the surgery. While getting a jump on the surgery and recovery while baseball is in a standstill seems like a great idea, it's much more complicated than that.

With most states, including Pennsylvania, currently forbidding elective surgery, simply being able to have the procedure done is hardly a foregone conclusion. That being said, New York Mets starter Noah Syndergaard and Boston Red Sox starter Chris Sale both had Tommy John surgery in the last week, so there are ways for MLB clubs to work around the restrictions — even if it's not entirely ethical to do so.

Over at SI.com, Emma Baccellieri spoke to medical ethicists about whether or not elective surgeries like this should be happening amid the COVID-19 outbreak, when many hospitals are overflowing with patients and medical supplies are increasing hard to come by.

But the question of can a player have Tommy John surgery is different from the question of whether one should. And medical ethicists say that a procedure like Tommy John—which pitchers need to throw hard, but not to lead healthy off-the-field lives—is hard to justify in the middle of a pandemic.

“At the present time, I don’t think there’s even a question that it would be inappropriate and should not be done in any areas that are hit hard by COVID,” says David Magnus, a professor of medicine and biomedical ethics at Stanford and the former chair of the ethics committee for Stanford Hospital. “And I think it’s arguably a bad idea to do anywhere right now…. Even in areas where there have been no reported cases, or very few, and it hasn’t spread yet, that’s changing by the hour. Maybe right at this moment, they don’t need the space, or the personnel that would be involved in the procedure, but that can change so rapidly that I think it would be an irresponsible use of resources. Nobody should be doing this.”

It’s not that the orthopedic specialists who perform the surgery would likely otherwise be responsible for coronavirus patients. But the equipment—such as masks—could certainly be needed. So could the physical space and the other staff, such as nurses, especially when all sorts of nontraditional areas in hotspots—even New York's Central Park—are being converted to treat patients and retired medical personnel are being asked to return to the field.  [si.com]

But it gets even more complicated for Dominguez, should he want to get the surgery done somewhere in the United States. Currently, the Phillies reliever is home in the Dominican Republic, and based on Lauber's reporting, it doesn't sound like Dominguez plans on making a decision on whether or not he's going to go under the knife until he's able to return to the team facilities and get further testing.

If that's the case, it doesn't seem like the decision to get Tommy John would be something he has the luxury of making simply because baseball isn't going to be played anytime soon — and therefore he wouldn't miss as much time when there are actual games being played. Instead, it seems like the decision is going to come down to whether or not he needs the surgery. And if that's the case, we've seen the last of Seranthony Dominguez in 2020, whether there's a baseball season or not.

UPDATE [6:30 p.m.] — According to the Boston Globe, the world's leading doctor when it comes to Tommy John surgery, Dr. James Andrews, has shut down his facility in Florida amid the coronavirus outbreak.

A spokesperson for the Andrews Institute for Orthopaedics and Sports Medicine in Florida — the facility where Dr. James Andrews performs ulnar collateral ligament reconstruction (better known as Tommy John surgery) — said the Institute has stopped performing the procedure at this time.

“We are not performing any non-urgent or non-emergent procedures, including Tommy John surgery, in compliance with the governor’s executive order,” the spokesperson wrote. ”We are adhering to these restrictions and all such cases are suspended at this time.”  [bostonglobe.com]

There are still other doctors performing the surgery, but by the time Dominguez returns to the country to get further testing and decide whether he wants to go forward, those facilities could be shut down as well.