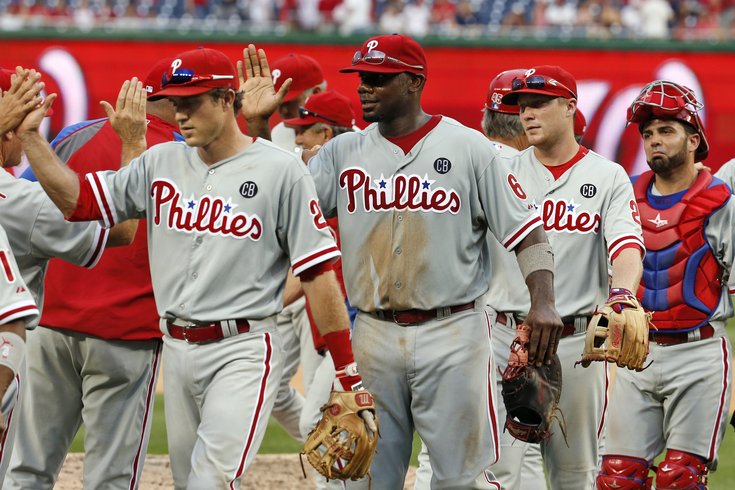 It's here. Finally. So as you sit inside and look out at the snow on the ground, take solace in this: pitchers and catchers begin working out on Thursday, followed by the rest of the team early next week.

Unfortunately, expectations for the Phillies -- at least in terms of wins and losses -- are as low as they have been in over a decade. And you'll see that's a common theme throughout this preview, because there are several unfortunate circumstances surrounding the club.

But that doesn't mean you shouldn't be excited. At the very least, spring training is a friendly groundhog that never sees its shadow. And if you can't get over the fact that your team is predicted to be the worst in baseball, just think of it as being one step closer to the return of football.

And if that doesn't help, go stick your face in the snow.

Here's the first, a look at the Phillies' spring training roster as it pertains to the infield:

Ryan Howard, 1B* - His contract is so bad that Amaro can't trade him.

Unfortunately...that's the same reason you can't sit him and make room for a guy like Maikel Franco. That's the situation you're in, Phillies fans, so deal with it.

Unfortunately...his age and injury history would suggest that his second half struggles had more to do with internal, rather than external, factors. Also, he's not Benjamin Button.

Cody Asche, 3B* - He took a step forward in 2014, which was good to see from the 24-year-old corner infielder. But he better hope he doesn't get off to a bad start this season, because Franco isn't far behind.

Unfortunately ... he's yet another left-handed hitter in an already lefty-heavy lineup. Franco, on the other hand, is right-handed, so there could be a chance for a platoon situation at some point this season. But some silver lining here: Asche hits left-handed pitching (.698 OPS) as well as he hits righties (.696 OPS).

Freddy Galvis, SS* - He'll never be Jimmy Rollins, at least not at the plate. Say what you will about Rollins' plate discipline and penchant for popups, but he brought a decent amount of power from the shortstop position, something Galvis just doesn't possess. However, Galvis is more than capable of playing the position defensively and has 171 games of experience under his belt, which should make the transition somewhat more manageable.

Maikel Franco, 3B/1B - After he tore through the Dominican Winter League playoffs (.337/.344/.570 with four home runs in 22 games), Franco has been much discussed this offseason. When will he join the Phillies this season? Will he replace Howard at first, Asche at third, or will he be forced to watch from the bench? Can he continue* his impressive hitting this spring?

*Remember, he hit just .179 in 56 at-bats during his 16 games with the Phillies last September.

Unfortunately ... because of his late-season call up, Franco will almost certainly start the season in the minors. If he plays the full season with the Phillies, he'll be eligible to be a free agent in 2020. On the other hand, if he spends the first part of the season in the minors, that eligibility will be put on hold for another year. That may seem like a long ways off, but they Phillies won't be contending this year anyway, so why risk losing a guy that may wind up being a key cog in your lineup when you actually plan on contending. Furthermore, that extra year under contract could be enticing to a potential trade partner, should Ruben Amaro and Co. decide to go that route.

More unfortunately ... Asche is blocking Franco at third. Asche -- or Franco -- could be moved to first, but Howard is blocking both there, and he doesn't seem to be going anywhere anytime soon.

Unfortunately ... he's yet another left-handed hitter. And second base seems pretty set, at least for now. But because he came via the Rule 5 draft, Herrera must spend the entire season on the 25-man roster or the Rangers will have the option to take him back. Considering he also plays shortstop, he adds much needed depth at a position where the Phillies desperately need some.

Cesar Hernandez, 2B - Hernandez is likely to start the season on the bench, and like Herrera will probably be on the roster the entire season, but for a slightly different reason -- the Phillies have used up all his minor-league options.

Unfortunately ... I'm out of negative things to say about the infield, so let's move on.

Andres Blanco, 2B/3B/SS - Because he plays multiple positions, there's a good chance you see Blanco on the big-league roster at some point this season. He appeared in just 25 games last season, but that was before Rollins was sent to Los Angeles. Don't be surprised if he spends more time in Philly and less time in Lehigh Valley this season.

Chase d'Arnaud, 2B/3B/SS - He hit .250 last season with the Pirates triple-A affiliate, but has just a .208 career average in  157 big league plate appearances, most of which came way back in 2011. At 28, he's the older brother of former Phillies prospect Travis d'Arnaud, who is now with the Mets.

J.P. Crawford, SS - It seems as though Crawford, the organization's top prospect, is still a year away from seeing significant time in the bigs. He could be a September call-up, but look for Crawford to replace Galvis in 2016 if he struggles again this season.

How will Galvis due in what is shaping up to be his first full season as a starter? It'll be worth monitoring not only what Franco does at the plate, but where he's hitting in the order. Rollins had been a mainstay near the top of the Phillies order for over a decade. Odds are Galvis will be near the bottom of the order, so where will Rollins numbers be made up?

Right side of the infield

With two aging lefties at first and second, it will be interesting to see how they play this season, and if both are still with the club after the trade deadline. If Utley can replicate his first-half numbers from last season -- and keep them going after the break -- the Phillies may try to move him. At least the disparity between his play and his pay is not nearly massive as Howard's.

When will the team's No. 3 prospect make the jump to the majors? Probably at some point after May. The real questions are as follows: Who will he replace? And will he stick with the club, or will he underperform and be sent back down to get more work.

Why can't they just trade Howard?

I'll continue to add to this with each preview that comes out this week, but for now, here's how I see the infield looking when the Phillies open the season against the Red Sox:

*More on Ruf Wednesday when I preview the outfield.

What they're saying about the infield

• Todd Zolecki of MLB.com writes that there's still a chance Franco opens the season with the Phillies, but in order for that to happen, he would need to have an "unbelievable spring."

• Jake Kaplan of the Inquirer says that no matter where Franco starts the season, Asche is blocking him at third. Unless Asche switches to another position, which may be why the Phillies had him working on outfield drills last week.

• Speaking of making positional changes, Matt Breen of the Inquirer writes that Herrara, whom he calls one of the more intriguing players heading into spring training, may get a look in the outfield so the Phillies can "utilize his speed."

• David Murphy of the Daily News points out the fact that all of the Phillies infielders are left-handed hitters, which could be a problem at the plate.

• Jim Salisbury of CSNPhilly.com writes that Franco's best position is third, and scouts believe his upside is greater than that of Asche.

• Zolecki also says that Amaro may need to "go outside the organization" for help at short, mainly because Galvis is the only actual shortstop on the roster. If Galvis were to get hurt, Hernandez could fill in, as could Blanco or d'Arnaud, but they could certainly use some depth.

Meghan Montemurro of The News Journal writes that in order for the Phillies to begin their rebuild in earnest, they must first get rid of Howard and Utley.

• John Stolnis of The Good Phight discusses whether or not the Phillies should go after Cuban infielder Yoan Moncada. While he notes that they aren't rumored to be aggressively pursuing the coveted international prospect -- and signing him would mean they couldn't sign any international players for two full signing periods -- he says they "absolutely should sign Moncada if they can."