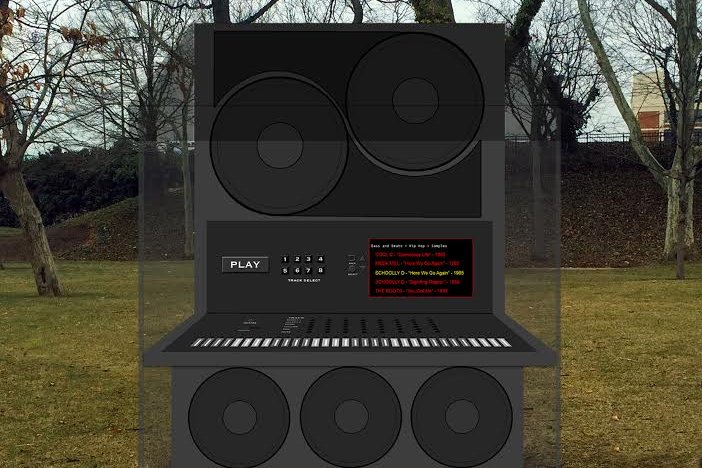 A boom box may be a foreign concept to younger people more accustomed to streaming music through a phone or laptop, but artist Kara Crombie will nonetheless place a giant one right in the middle of Franklin Square with the goal to reach and inspire Philadelphia's youth.

The sculpture, titled "Sample Philly," is a highly interactive, programmable drum machine. It will play music loops, including music reflecting the history of sound in Philadelphia, and give kids the chance to learn more about music in the city and the possibility of making their own musical ideas come to reality.

The project will be available to the public beginning July 15 as a sneak preview of Mural Arts’ Monument Lab series, a nine-week project that will launch officially on Sept. 16 and asks 21 artists to create their vision for a monument that represents Philadelphia. The projects will be scattered across the city in 10 different locations in the hopes of sparking conversation about Philadelphia’s history and future.

“It will provide an outlet for musical creativity in a time when art education has been cut back in Philadelphia and tools of musical expression are inaccessible to many children in the city,” Mural Arts said of "Sample Philly" in a statement.

In creating the sculpture, Crombie worked for a year with teenagers at The Advocate Center for Culture and Education as they recorded and produced their own music. The workshops have helped provide the marginalized youth of Philadelphia with access to music production tools, which the project hopes to continue.

“Franklin Square has been developed in recent years as an ‘amusement oasis’ with attractions geared toward family entertainment,” Mural Arts said in a statement. “This monument will not only fulfill this agenda but also serve as a gateway for children of Philadelphia to become acquainted with the city’s musical history."

The monument will be free and open to the public. For more information on the full Monument Lab project, click here.